A 17-year-old girl is dead and two others have been injured during a shooting at an Alabama high school.

Authorities are reporting that the incident at Huffman High School on Wednesday afternoon was accidental.

The 17-year-old girl, who friends have identified at Courtlin Arrington, died during transport to the hospital.

Sources say the shooting occurred when a 17-year-old boy showed off a gun to girls in the school before it discharged, according to the Atlanta Journal-Constitution. 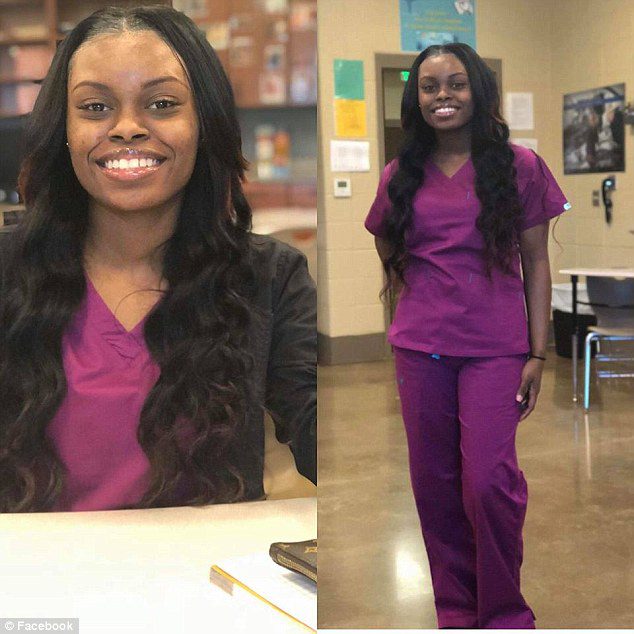 A 17-year-old girl, Courtlin Arrington, who friends have identified as an aspiring nurse, was killed during what police said was an ‘accidental’ shooting at Huffman High School 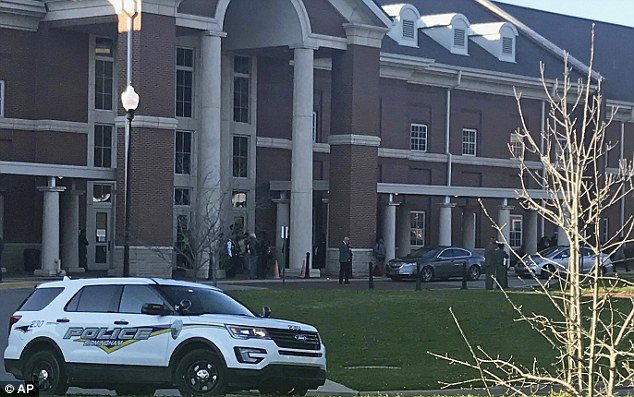 Two others were also injured at Huffman High School (pictured) in Birmingham, Alabama

It has been reported that the boy then shot himself in the abdomen while putting the gun back in his pants after accidentally shooting Arrington.

Hospital officials revealed the boy had been shot in the leg and was released from the hospital before 7.30pm that night.

The boy was later questioned at police headquarters, detectives confirmed to WBMA.

A school employee was also wounded during the incident. They were treated at the scene and released.

Birmingham City Schools has confirmed that two students ‘were involved in a shooting during dismissal’.

‘The school was placed on a brief lockdown, and police were called to the scene,’ the statement read.

‘Students have been released and police are actively investigating the circumstances surrounding the shooting.’

The gun has since been recovered by Birmingham Police.

Birmingham Police Chief Orlando Wilson offered his condolences to the victims’ families during a press conference following the shooting. 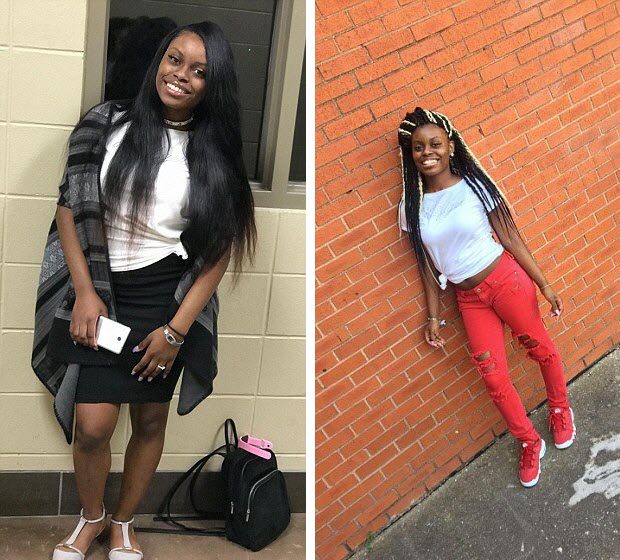 Arrington died during transport to the hospital. She was just 30 days away from turning 18 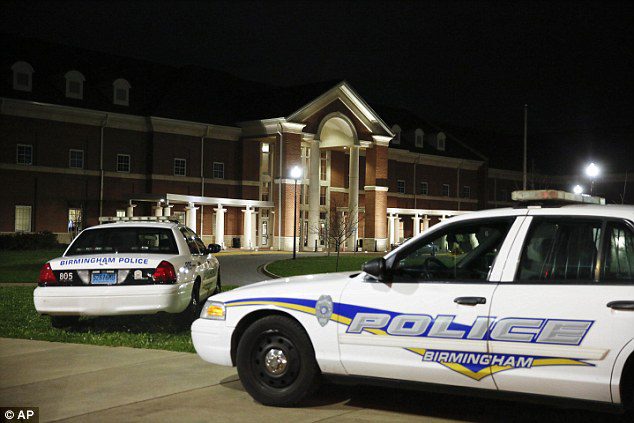 ‘Right now we have a lot of unanswered questions,’ he said.

Wilson said the shooting would be considered accidental ‘until the investigation takes us elsewhere’.

He would not confirm who fired the shots but said there were cameras inside the school and that police planned to review the footage.

‘We are not saying he shot her or did not shoot her. We are saying shots were fired,’ he said during the conference, according to WDAM.

The police chief also said that students were being questioned. He did not know if there had been a struggle for the gun before it went off.

Superintendent Lisa Herring said she considered both of the students to be victims. 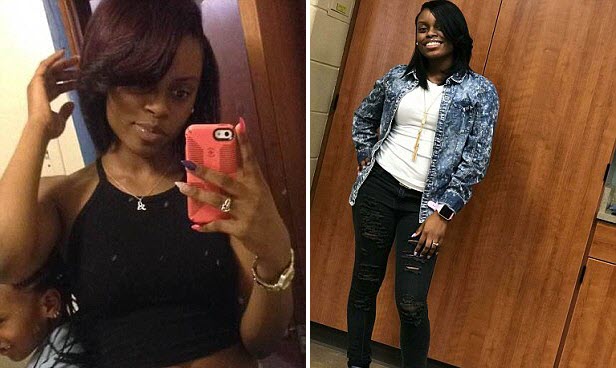 Tributes have begun to pour in on social media for Arrington, who was excitedly counting down the days until her senior prom 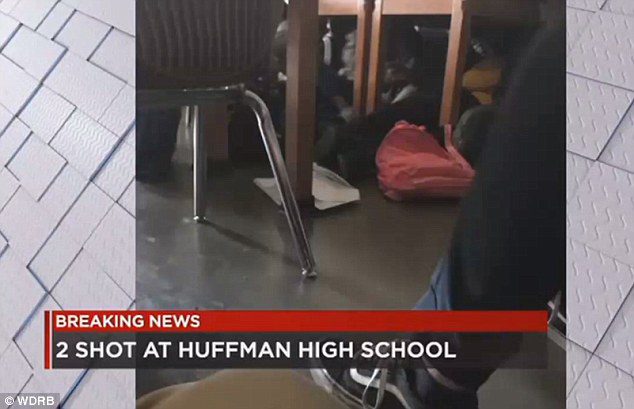 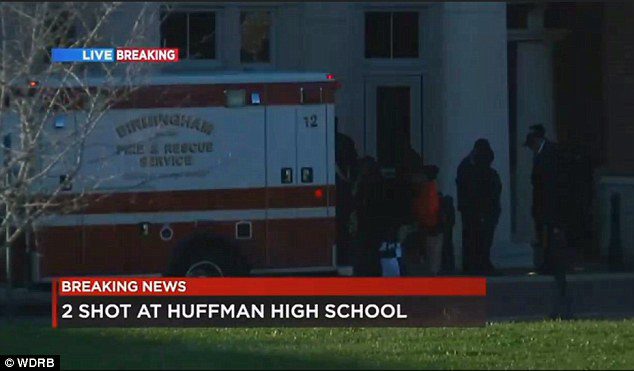 Birmingham Mayor Randall Woodfin gave a tribute to the young woman who was killed, saying she was just ’30 days away from being 18.

‘We lost a person, not just a person, but a student,’ he said. ‘Someone’s daughter, someone’s best friend.’

‘She was 30 days away from being 18 and had been accepted into college. We need to wrap our arms around Huffman High School.’

Alabama Gov. Kay Ivey said the accident reaffirmed that students should not be allowed to have guns at school.

‘I’m saddened to learn of the death of the Huffman student,’ she said in a statement.

‘I’m praying for the family of this young lady who tragically lost her life way too early. Every life is precious and even though it was an accident it reaffirms there’s no place for students to have firearms on campus.’

Alabama Rep. Terri Sewell also gave her condolences to the family and said it was time for Congress to stop settling for ‘symbolic gestures’‘.

‘My heart is breaking for those hurt and killed in the shooting at Huffman High School,’ the Democratic congresswoman said in a statement.

‘I cannot imagine the grief of the parents who lost their little girl today to gun violence. She was part of our community’s future.’

‘We have a responsibility to protect our schools from gun violence, accidental or otherwise.’

‘Every year more students and teachers, sons and daughters, and brothers and sisters are killed in school shootings – we need to do everything in our power to make this incident the last.’ 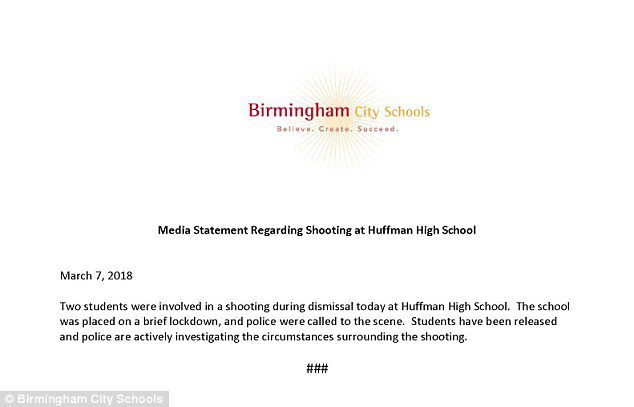 DeVos visited the high school on the first full day of classes after 17 students were killed on Valentine’s Day.

She laid a wreath outside the fence of the building, in a tightly-scripted appearance that had her accompanied by a trio of students from the school paper, a broadcast student, and one from the school yearbook.

Numerous students revealed on Twitter that DeVos refused to meet or speak with them during the visit, which was also closed to the press.

The visit came on the same day the Florida House passed a school safety bill that includes new restrictions on rifle sales and a program to arm some teachers, sending the measure to the governor for his signature.

The bill would raise the minimum age to buy rifles from 18 to 21 and create a waiting period on sales of the weapons.

It would also create a so-called guardian program that would let school employees and many teachers carry handguns if they go through law enforcement training and if the school district decides to participate in the program.

Other provisions would create new mental health programs for schools, establish an anonymous tip line where students and others could report threats to schools, ban bump stocks and improve communication between schools, law enforcement, and state agencies.