A man who was convicted of a hate crime after he filmed a pet dog giving Nazi salutes and put the footage on YouTube has been given a £800 fine. 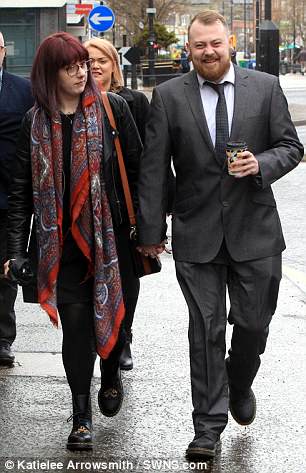 Mark Meechan was sentenced after a landmark ruling found him guilty of posting a video which was ‘grossly offensive’.

The 30-year-old taught his girlfriend’s pug to react to the words ‘gas the Jews’ and filmed it for his YouTube channel last year.

The stunt provoked outrage after being posted on YouTube where it has more than three million views.

Meechan has been given six months to pay the fine.

He was sentenced by Sheriff Derek O’Carroll at Airdrie Sheriff Court today.

Meechan, of Coatbridge, Lanarkshire, denied any wrongdoing insisting he had made the video to annoy his girlfriend Suzanne Kelly, 29.

But he was found guilty under the Communications Act of posting a video which was grossly offensive because it was ‘anti-Semitic and racist’ and aggravated by religious prejudice.

Speaking outside court, where he was cheered by around 100 supporters including far-right activist Tommy Robinson, Meechan said: ‘I’m not going to pay the fine because we are going to appeal. 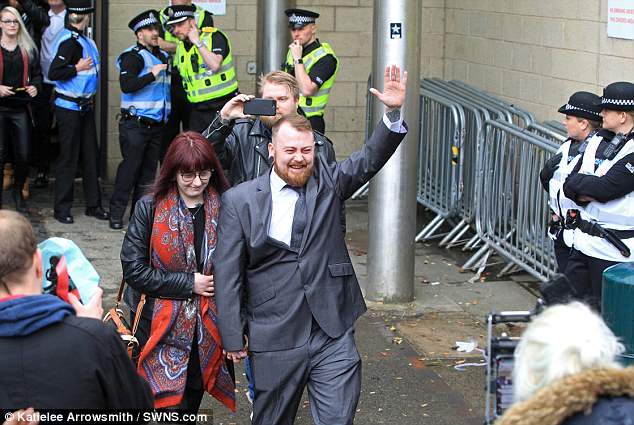 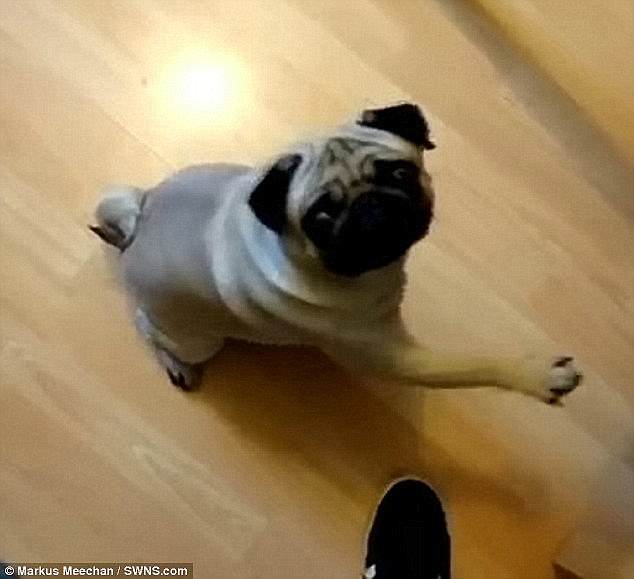 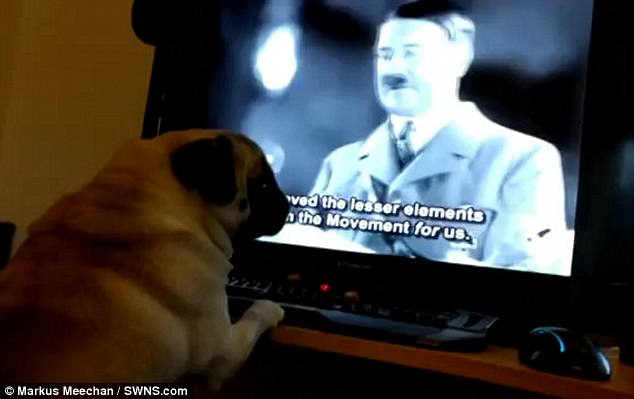 ‘This sets a very dangerous precedent because the court is deciding what people can say.’

Last month, Ricky Gervais took to Twitter to throw his support behind Meechan after he was found guilty.

Gervais took a strong stance against the verdict, tweeting: ‘A man has been convicted in a UK court of making a joke that was deemed ”grossly offensive”.

‘I f***ing hate religion. I’ve criticised and ridiculed it for 40 years.

‘Yet if my government tried to ban it or criminalize it, I would march alongside those poor fools and fight hard for their right to believe any f***ing stupid nonsense they chose.’

Ross Brown, defending, said: ‘This court made Mark Meechan a criminal. Up until this point, he was a man who had no involvement with the law. 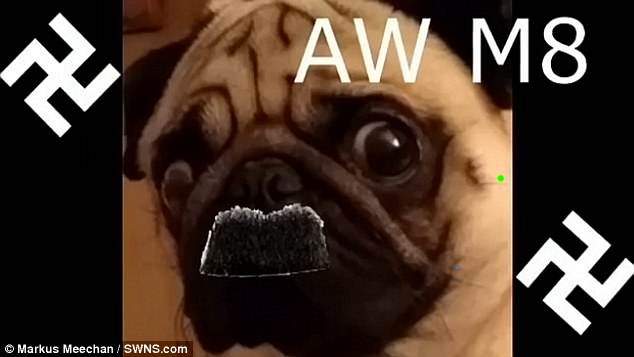 The self-proclaimed comic was charged under the Communications Act and the offense is punishable by up to two months in prison. Pictured: The pug featured in Meechan’s video

‘He considered himself a liberal man. To be branded a criminal is a punishment.

‘The difficulty it seems is that he was someone who enjoyed shock humor, both giving receiving it and went about his life under the impression that he lived in a jurisdiction which gave him the right to fully express himself.

‘This was not the perception Police Scotland had on receiving a notice that the video had been posted online.’

He added: ‘Mark Meechan does not want to go to jail but is prepared to do so so he remains true to his belief that freedom of expression is at the very core of our democracy.’

Prosecutors had earlier asked for Meechan to be convicted and branded the video ‘an odious criminal act that was dressed up to look like a joke.’

The depute fiscal added: ‘He is a highly intelligent and articulate individual, we are not dealing with some callow youth who is inexperienced with what is going on in the world.

‘The Crown contention is that the inclusion of the dog is an attempt to muddy the waters around him making, producing and posting the video. 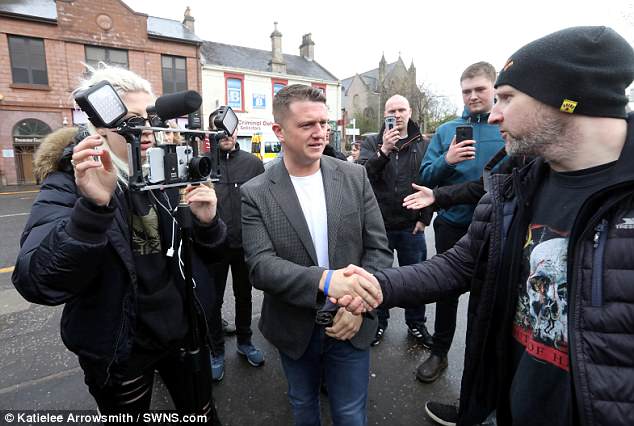 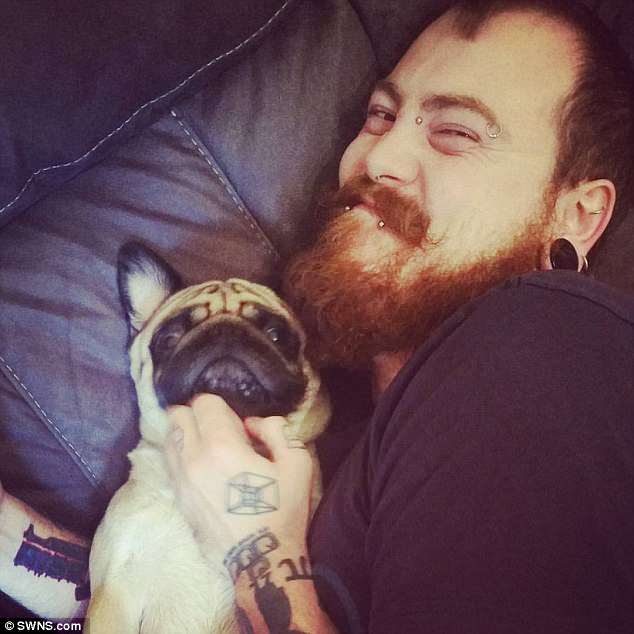 In the video the dog is seen perking up when it hears the statements and appears to lift its paw to the ‘Sieg Heil’ command in the video and is also filmed watching a rally led by Hitler at the 1936 Olympic Games in Berlin.

Sheriff O’Carroll had earlier told the court he did not believe Meechan had made the video only to annoy his girlfriend and ruled it was anti-Semitic.

Fining Meechan, he said: ‘You deliberately chose the Holocaust as the theme of the video.

‘I also found it proved that the video contained anti-Semitic, and racist material, in that it explicitly and exclusively referred to Jews, the Holocaust and the role of the Nazis in the death of six million Jews in a grossly offensive manner. You knew or must have known that.

‘The social work report on you is important. It is very favorable to you and, leaving aside the circumstances of this offense, shows you to have led a generally pro-social life thus far.

‘It also shows that you have learned a certain amount from your experiences and that you are at low risk of reoffending. 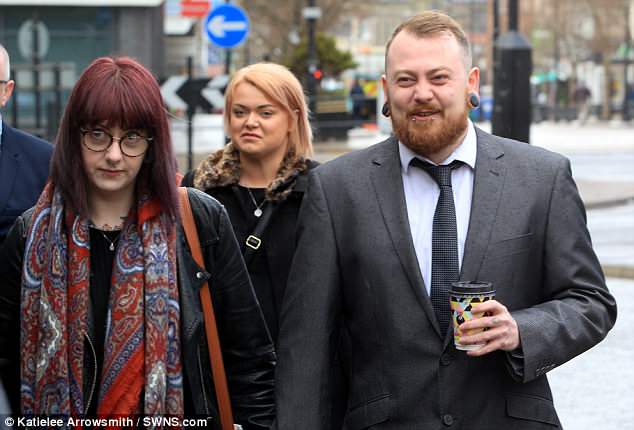 Meechan, of Coatbridge, Lanarkshire, denied any wrongdoing insisting he had made the video to annoy his girlfriend Suzanne Kelly, 29 (left)

He said: ‘His difficulty, it seems, was that he was someone who enjoyed shock humor, both giving and receiving it and went about his life under the impression that he lived in a jurisdiction which permitted its citizens the right to freely express themselves.’

He said his client was concerned about the impact his conviction may have on comedians such as John Cleese, Frankie Boyle, and Ricky Gervais if they were to come to Scotland due to the material referenced in some of their acts.

Speaking outside court after sentencing, Meechan said: ‘I’m going to appeal against it. He says it doesn’t set a precedent, it does set a precedent, a really, really dangerous precedent has been set for people to say things, their context to be completely ignored and then they can be convicted for it.

‘You don’t get to decide the context of what you said, other people don’t get to, the court gets to, that’s dangerous.’

The 30-year-old said of the video: ‘It’s the juxtaposition of having an adorable animal react to something vulgar, that was the entire point of the joke.’ 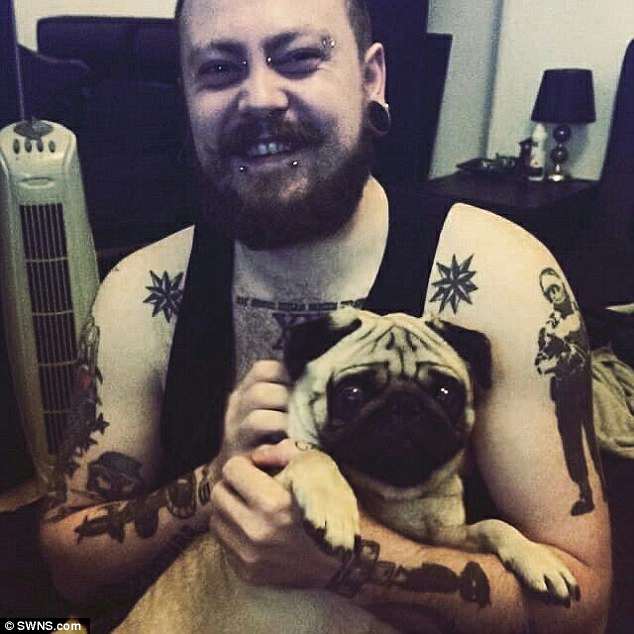