When a homeless man used the last $20 in his pocket to buy gas for a stranded motorist, what she did next changed his life. He said he did it because he feared for her safety. 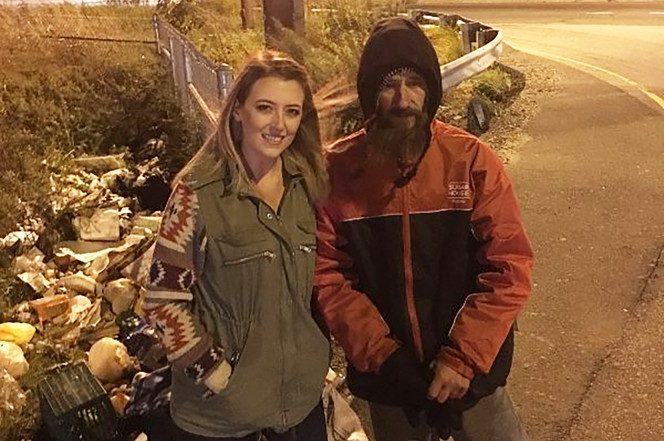 Kate McClure, 27, and her boyfriend, Mark D’Amico, 38, began a fundraising campaign for the ex-Marine and firefighter Johnny Bobbit Jr. That fund has already raised more than $65,000.

McClure ran out of gas on I-95 at night while driving to meet a pal in Philadelphia. When she began walking toward the nearest gas station, Bobbit told her to get back in her car and lock the doors.

Bobbit then went to the gas station and spent his last $20 to buy her gas.

“He came back and I was almost in shock,” McClure said.

Bobbit wanted nothing in return, however, McClure and her boyfriend drove by his spot several times in recent weeks, repaying him for the gas money and dropping off clothes.

“We went to Target and got him a big backpack filled with stuff, and he opened the granola bars and offered us one,” she said. “We are like, ‘We just got this for you.’ He’s extremely generous.”

They were so touched by his selflessness, that they started a fundraising campaign for Bobbit with a goal of $10,000, or enough to cover “first and last month’s rent at an apartment, a reliable vehicle, and 4 to 6 months worth of expenses.”

Bobbit is in “shock,” the couple said.

“We went from a room for four to six months, and now we are looking at apartments for the year,” D’Amico said.

To their amazement, the money keeps pouring in for the 34-year-old Bobbit, a Marine Corps vet from North Carolina who also worked as a firefighter and paramedic before he fell on hard times.

“Some lady offered to pay his rent for a year,” D’Amico added.

“We are going to pick him up. Take him shopping,” D’Amico said.

Bobbit, who is from North Carolina, has been homeless for a year and a half. He began living under a bridge after he was robbed in a shelter.

“He came back from his service in the marines and for some reason, it didn’t work out with his wife and it hit him hard,” D’Amico said. “He left North Carolina and started traveling around the United States.”

Bobbit wants to work at Amazon. And luckily, a recruiter from the tech giant has already reached out, saying she wants to help him get a spot.

“He’s a genuinely good guy so I think he deserves everything that’s coming to him,” McClure said.

We told Johnny about the @gofundme he wants to say thank you to everyone who donated or shared!! #philly #rak pic.twitter.com/jfkwamTRpp