While Cancun is known for its spectacular white sand beaches and turquoise waters, the tourist hotspot is in the grips of a brutal and growing crime wave that threatens to leave it a ghost town.

Located in the Mexican state of Quintana Roo, things are so bad in Cancun that the murder rate has doubled in the past year — with 169 killings in the first half of 2017.

Amid a thriving drug trade and widespread extortion, fear is rampant and most of the murders go unsolved. Now, the situation is so dire that its multibillion-dollar tourism industry is under threat.

British journalist Krishnan Guru-Murthy traveled to Mexico for the Special Broadcasting Service, a public broadcaster in Australia, to investigate why the murders are taking place. Guru-Murthy was stunned by what he found.

“This is one of the most beautiful views in the world and we are the only people here,” Guru-Murthy said from Cancun’s main beach.

Later on, just before sunset, he found himself in the middle of a crime scene — a man had been gunned down in the sand. Four men had come in through a luxury hotel and attacked the man, who later died in the hospital.

And this was meant to be one of the safer places in the area.

Guru-Murthy was also shocked by the lack of police presence, with many tourists unaware of the gruesome sight just feet away.

“It’s as if the police don’t want anyone to notice. There’s minimum fuss and hardly any officers here,” he said.

While it’s the third shooting on the beach in Cancun this year, tourists will struggle to find any information about the shootings online.

So why are these crimes kept so hush-hush?

“We’ve been told that local politicians here have put the press under pressure not to report violence in this area because if the tourists are scared away from here, it will be an economic disaster not only for Cancun but for Mexico.”

Even when a well-known police commander, his wife, and baby nephew were shot dead, in a separate incident during Dateline’s visit, nobody was arrested.

‘The problem is spreading’ 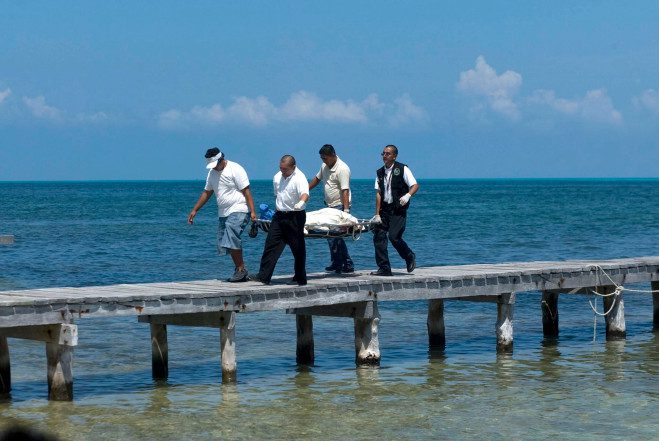 Forensic doctors carry the body of a Canadian woman along a pier in Cancun.

There are fears that Cancun is on the brink of ruin and could face a demise similar to that of Acapulco, which was once one of the world’s most glamorous locations but is now Mexico’s murder capital.

Guru-Murthy also visited Acapulco, and just five minutes after landing was notified of a nearby crime scene with four bodies — including children. 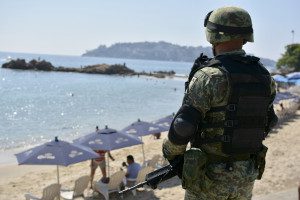 Crime is so bad in Acapulco that much of the city is a no-go zone.

Another night during his stay, he heard gunshots: A taxi driver had been murdered in the street outside.

Troops patrol the city’s streets and beaches, extortion, and murder are rife and many businesses have been forced to close. There are no foreign tourists in sight, it’s simply too dangerous here. 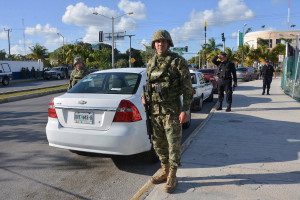 “It’s not nice to walk in the street and find someone’s head. It’s very sad to know that your friends have been executed. Medics, taxi drivers, doctors, business people … no social class is exempt.”

Extortion isn’t just happening in the city. In nearby coastal villages — where the police rarely go — there is even less protection and locals are making a stand.

Rene Ozuna, a lifelong fisherman in Barra Vieja, Acapulco, has inspired local people to rise up against the extortion gangs by forming themselves into groups of vigilantes called the Community Police.

“We have killed about six or seven people,” he said. “But only criminals, extortionists. Criminals who have cut people into pieces. In civilian life, I’m a good person.”