A taxi driver refused to take a guide dog in his vehicle because he claimed it had licked the vehicle’s gear stick.

Zaman Khan refused to take Martyn Richardson and his guide dog, Janet in his Hyundai i40 estate last May. 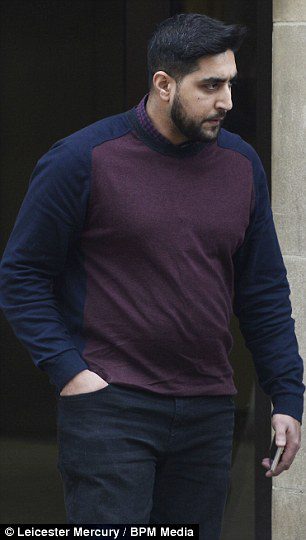 Zaman Khan, pictured was fined £400 and ordered to pay a further £400 in prosecution costs having been convicted of discriminating against Martyn Richardson

Mr. Richardson, of Thurnby, Leicestershire, called city company ADT asking them to take him, two friends and labrador Janet home after a night out at the White House, in Scraptoft.

Mr. Richardson said he got into the taxi’s front passenger seat with his guide dog sitting in the footwell.

He added: ‘I had phoned ADT and told them I had Janet and two friends and there would be three drop-off locations.

‘When I got in the taxi, the driver said he didn’t want the dog in his car and said he was scared of dogs.

‘I had only sat in the taxi for a matter of five or 10 seconds.

‘I didn’t want any fuss and thought I’d just walk home. I just wanted to get away from the situation.’

At Leicester Magistrates’ Court yesterday Khan, 29, of Brackenwaite, Rushey Mead, Leicester, pleaded not guilty to refusing to take Mr. Richardson and his guide dog, an offense under the Equalities Act.

He was found guilty of the offense and ordered to pay a £400 fine and £400 towards prosecution costs.

Khan will have to re-apply to Leicester City Council’s licensing committee before driving a taxi again.

Mr. Richardson, 48, denied a claim made by Khan that Janet had licked the gear-stick and was worried she may have been able to apply the handbrake by triggering a sensitive button on the dashboard. 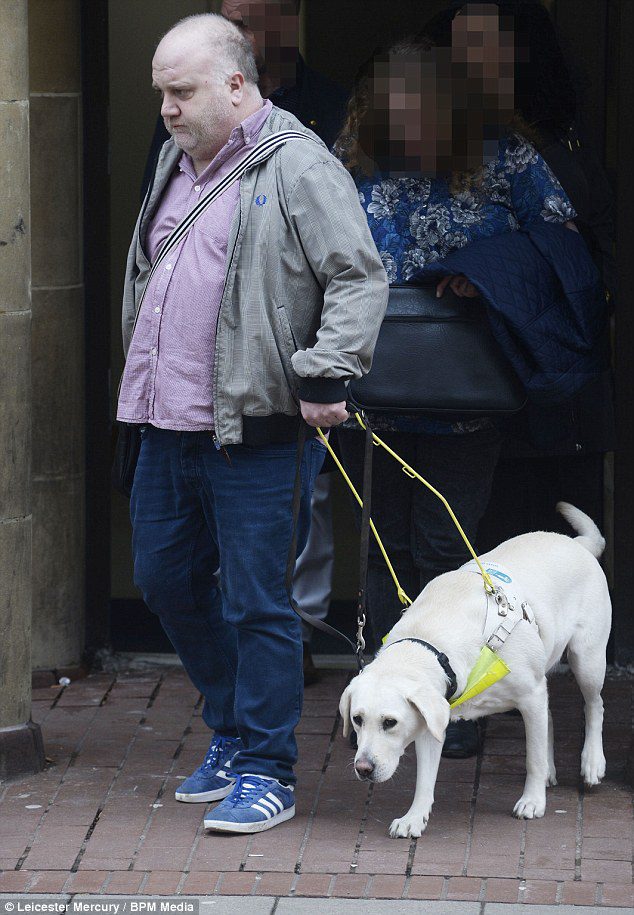 Martyn Richardson, pictured here outside Leicester Crown Court, was discriminated against on equality grounds by Mr. Khan who lost his taxi license as a result of the incident

He added: ‘There is no need for me to have control of her, she sits there as good as anything, she was sitting between my legs, facing me and never moved towards the gear-stick.

‘She is trained to avoid all distractions.’

In a call, Khan made to his head office after the incident, which was recorded by the taxi company, Khan confirms he didn’t take the guide dog.

The operator, sounding alarmed said: ‘You didn’t refuse it did you?’

The operator continued: ‘You can’t refuse a guide dog under any circumstances.’

Khan told magistrates: ‘I have no problem with dogs.

‘I knew before I was going to the job there was a guide dog.

‘We have the option to refuse or accept jobs, I accepted it, it didn’t put me off.

‘The dog came in before him, its tongue was out, it was licking the side of the dashboard and gear-stick.

‘I was worried the dog might press the button on the handbrake, applying it while I was driving.

‘I was concerned about safety and asked him if he could please sit in the rear of the car with the dog.’

John Moss, prosecuting on behalf of Leicester City Council, said Khan would have to go before the city council’s licensing committee if he wanted his license reinstated adding: ‘It will be difficult to retain that license under these circumstances.’