Crimea has announced three days of national mourning after a pupil walked into a school and launched a gun and bomb rampage that left 19 dead and 54 injured.

Vladislav Roslyakov, 18, stalked his college halls with a shotgun and let off homemade explosives before killing himself in the school library at Kerch Polytechnic College yesterday.

Twelve people are described as being in a critical condition and three are in comas. Some of the wounded have been operated on for ‘massive damage of limbs and internal organs,’ Minister of Health of the Russian Federation Veronika Skvortsova said.

The shooter, who is thought to have obtained shotguns and rifles with a hunting license for which he passed a psychological assessment, set off a homemade nail-bomb in the canteen which blew out the windows but did not kill anyone, according to reports.

Initial reports from the scene described the slaughter as a terror attack before it was reclassified as mass murder. 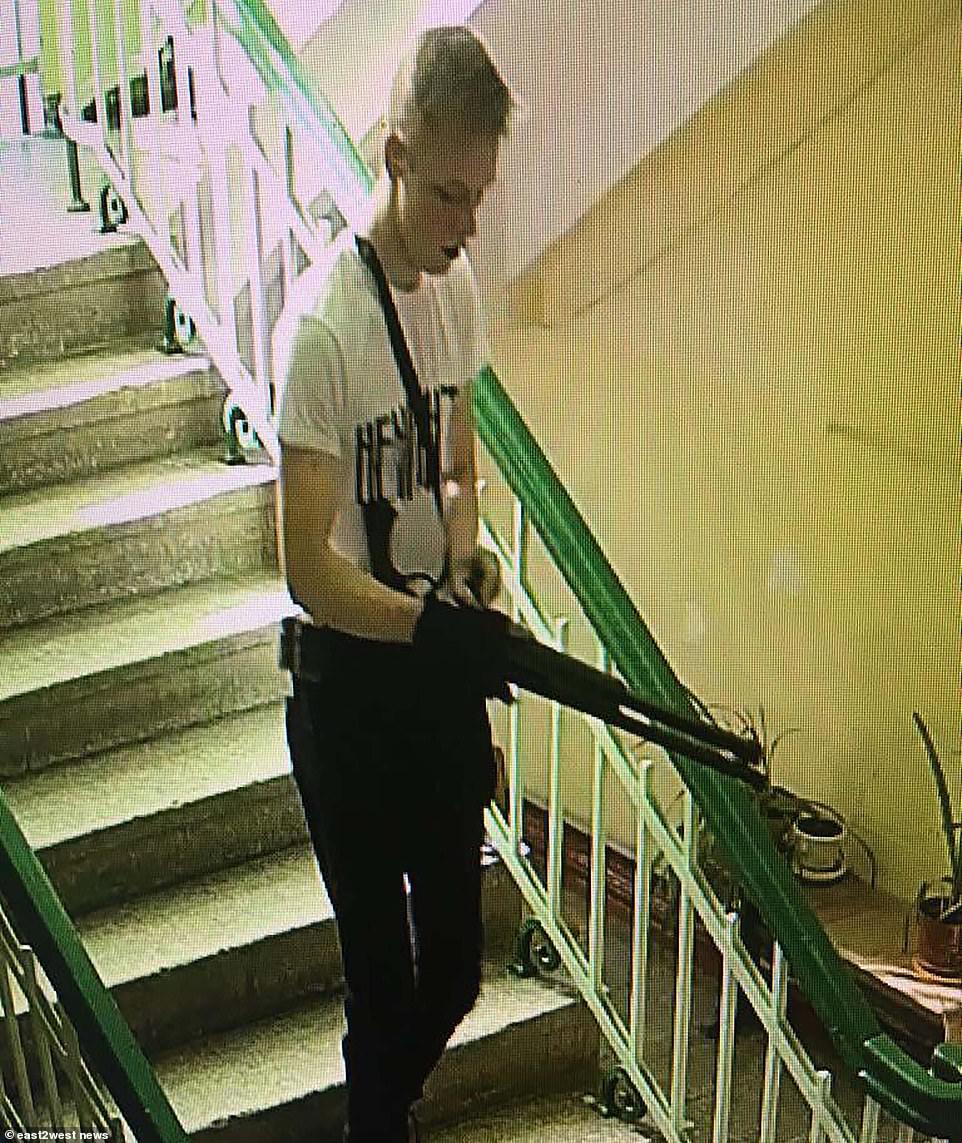 Shooter: Vladislav Roslyakov, 18, pictured on CCTV stalking his college during the attack which killed at least nineteen 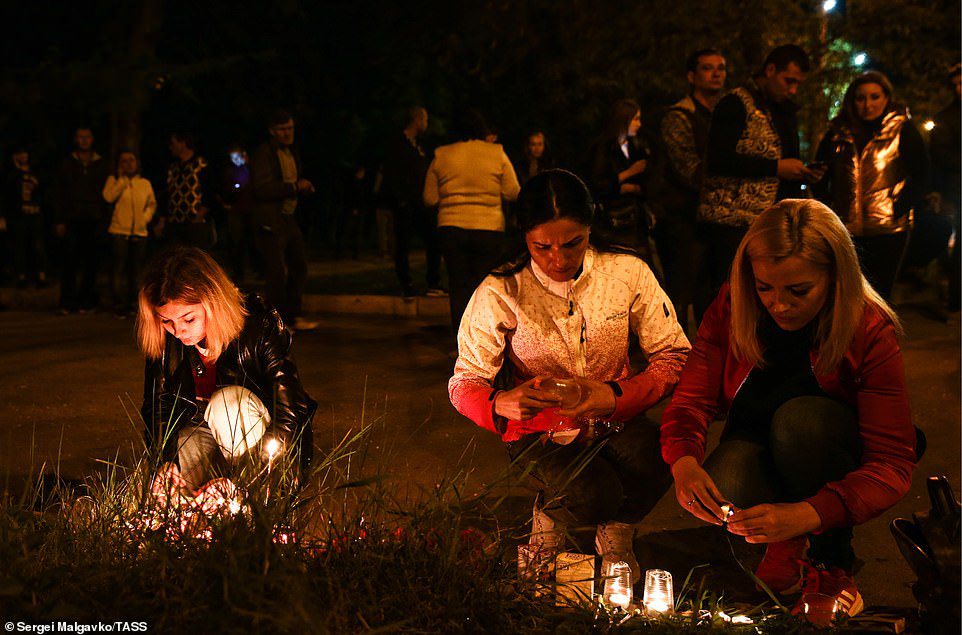 Kerch Polytechnic Vocational School in the city of Kerch, Crimea, is surrounded by mourners last night after nineteen people died 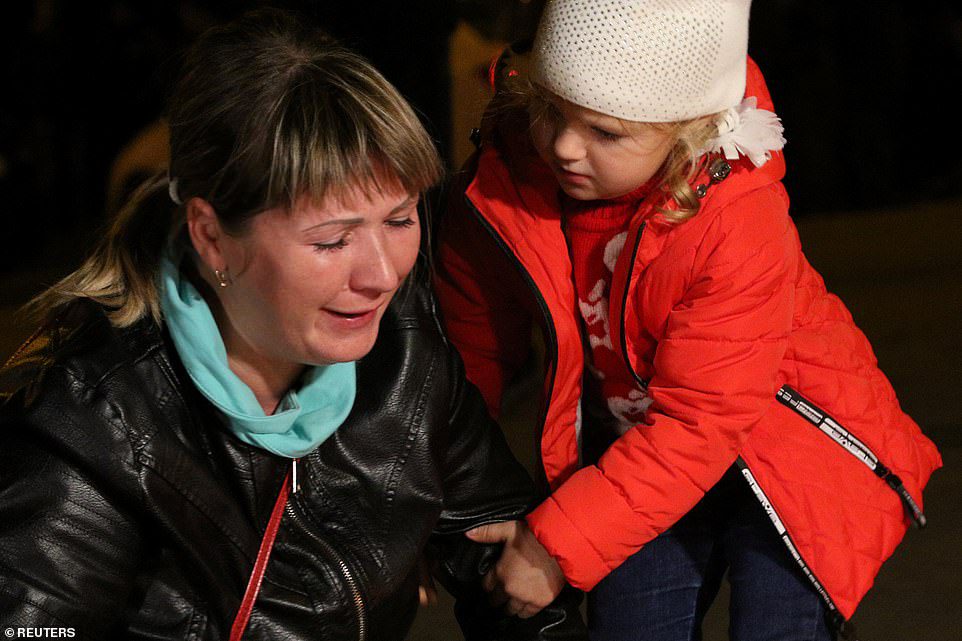 A woman was comforted by a small child at the makeshift memorial near the scene of the shooting in Kerch, Crimea 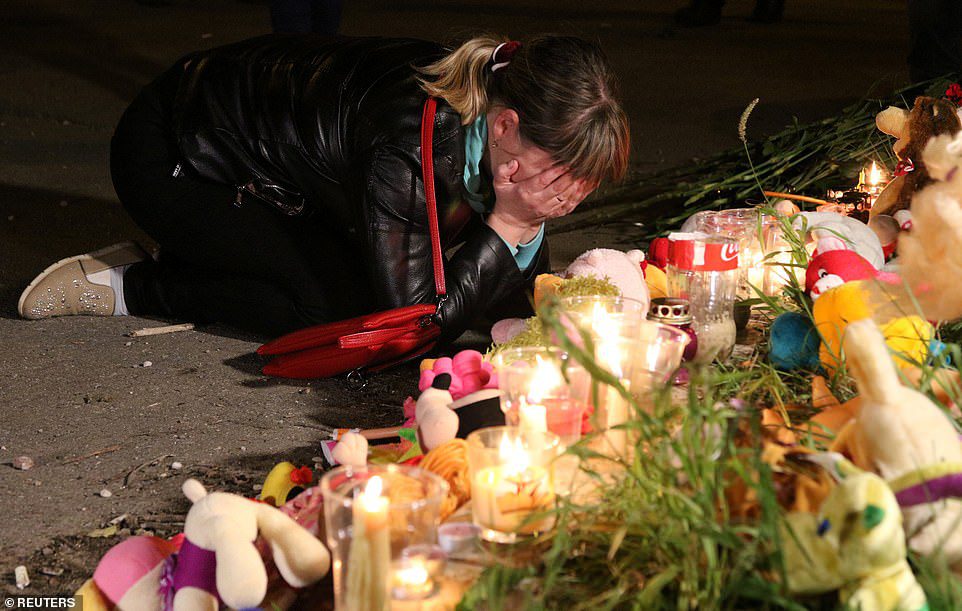 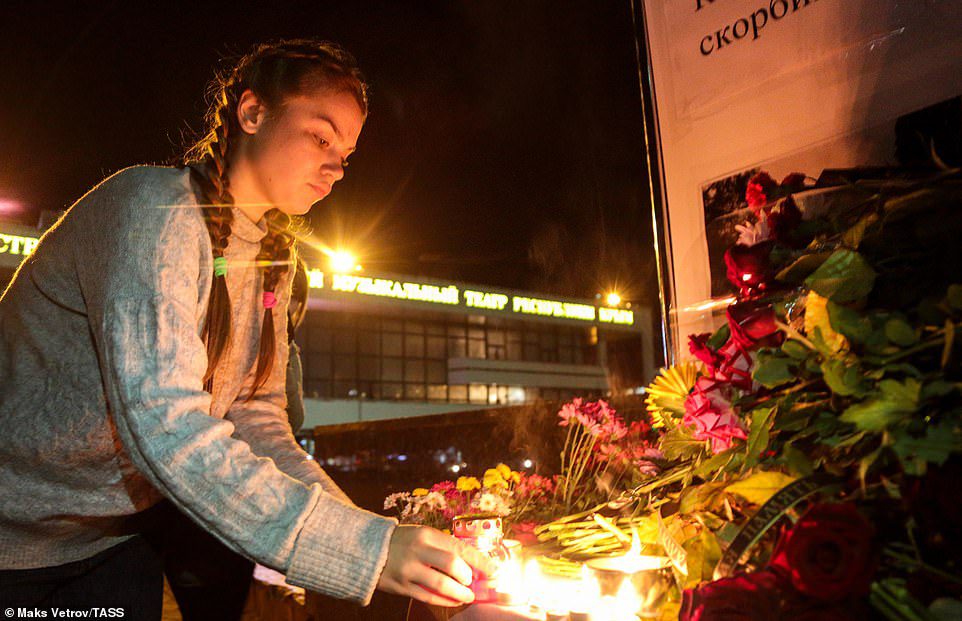 A young woman lights a candle in the city of Simferopol, Crimea, in memory of the victims of the attack which has so far claimed 18 lives – with the shooter’s death making the toll 19 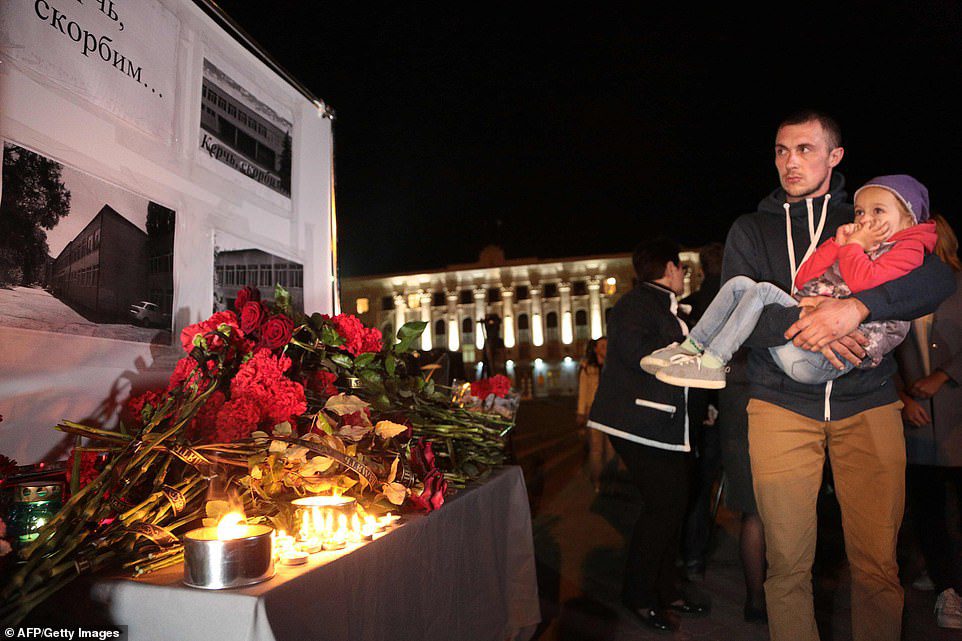 A man and his child at the memorial in downtown Simferopol, Crimea, after school children were gunned down by one of their classmates 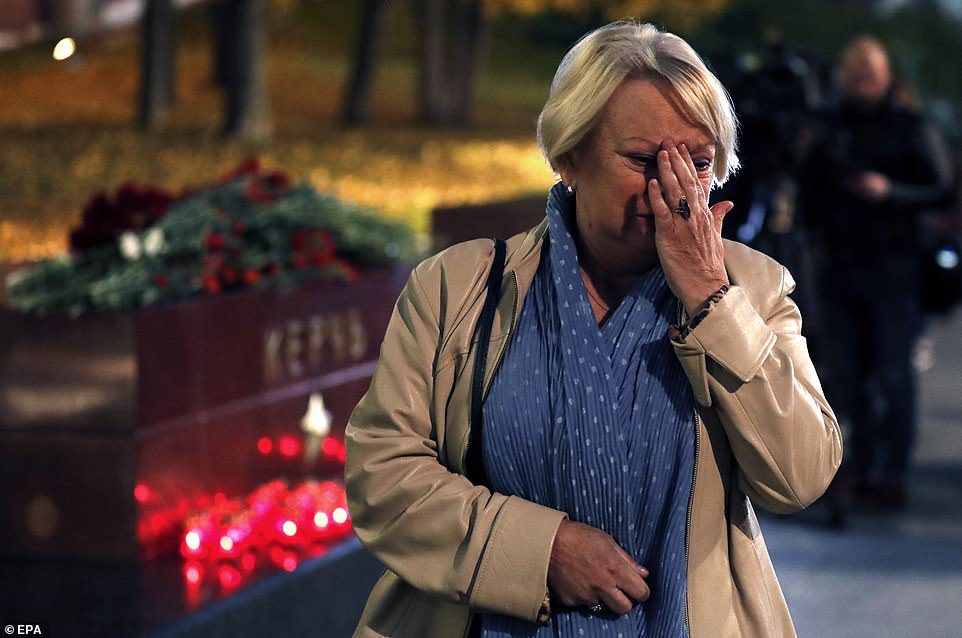 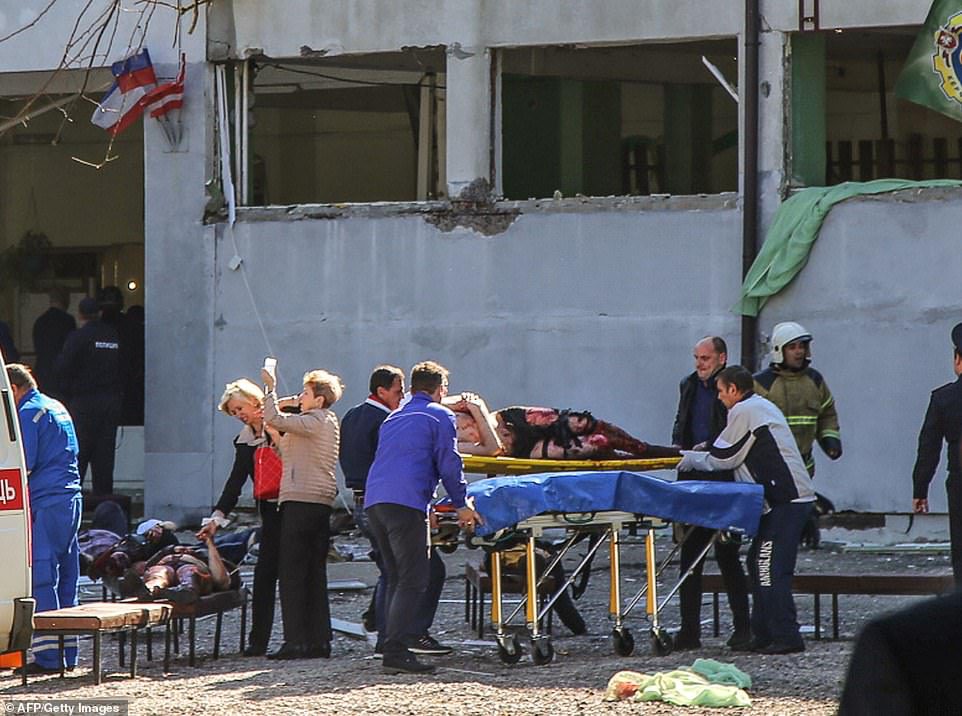 ‘A shooting took place after the explosion. The gunman had a hunting gun,’ Crimean official Igor Mikhailichenko said.

‘This is not a terrorist act. It’s a mass killing committed by one scumbag,’ Crimean Prime Minister Sergei Aksyonov said on state television.

The leader later declared three days of national mourning as the streets outside the college filled with tributes, candles, and flowers, left by distraught members of the local community.

Harrowing pictures from the scene have shown students being dragged onto bloodied stretchers with their clothes torn off from the bomb blast.

So far, only 12 of the 19 dead have been identified, because of the extent of their wounds, it has been reported.

A photograph published on Russian websites appeared to show the body of a young man lying in a pool of blood, resembling the man in the CCTV footage.

Images circulating on social media allegedly show Roslyakov wearing a similar T-shirt to Eric Harris, one of the two killers responsible for the 1999 Columbine High School massacre in the US.

Further images showed the shooter’s bag filled with what appeared to be ten homemade bombs and dozens of shotgun rounds. Russian media has claimed the teenager had 150 bullets with him. 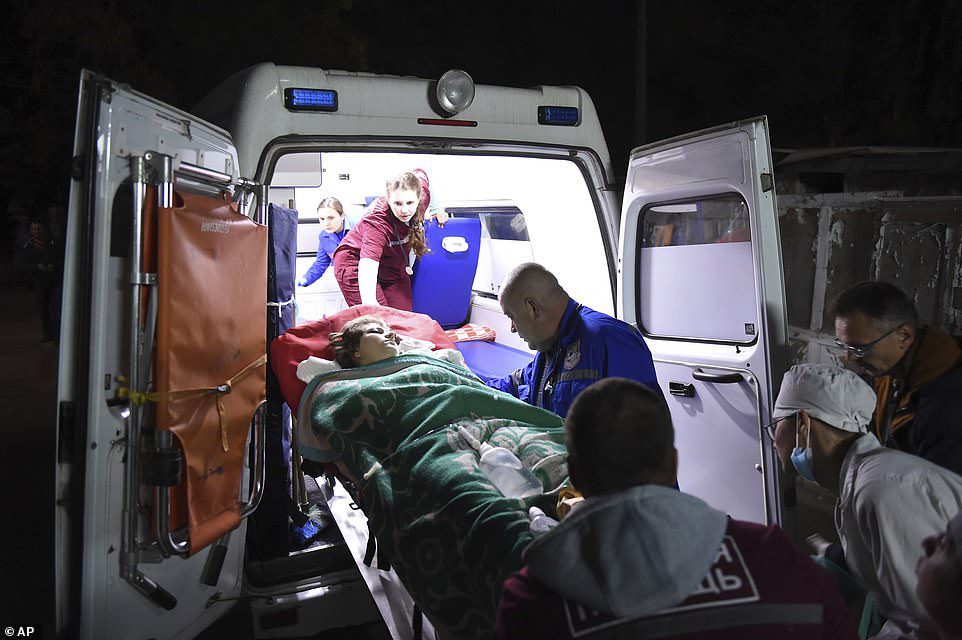 Medics load an injured a young woman onto an ambulance, in Kerch, Crimea, after the mass shooting which killed at least nineteen 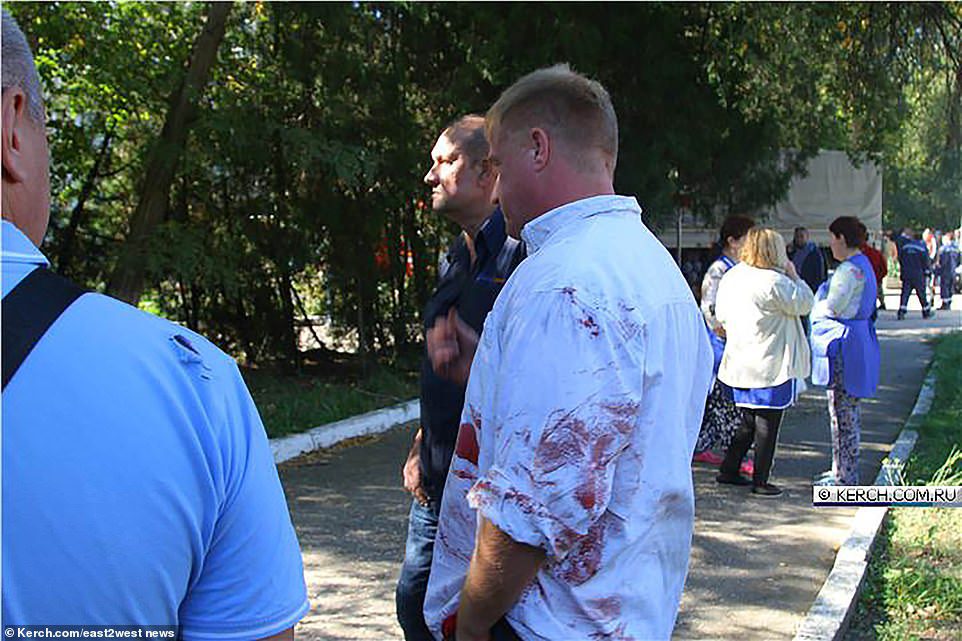 1 2 3 4Next
Prev Article Next Article