Britain donated more than £1billion to India in the years when it was lavishing a fortune on building the world’s tallest statue, figures show.

Britain donated more than £1billion to India in the years when it was lavishing a fortune on building the world’s tallest statue, figures show

The colossal bronze memorial – almost twice the height of the Statue of Liberty in New York – was immediately condemned as an expensive vanity project when it was unveiled on Wednesday.

In the 56 months it took to construct the £330million Statue of Unity, UK taxpayers gave India £1.17billion in foreign aid, according to official figures.

He was chief minister of Gujarat when the vast statue was commissioned.

The engineering project started in 2012 when British taxpayers donated almost £300million to India.

As the cash rolled in from Britain, the Indian authorities poured billions of rupees into building the 597ft tall bronze likeness of Sardar Patel, one of the heroes of India’s independence movement.

Last night Tory MP Peter Bone said: ‘To take £1.1billion in aid from us and then at the same time spend £330million on a statue is a total nonsense and it is the sort of thing that drives people mad.

‘What it proves is that we should not be giving money to India. It is up to them how they spend their money but if they can afford this statue, then it is clearly a country we should not need to be giving aid to.’

The British aid money was spent on projects ranging from improving women’s rights to funding solar panels and investment in low-carbon transport. Some £14,000 of the cash was spent in Gujarat in 2014, when the statue’s foundations were being laid, to ‘increase religious tolerance among young people’. 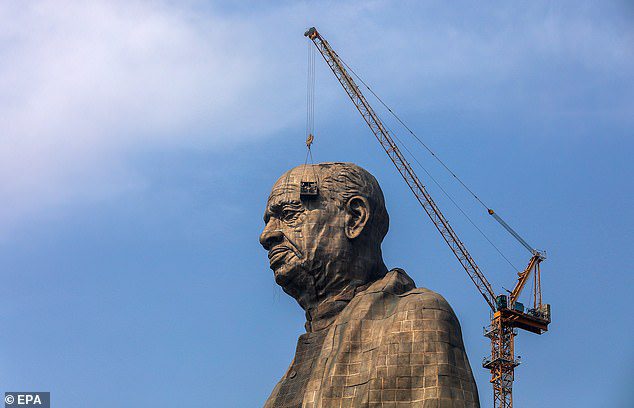 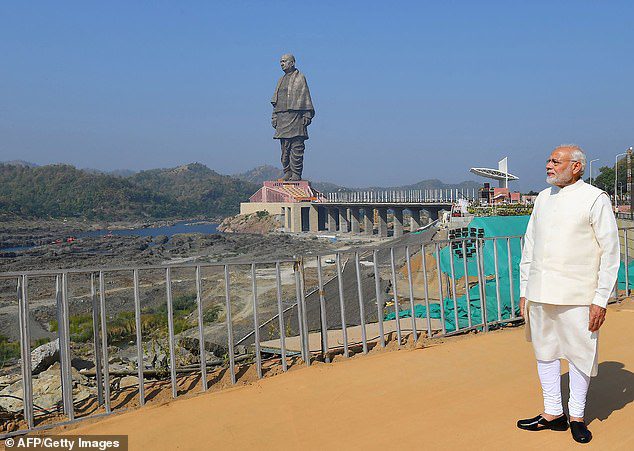 India is the world’s fastest-growing economy, has sent a mission to Mars, boasts more billionaires than the UK and itself hands out millions to needy nations. It currently gives more foreign aid than it receives despite its problems with disease and healthcare.

The British aid money did not go directly to building the statue but was spent funding projects that India could have afforded had it not been pouring cash into the 2,000-tonne memorial.

The Statue of Unity took 3,500 workers four years to construct and the project involved a land-grab affecting 72 nearby villages, forcing thousands out of their homes, according to tribal chiefs.

Indian air force jets flew over the giant figure on Wednesday and clouds of rose petals were dropped from helicopters as Mr. Modi officially opened what he described as ‘a symbol of our engineering and technical prowess’. 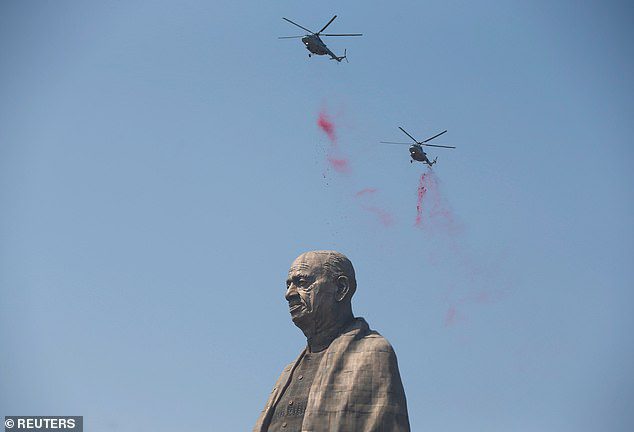 Helicopters release flowers during the inauguration of the Statue of Unity portraying Sardar Vallabhbhai Patel, one of the founding fathers of India

His address was widely seen as the unofficial launch of his re-election campaign.

In 2012, Britain’s then aid minister Andrew Mitchell announced the main aid programme to India would end after 2015. Yet last year £92.6million was spent by Whitehall officials on projects there.

UK-funded schemes included £86,616 on testing whether yoga helps people who have had heart attacks and £100,000 on bringing women scientists from India to visit Cambridge University.

The Department for International Development said it ended ‘traditional aid’ to India in 2015 but is still funding projects that boost the country’s economy and help tackle climate change.

A spokesman added: ‘The UK now provides world-leading expertise and private investment – while generating a return for the UK – to boost prosperity, create jobs and open up markets, which is firmly in our interests.’