A Spanish man has died after taking part in a bullrunning event in southwestern Spain over the Easter weekend.

Video footage shows the man, reportedly in his 50s, being gored and trampled, as the angry bull repeatedly throws him up against a wall on its horns.

The man was one of dozens of participants in the annual Toro del Aleluya [Bull of the Hallelujah], an event that has taken place every Easter Sunday in Arcos de la Frontera in Cadiz, Andalusia, since 1784. 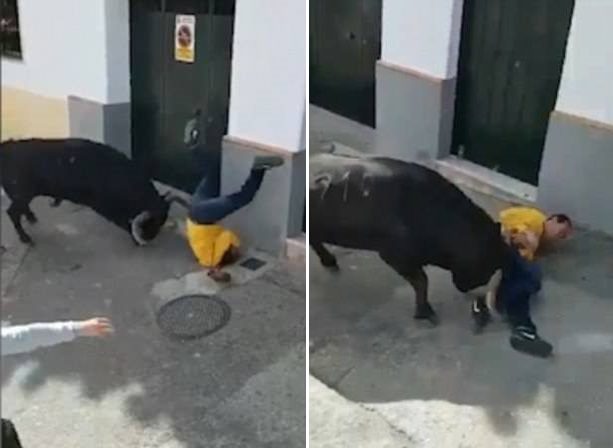 Mess with the bull, get the horns: Video footage shows the moment when a man is gored and trampled during a bull-run event in Cadiz, Andalusia, Spain

In the footage, the bull can be seen dashing down a narrow town street, chasing after a runner in a red sweatshirt.

The runner gives the bull the slip, and the animal turns its attentions to the eventual victim, a middle-aged man in a yellow top.

The man tries to outmanoeuvre the bull, but it knocks him off his feet and traps him in front of a garage door.

The bull attacks the man in the entrance several times before it runs its horn into the side of his body and drags him several feet. 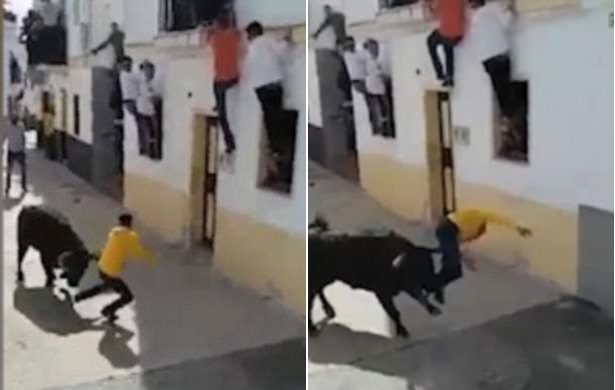 Escapees: A handful for participants can be seen holding on to windows of the surrounding houses as the man is attacked by the bull 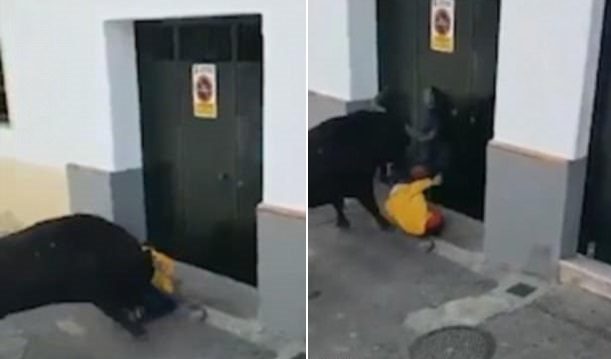 Lethal game: The angry bull repeatedly throws the man up against a wall on its horns, and he later died in hospital as a result of his injuries

Another man also suffered puncture injuries to his upper body, and was transferred to a hospital in Cadiz where he remains in a ‘safe but stable condition’.

The deceased man was about 50 years of age and a resident in the borough, local news reports.

Local Mayor Isidoro Gambin expressed his ‘support and affection’ for the friends and family of the deceased.