Junkies have been filmed openly shooting up in a San Francisco subway station amid piles of vomit and unconscious bodies.

BART managers point to a national homeless and opiate crises as the cause of the problem, saying they are simply ‘overwhelmed’ by the amount of drug use. 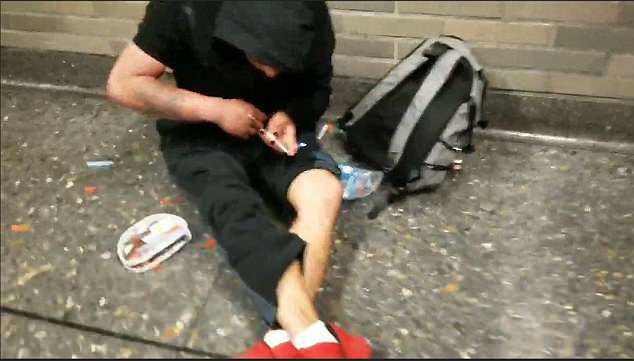 A man was seen standing in the middle of the walkway, hunched over and still like a zombie (pictured)

Posting his video on Facebook, Gafford wrote: ‘Someone needs to clean this up. Every morning, every day, it’s the same thing.

‘Junkies shooting up and making Bart the most pleasant experience ever! I walk the Civic Center Station every day and not once has this changed.

‘Does someone need to be hurt first? I’ve posted several of these videos and sent it to #BartSF #BartPoliceDepartment and nothing.’

Part of the problem, according to CBS Bay Area, is that the city’s jurisdiction ends where the subway tunnels start, meaning it is BART’s responsibility to fix the issue.

While the service says it is aware of the problem and is assigning 30 more officers to patrol the network, it simply cannot keep up.

But mayor Mark Farrell says he’s had enough and has vowed to take action.

‘I don’t care, at the end of the day, if now we have jurisdictional issues,’ he said.

‘As mayor, I want to get something done, and I want to make sure these BART stations are cleaned up.’ 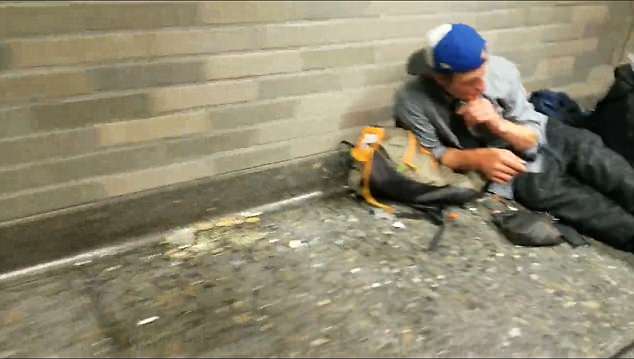 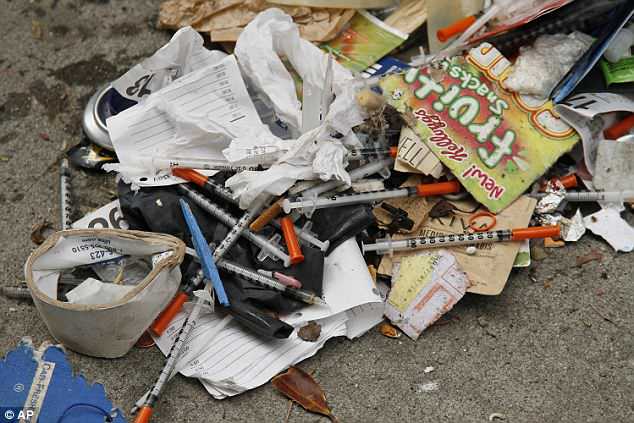 A second video posted by Gafford showed the same tunnel, crowded with people who clearly had no intention of commuting.

As he walked towards the platform, the clip showed a man smoking out of a bong crafted from a plastic bottle, and another man appearing to inject himself with a substance.

Most worryingly was a man seen standing in the middle of the walkway, hunched over and not moving, almost like a zombie.

He appeared to wobble slightly as Gafford moved around him, but nobody sitting along the walls showed any indication the sight was out of the ordinary.

San Francisco has been struggling to cope with its homeless population.

In 2017, the results of San Francisco’s bi-annual ‘homeless census’ showed the city had an estimated homeless population of 7,499.

Mayor Mark Farrell has vowed to clean up the streets and earlier this week, about 50 tent-dwellers were evicted in a sweep of problem streets.

‘Enough is enough. We have offered services time and time again and gotten many off the street, but there is a resistant population that remains, and their tents have to go,’ he said.

Police posted before and after photos of Ellis and Stevenson’s Streets showing they were completely empty after the Wednesday raids. 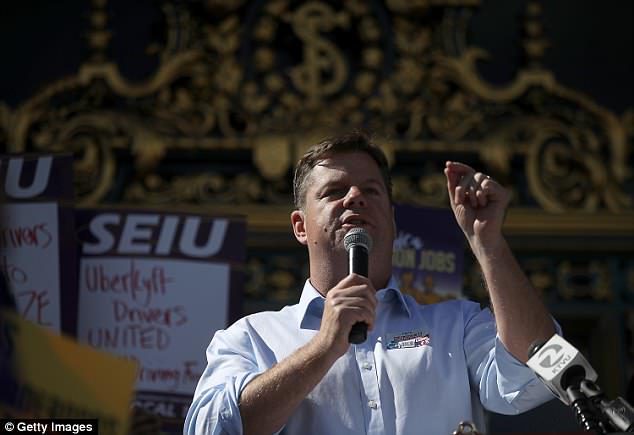 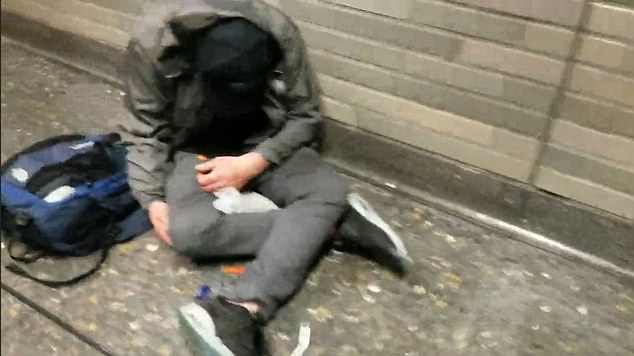 ‘I’ve never seen any other city like this – the homelessness, dirty streets, drug use on the streets, smash-and-grabs.

Mohammed Nuru, Director of the San Francisco’s Public Works Department, told NBC Bay Area he estimates $30million – nearly half of the city’s $65million street cleaning budget – is aimed at cleaning up needles and feces from sidewalks and homeless encampments.

BART Director Bevan Duffy, who is responsible for Civic Center Station, was shocked when he saw the clip and said he’s happy it was shared.

‘You know, this is a very sobering video to see. I am, frankly, glad the rider has shared this,’ he told CBS Local.

‘We’re losing some riders, and I know it’s because of these circumstances. So we’re going to work very hard to see a change.’ On Monday, Mayor Mark Farrell told residents a team who work solely to pick up needles off the streets will now respond to resident complaints and complete cleanups in ‘hot spots’ seven days a week BART Police Lieutenant Gil Lopez said they were in desperate need of more staff to help address the issue.

Mr. Lopez said two officers were assigned to cover two stations, which saw them dashing back and forth from fiasco to fiasco.

He conceded problems with homelessness and drug use had increased significantly lately.

San Francisco’s issue with homelessness is the result of many factors, but income disparity plays a major role.

In the metro area, the average income of the top one percent of households was $3.6 million in 2013, a study from the California Budget and Policy Centre showed.

That amount was 44 times the average income of the bottom 99 percent -who earned on average $81,094.

The study showed San Francisco had the highest rate of income disparity by a wide margin – the city was trailed by Los Angeles, where the top one percent was earning 32.8 times more than the 99 percent.

High incomes in the Silicon Valley and tax breaks for tech startups throughout the city mean some of the world’s biggest technology companies call San Francisco home.

In February, Apartment List revealed San Francisco had the highest rent in the USA, with a one bedroom apartment costing on average $2,440 a month. 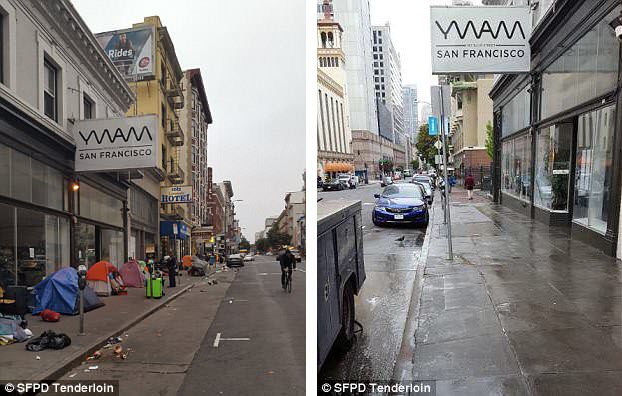 San Francisco’s Tenderloin was bustling with tents, sleeping bags, the meager possessions of the city’s homeless on Tuesday – now it is empty 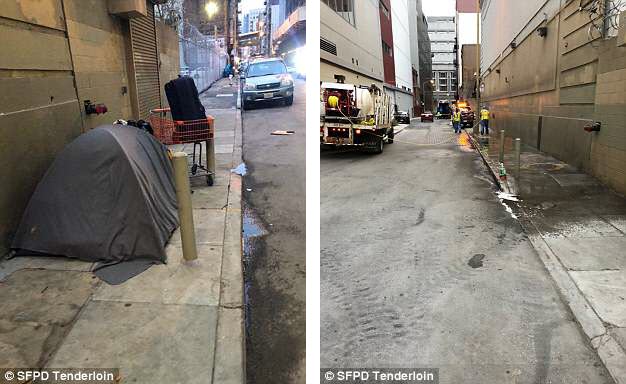 On Wednesday, Ellis and Stevenson Streets, usually covered in tents and lined with the city’s homeless, were cleared by local police.

But while the city believed they were doing something good for residents, many were concerned about the locals and where they would go.

Twitter user Jennifer Cedar-Kraft wrote: ‘Is this supposed to make me pleased? Where did all the humans and their meger belongings go?

‘People do camp out on my block. It’s not great, but I don’t call the cops on them or want them to get hosed down. This is not the solution unless they have a better place to go.’

Damon Oliver said: ‘So you made helpless and homeless citizens go somewhere else??? But where?? But did you actually help those in need??’

And Cathy Reisenwitz added: ‘Where are these people now?’

The answer appeared to be moving a few blocks away to continue the cycle until the next area was cleaned out.

‘This is just what happens around here. They move us. They clean. We just set up somewhere new. Then it happens all over again,’ Fernando Veloso, 50, told the SF Chronicle as he packed up his tent.