A heartbreaking photo of an elderly homeless man huddled outside a Tesco in a bid to shelter from the freezing temperatures brought on by Storm Emma has spurred an entire community to action.

The picture of the frail man wrapped up in blankets next to a trolley full of his belongings led to people in Erdington, Birmingham, helping him get off the streets.

Sitting outside a Tesco, the unnamed man, who is believed to be in his 70s, was spotted by a passer-by who shared the tear-jerking scene on Facebook. 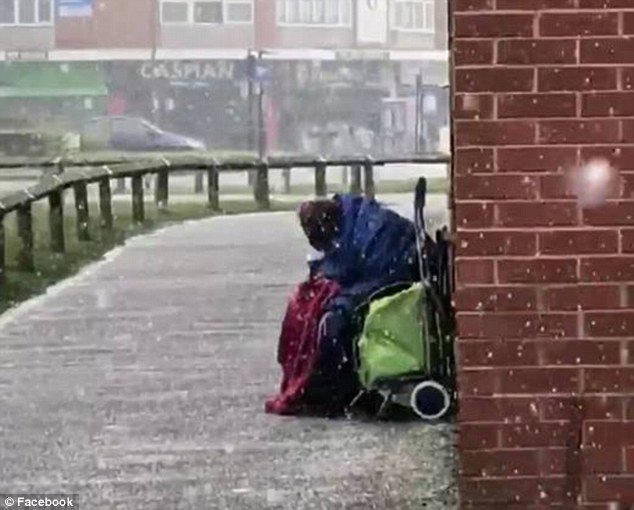 The photo of the frail man (pictured) wrapped up in blankets next to a trolley full of his belongings led to people in Erdington, Birmingham, helping him get off the streets

Jo Bialan posted the image with the caption: ‘Never in a million years when giving out clothes did I think I would come across this – OMG.

‘He’s been there all night and I’ve given him stuff and hot coffee to keep his hands warm. Surprisingly said, for now, he is OK.

‘Please share this – Tesco’s Erdington High Street, have gone to work crying, phone calls to make, this guy is in his 70s.

After seeing the heartbreaking image, shoppers and residents contacted the city council, the local MP, Jack Dromey, and various charities in order to help the man off the street, reports the Birmingham Mail.

Sitting outside a Tesco, the unnamed man, who is believed to be in his 70s, was spotted by a passer-by who shared the tear-jerking scene on Facebook (caption pictured) 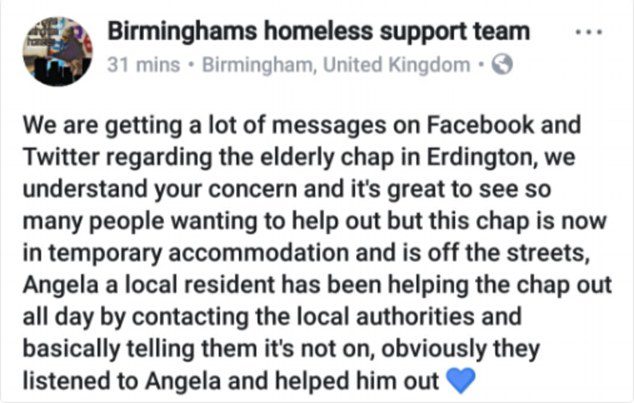 Birmingham Homeless Support Team (BHST) praised the community’s persistence and said it was this determination that led to accommodation being found for the homeless man.

BHST tweeted on Wednesday that the elderly man had a roof over his head, writing: ‘We are getting a lot of messages on Facebook and Twitter regarding the elderly chap in Erdington.

‘We understand your concern and it’s great to see so many people wanting to help out. But this chap is now in temporary accommodation and is off the streets.

‘Angela, a local resident, has been helping the chap out all day by contacting the local authorities and basically telling them it’s not on. Obviously, they listened to Angela and helped him out.’