Home
Shocking
Breaking News: Trump Says We Will Fire On Caravan If They Throw Rocks
Prev Article Next Article

President Donald Trump issued a dire warning to would-be immigrants making their way toward the U.S., warning that thousands of U.S. troops being sent to the border would return fire if caravan members throw rocks at them.

Trump has already ordered thousands of troops to the southern border and was asked after delivering a fiery speech at the White House whether he envisioned them firing on the people making there way approaching the border on foot.

‘I hope not. I hope not. It’s the military. I hope there won’t be that. But I will tell you this: Anybody throwing stones, rocks like they did to Mexico and the Mexican military, Mexican police – where they badly hurt police and soldiers of Mexico – we will consider that a firearm,’ Trump warned. 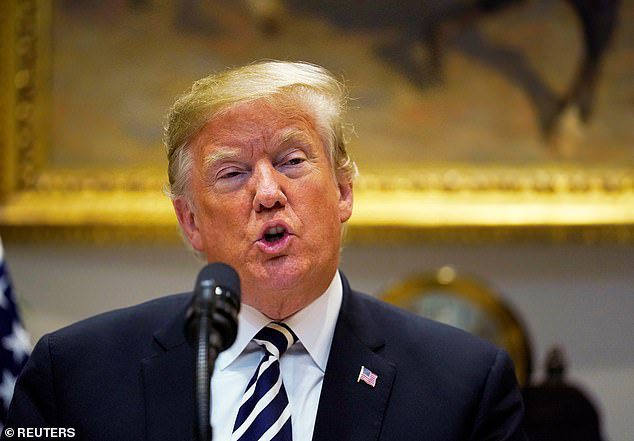 ‘Anybody throwing stones, rocks … we will consider that a firearm,’ President Donald Trump warned at the White House Thursday 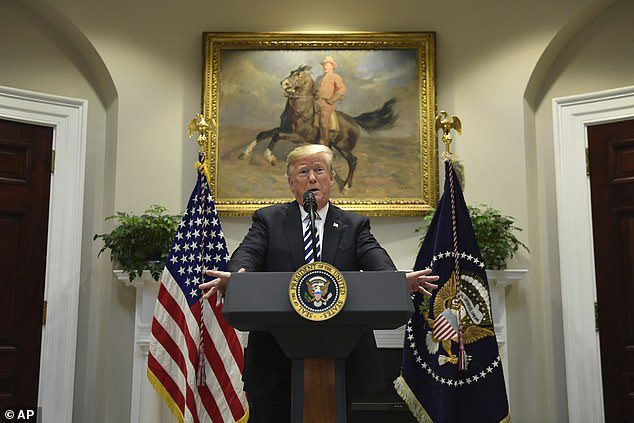 Trump spoke from the Roosevelt Room of the White House 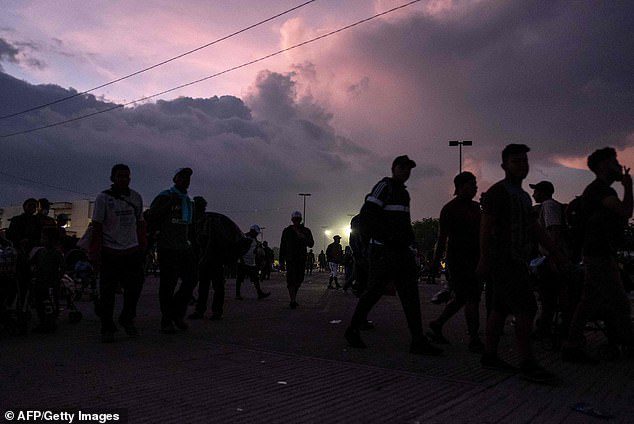 A 4,000-strong caravan set out before dawn from Juchitan to Matias Romero, at La Ventosa, Oaxaca State, Mexico, after being denied buses

‘Because there’s not much difference. When you get hit in the face with a rock. Which, as you know, it was very violent a few days ago. Very, very violent,’ he added.

The president evoked a potentially violent confrontation at the border and referenced clashes that have occurred in Mexico with Mexican authorities.

‘This is an invasion and nobody’s really questioning that,’ the president added.

Trump issued the threat after he delivered a long rant about illegal immigration from the White House on Thursday, blasting a clogged court system, called out people who jump the line of legal immigrants, and blasted what he called ‘endemic abuse of the asylum system.’

The White House had touted the policy change, but the president was unable to deliver any new executive order, legislation, or other formal action.

Asked at one point about current obligations via U.S. law and treaties to consider asylum claims, the president curtly responded: ‘They’re going to court, as crazy as it sounds.’

The president once again said the U.S. would build tent cities to manage the problem of would-be asylum seekers, and said: ‘We’ll be holding the family and the children together’ in the tents.

‘We have other facilities also. But what’s happened is, we are holding so many facilities, so many people that our facilities are overrun. They’re being overrun. And we are putting up temporary facilities. Eventually, people will not be coming here anymore when they realize they cannot get through,’ Trump said. 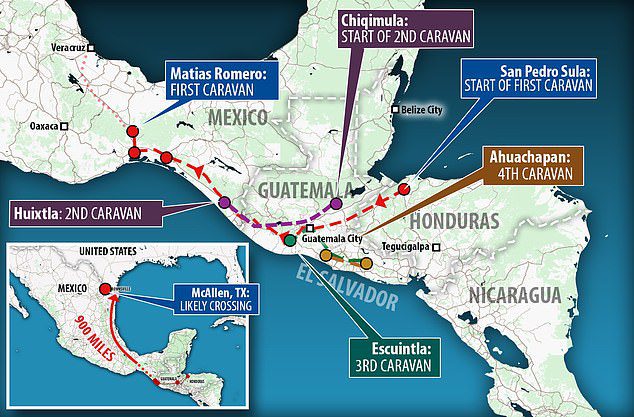 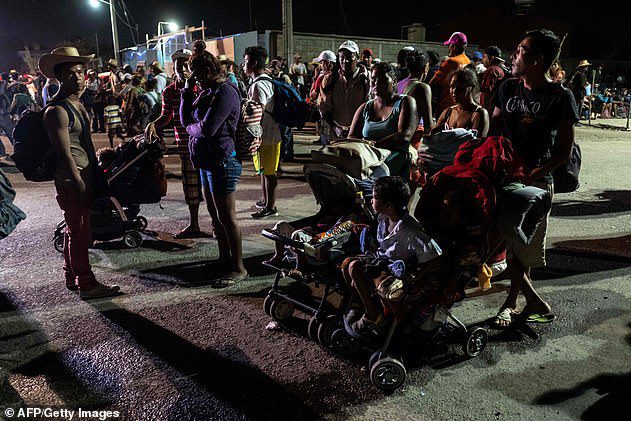 The migrants were hoping to compel Mexican authorities to provide transportation for them to Mexico City, but it did not happen, prompting them to continue walking

Asked if the children will be held in tent cities, Trump responded: ‘We will be holding the family and the children together. Remember this: President Obama separated children from families. And all I did was take the same law, and then I softened the law. But by softening the law, many people come up that would not have come up if there was separation.’

Asked what would happen to the children, Trump gave a lengthy answer where he mentioned President Barack Obama three times.

‘We’re working on a system where they stay together. But I will say that by doing that, tremendous numbers – you know, under the Obama plan you could separate children.

‘They never did anything about that. Nobody talks about that. But under President Obama, they separated children from the parents. We actually put it so that didn’t happen. But what happens when you do is you get tremendous numbers of people coming. It’s almost like an incentive to – when they hear they’re not going to be separated, they come many, many times over.

‘But President Obama separated the children from the parents and nobody complained. When we continued the exact same law, this country went crazy. So we are going to continue and try to continue what we’re doing. But it is a tremendous incentive for people to try. But it’s going to be very, very hard for people to come to our country.’

With the election just days away, the president complained about a ‘catch and release’ immigration system he said failed because people are choosing not to show up for their court appearances.

‘They never show up at the trials. They never come back, they’re never seen again,’ the president vented.

The president vowed to ‘take every lawful action at my disposal to address this crisis,’ and emphasized asylum in particular. But he was vague on providing any details.

He said he was ‘finalizing a plan to end the rampant abuse of our asylum system.’

He complained about drugs, crime, and a caravan of immigrants making its way toward the border.

‘We’re not releasing them into our country any longer. They’ll wait long periods of time.’

In one of many tangents, he vented: ‘Fentanyl is killing our youth.’

The president said members of the caravan would not be getting asylum.

‘We will be doing an executive order sometime next week … it’ll be quite comprehensive.’ 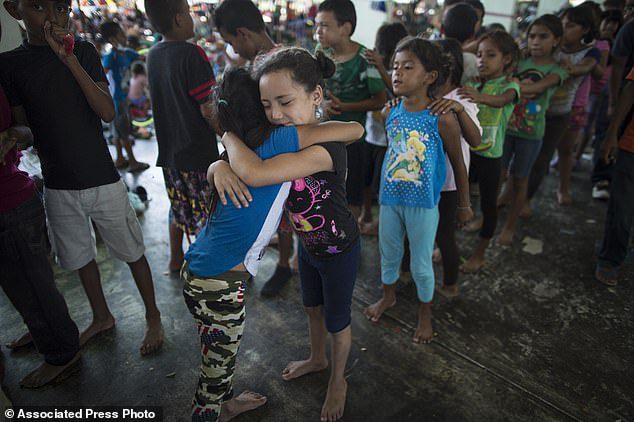 Honduran girls hug while waiting in line for a chance to play on the playground at a camp set up by a caravan of thousands of Central American migrants in Juchitan, Mexico, Wednesday

‘These migrants are not legitimate asylum seekers. They’re not looking for protection because if they were, they’d be able to get it from Mexico.’

He called human traffickers ‘The lowest scum on earth.’

Trump once again went after the people comprising the caravan.

‘These are tough people in many cases. A lot of young men, strong men. And a lot of men that maybe we don’t want in our country,’ Trump said.

But he also acknowledged that many of those drawn to the U.S. was coming to reap the benefits of the U.S. economy.

‘We right now have the hottest economy anywhere in the world,’ Trump said. ‘In some cases, they want to take advantage of that,’ he allowed.

In give-and-take with reporters, Trump rejected the suggestion he was just making a political move for the elections. Early voting has already begun and Election Day is Tuesday.

‘There’s nothing political about a caravan of thousands of people, and now others forming, pouring up into our country. We have no idea who they are,’ Trump said.

In one of many odd features of his remarks, Trump appeared to thank the crowd when he first entered the Roosevelt Room, even though only reporters and photographers and a few aides were there, and no one had applauded him, which would have been out of the ordinary if it did happen.

‘Thank you very much, everyone. Appreciate it,’ Trump said to the silent room.

The White House in advance touted a coming directive denying asylum to migrants who try to enter the country illegally this afternoon as he takes action to thwart migrant caravans heading toward the United States’ southern border.

Trump also said this week that he wants to get rid of birthright citizenship to discourage migrants from coming to America to giving birth to children who will automatically become United States citizens.

‘Birthright citizenship’ is derived from the 14th Amendment. Trump says that the wording of the amendment leaves room for him to exercise his authority as the nation’s executive to keep children born to illegal immigrants for immediately becoming citizens.

The Immigration and Nationality Act similarly requires the federal government to follow asylum laws. However, Trump is expected to push the boundaries of his authority on immigration anyway, just like he did with extreme vetting.

It took him three tries, but the proposal was eventually held up in a watered-down form by the Supreme Court. Trump said he barred legal residents of countries with ties to terror from temporarily coming to America, because their entry was a national security threat, not because they were from majority-Muslim nations.

This week, as he plotted executive actions that would make massive changes to the immigration system days before the mid-term elections, he pointed to Barack Obama’s 2012 decree that illegal immigrants who were brought to the country as children could stat in the U.S. indefinitely through the Deferred Action for Childhood Arrivals program.

Trump made his most audacious attempt yet on Wednesday night to turn a sea of approaching Central American migrants into a midterm voting issue, tweeting a video linking them to a death row inmate who killed two Sacramento, California police officers after being deported twice from the United States and returning each time.

Convicted cop killer Luis Bracamontes famously grinned and swore his way through his trial and sentencing this year, vowing to escape and kill more police officers.

He screamed ‘F*** you, judge!’ during a late January hearing and was banned from attending the rest of his trial in person, watching the remaining days on video monitors.

Trump’s 55.5 million Twitter followers saw his own take on the case, a recap of the trial’s most shocking moments titled: ‘Illegal immigrant Luis Bracamontes killed our people!’