Outraged social media users are encouraging people to boycott Starbucks because of a ‘racist incident’ where one store in Philadelphia called the cops on two black men.

The hashtag #BoycottStarbucks was trending on Twitter Saturday after a viral video was posted showing six officers arresting two black men who were waiting for their friend in the downtown shop on Thursday.

One user posted a photo of the milk in her coffee and said: ‘At Starbucks, you must be THIS white to sit at their tables’.

Other users called the altercation ‘racism at its ugliest level’ in America.

But Philadelphia’s Police Commissioner Richard Ross said his officers ‘did absolutely nothing wrong’ and asked the men to leave three times before they were arrested. 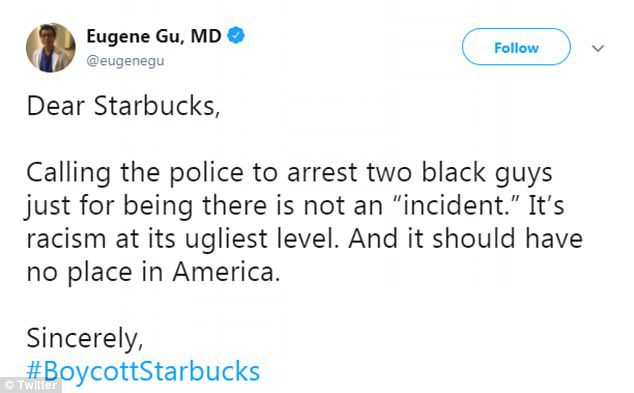 Social media users are calling for a boycott of Starbucks after a store in Philadelphia, Pennsylvania, called the cops on two black men who were waiting for their friend 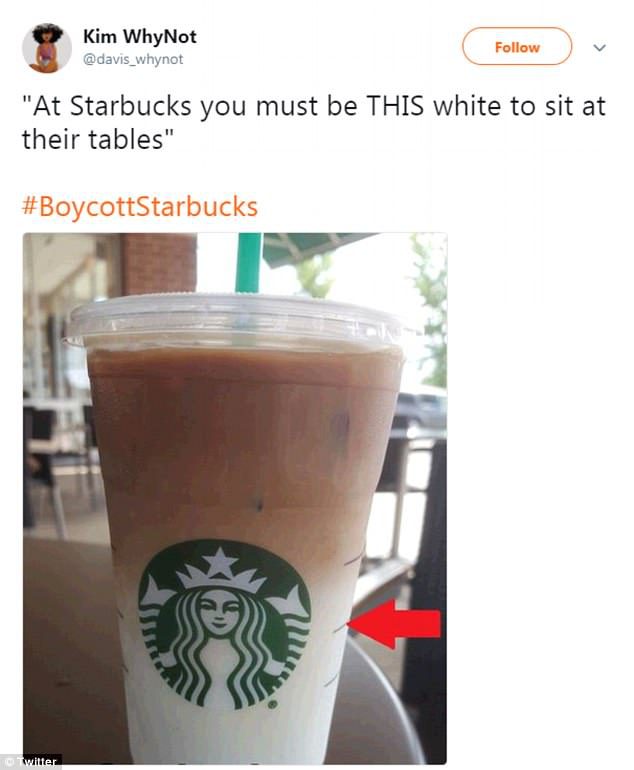 One user claimed that people have to be ‘this white’ in order to sit at a table in Starbucks. The men were reportedly asked to leave but refused

Commissioner Richard Ross released his statement on the incident on Facebook live.

‘At about 4:40 police received a 911 call for a disturbance and trespass. When the police arrived they were met by Starbucks employees who said that two males were trespassing and had refused to leave the establishment,’ he said.

‘According to employees they had seen the two males come in, they sat down, and after being seated they decided they needed to use the restroom.

Starbucks said that according to the company policy they do not allow non-paying members or nonpaying people to come in and use the restroom. And so they then asked these two males to leave. These two males refused to leave and the police were called,’ he added.

He revealed that the officers on the scene called the Starbucks supervisor first to ‘avoid the situation from getting out of hand’.

The men refused to budge.

He stressed that the males were not harmed in the arrest and were taken to the police district. 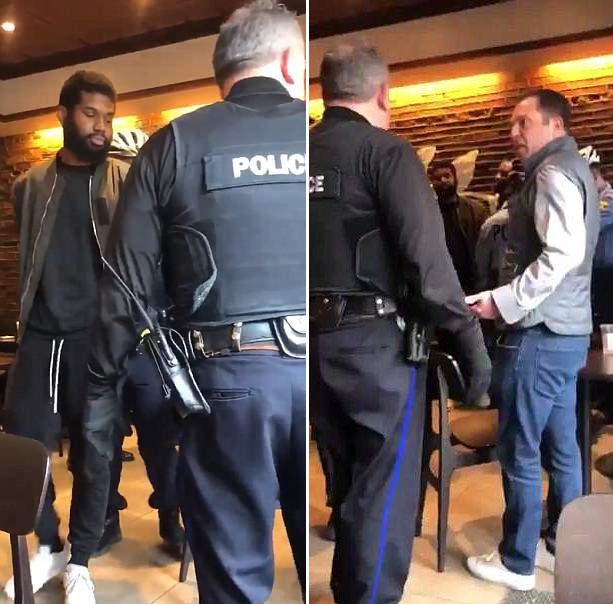 Six police officers arrived at the Starbucks and arrested the two men. The incident was recorded by another person in the coffee shop. The video has since been viewed more than 3.2million times on social media 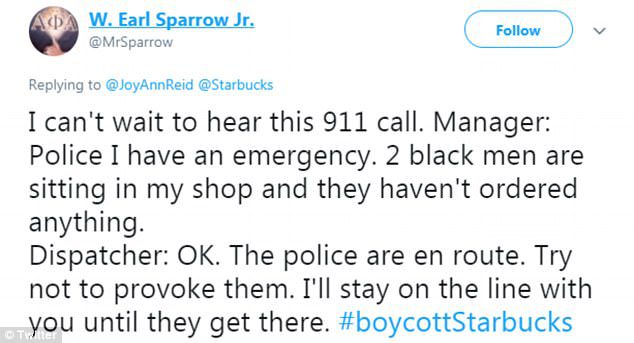 The two men were placed in handcuffs and escorted out of the video, which is shown in a viral video that has since garnered more than 3.2million views.

At first, Starbucks released a statement on Friday saying: ‘We’re aware of the incident on Thursday in a Philadelphia store with 2 guests and law enforcement, resulting in their removal. We’re reviewing the incident with our partners, law enforcement, and customers to determine what took place and led to this unfortunate result.’

They issued a second statement Saturday.

‘We apologize to the two individuals and our customers and are disappointed this led to an arrest. We take these matters seriously and clearly have more work to do when it comes to how we handle incidents in our stores. We are reviewing our policies and will continue to engage with the community and the police department to try to ensure these types of situations never happen in any of our stores,’ the statement said. 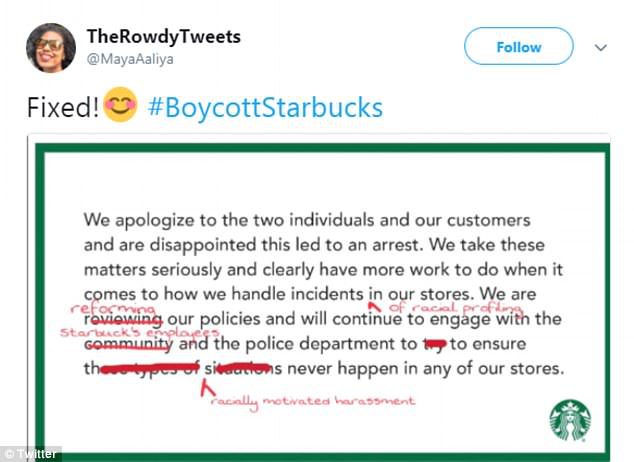 Starbucks released a statement Saturday where it apologized to the two men. But one user thought the apology wasn’t sufficient and decided to edit it themselves 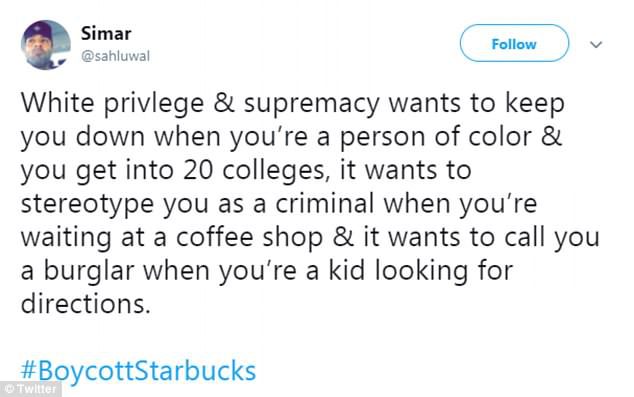 Another user compared this incident to others that have occurred recently across the US. He mentioned the people who were mad about the teen who got into 20 colleges and the ex-firefighter who shot at a black teenager on his doorstep

But one Twitter user edited the statement to include that the moment was ‘racial profiling’ and ‘racially motivated harassment’.

Starbucks’ CEO Kevin Johnson expressed his ‘deepest apologies’ about the incident and plans to fly to Philadelphia to help correct the situation.

‘I hope to meet personally with the two men who were arrested to offer a face-to-face apology,’ Johnson said Saturday.

At the end of Ross’ statement, he acknowledged the racial tension that is surrounding the incident.

‘I will say that as an African American male I am very aware of implicit bias. We are committed to fair and unbiased policing and anything less than that will not be tolerated in this department,’ he said.

The two black men who were arrested in the coffee shop have since been released and remain unidentified.

A spokesman for the district attorney’s office said the men were released ‘because of lack of evidence’ that a crime had been committed, the Associated Press reported.