A gun-obsessed church pastor has held a blessing ceremony for couples who turned up with AR-15 rifles and bullet crowns.

The controversial World Peace and Unification Sanctuary church, in Pennsylvania, held the event for its gun-loving congregation just two weeks after 17 people were killed when a gunman opened fire with an AR-15 at a Florida high school.

On Wednesday, dozens of couples attended the church, wearing golden crowns – many made of bullets – and carrying their rifles. 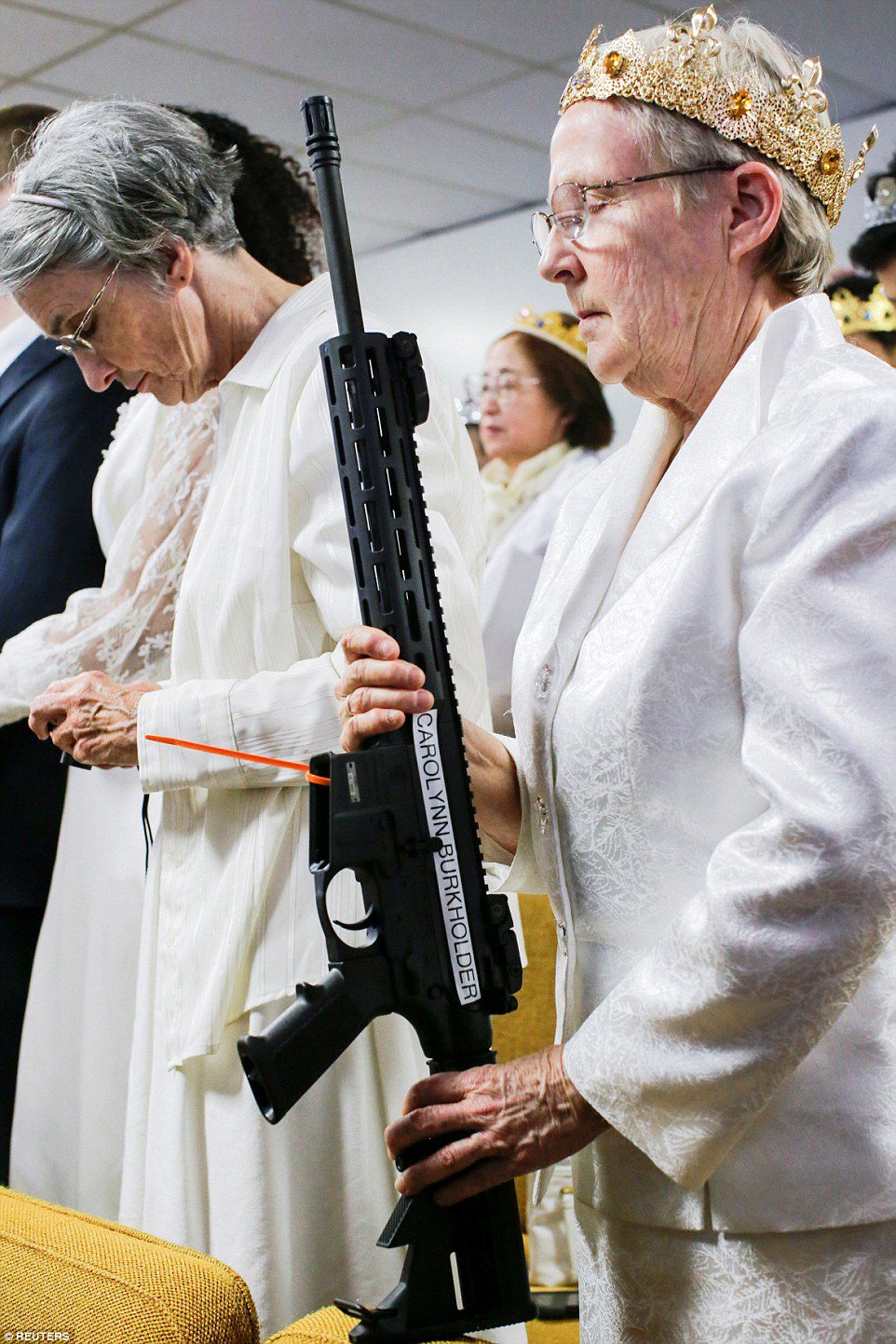 An elderly woman holds her AR-15-style rifle, which has been zip-tied, as people attend a blessing ceremony 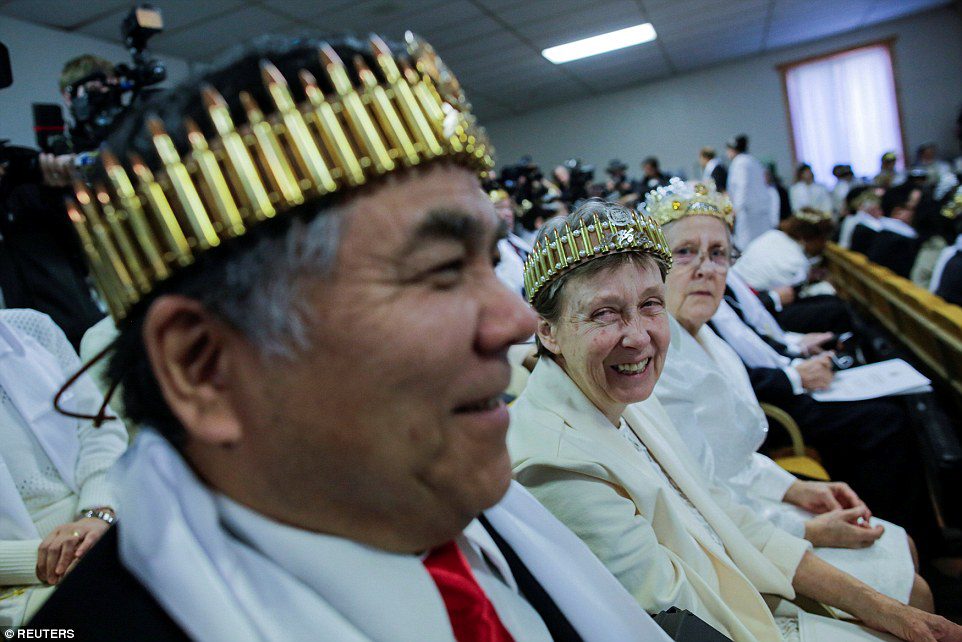 A couple wearing bullet crowns sit with their AR-15-style rifles in their cases, as people attend a blessing ceremony at the Sanctuary Church in Newfoundland, Pennsylvania 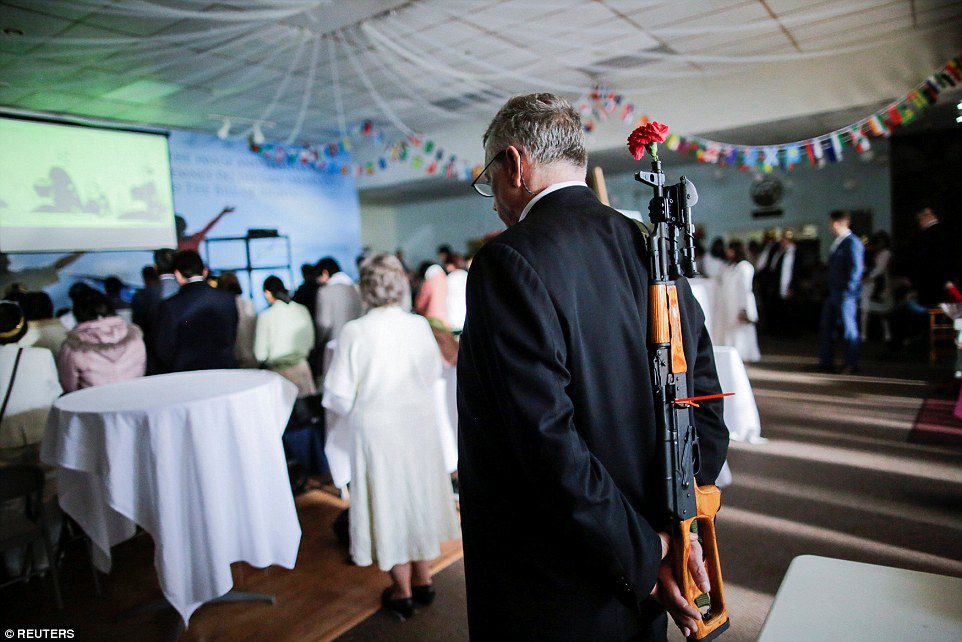 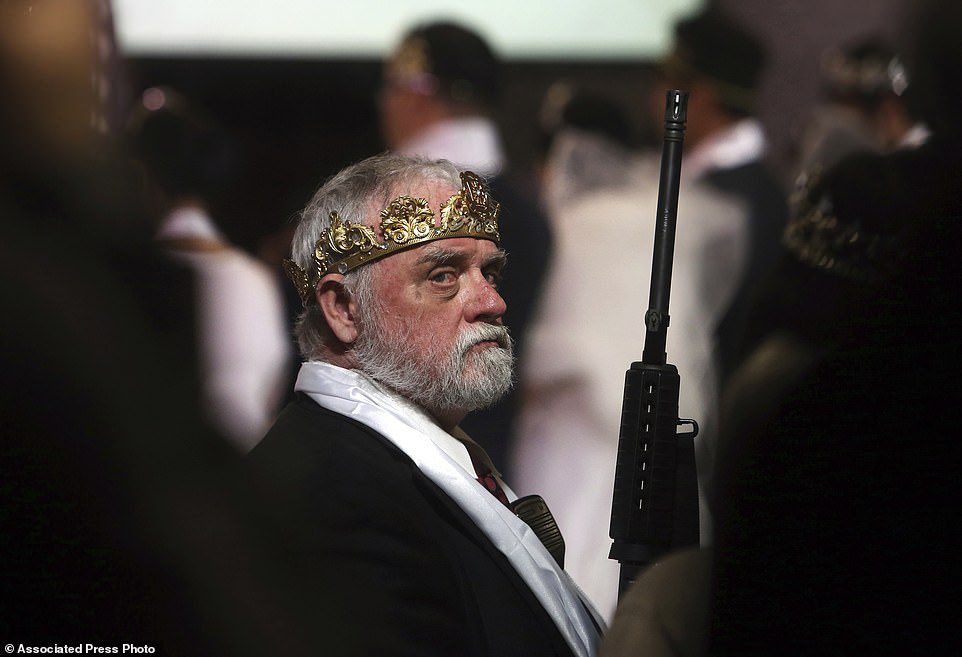 A man wears a crown and holds an unloaded weapon at the World Peace and Unification Sanctuary, Wednesday 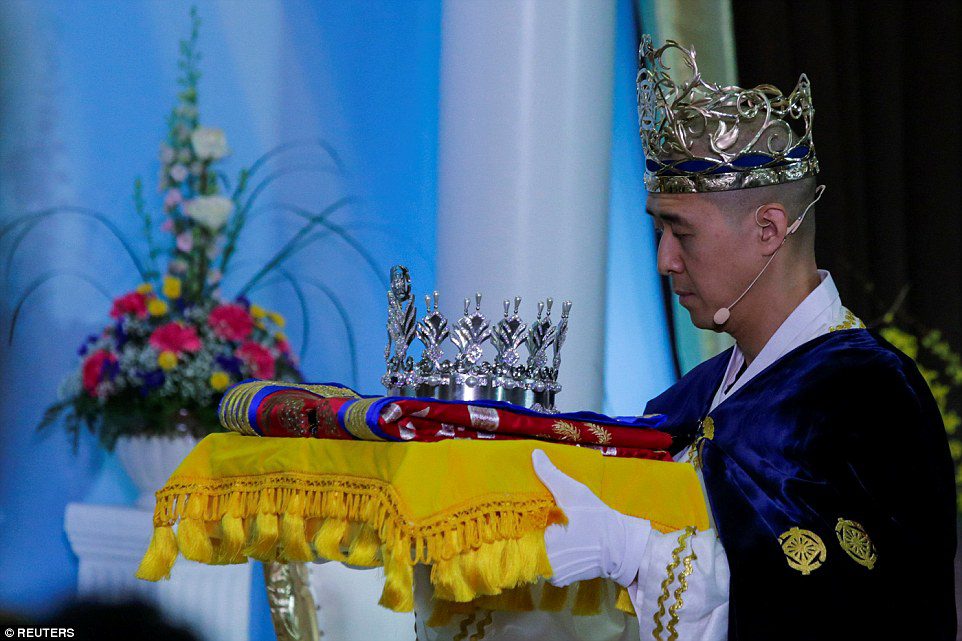 Reverend Hyung Jin Moon, the church’s pastor and the son of the late Sun Myung Moon, hosted the bizarre ceremony on Wednesday

Rev. Hyung Jin ‘Sean’ Moon, who believes the Bible prophesied the AR-15 as the ‘rod of iron’, had warned anyone planning to attend without a weapon, or a $700 coupon from a gun store proving they planned to buy one, that they wouldn’t be welcome.

Worshipers drank holy wine and exchanged wedding vows in the commitment ceremony, while church officials in white and pink robes, blessed their AR-15s.

Moon prayed for ‘a kingdom of peace police and peace militia where the citizens, through the right given to them by Almighty

God to keep and bear arms, will be able to protect one another and protect human flourishing.’

Tim Elder, Unification Sanctuary’s director of world missions, told worshippers the ceremony was meant to be a blessing of couples, not ‘inanimate objects,’ calling the AR-15 a ‘religious accouterment.’ The church has held at least one other ceremony featuring assault-style rifles.

Sreymom Ouk, 41, who attended the ceremony with her husband, Sort Ouk, and came with their AR-15, said the weapon is useful for defending her family against ‘sickos and evil psychopaths.’ 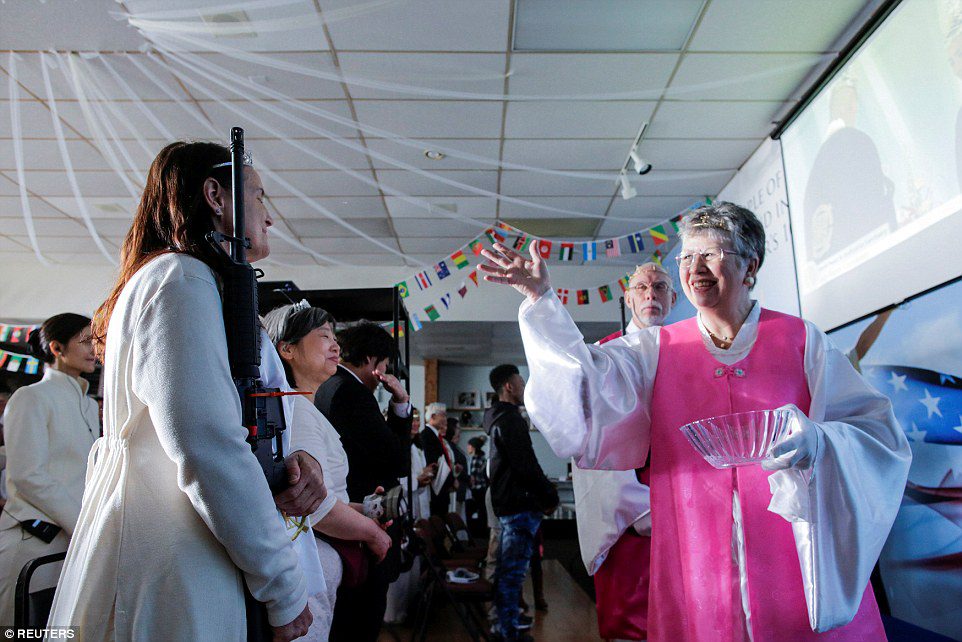 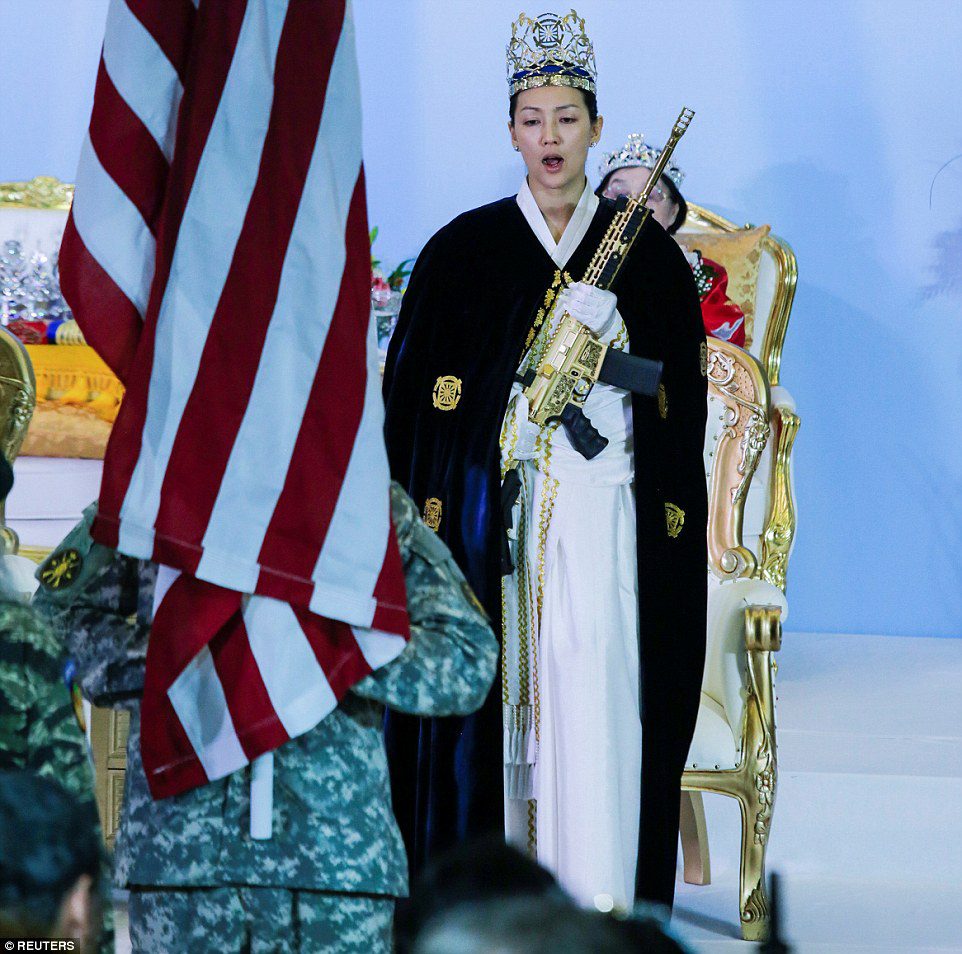 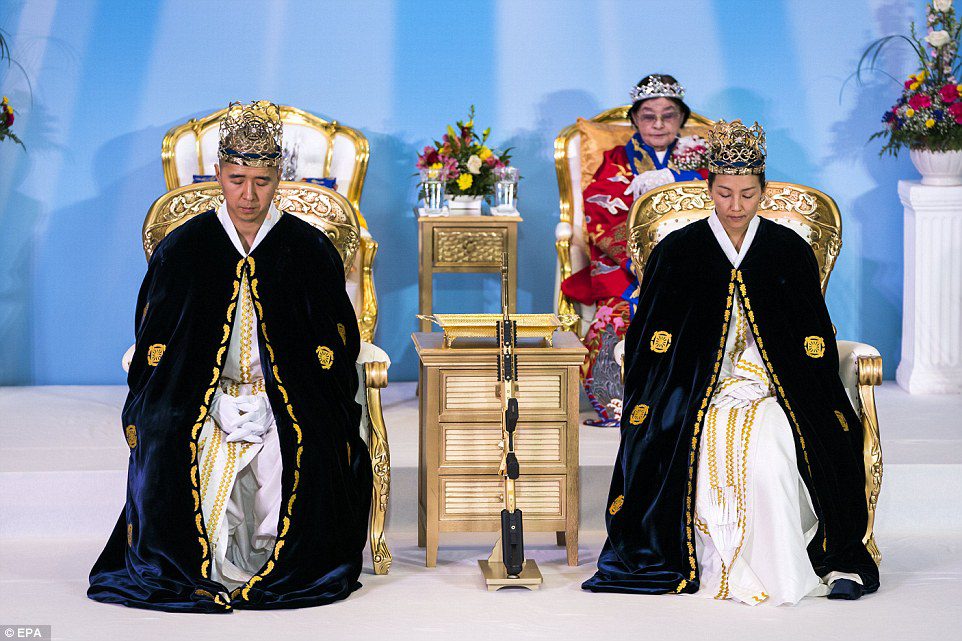 The Moons, both reverends at the controversial church, participate in the blessing ceremony for their congregation Many of the parishioners chose to wear crowns of bullets. This woman decided to bring up her bullet crown with pearls Another parishioner with the Sanctuary Church wore bullets on his forehead, and the symbol of the church, during a blessing ceremony

Emotions are still raw after the massacre, and in the past weeks, the survivors have emerged as powerful voices demanding stricter gun laws, and have organized anti-gun rallies in Florida, and an upcoming event in Washington DC next month.

One of those students, Emma Gonzalez, 18, wrote an open essay focused on the AR-15, the semiautomatic rifle that has, along with its other versions by various manufacturers, become a common thread in America’s deadliest mass shootings.

‘You don’t drive a NASCAR on the street, no matter how fun it might be, just like you don’t need an AR-15 to protect yourself when walking home at night. No one does,’ Emma said.

Yet Rev. Moon, a self-proclaimed messiah who founded the Unification Church, often described as a cult, argued in a prayer that God gave people the right to bear arms.

The sanctuary believes the AR-15 symbolizes the ‘rod of iron’ in the book of Revelation, and Moon believes the crown and rifle are ‘accouterments given to us by the king of kings.’ Dozens of gun-loving couples arrived, with their weapons in tow, for the rededication ceremony on Wednesday Several hundred couples with the Sanctuary Church, many of them armed with handguns and AR-15s, gather for a ceremony to rededicate their marriages at the World Peace and Unification Sanctuary in Newfoundland Rows of parishioners closed their eyes in prayer as they held onto their assault weapons, each wearing crowns or tiaras A parishioner with the Sanctuary Church holds onto his handgun, which churchgoers were encouraged to bring to a blessing ceremony

Church officials said that weapons were unloaded, secured with zip ties and checked at the door.

But the event sparked fear in the local area, and anti-gun demonstrators held a protest outside the church.

‘It’s scaring people in the community,’ one protester told a church member. ‘Are you aware of that?’

Lisa Desiena, from Scranton, protested outside the church with a sign that called the group an ‘armed religious cult.’

She said she owns a gun, but ‘I don’t need a freaking assault weapon to defend myself. The only thing they’re good for is killing. Period. That’s all that weapon is good for, mass killing. And you want to bless it? Shame on you.’

The ceremony also prompted Wallenpaupack Area School District to move students at an elementary school down the street to other campuses. The church’s leader, the Rev. Sean Moon, said in a prayer that God gave people the right to bear arms (a man holds up a family portrait) A woman has her weapon checked for being unloaded and zip-tied at the World Peace and Unification Sanctuary, Wednesday, Feb. 28, 2018, in Newfoundland, Pa. Worshippers clutching AR-15 rifles participated in a commitment ceremony at the Pennsylvania-based church. The event Wednesday morning led a nearby school to cancel classes for the day. The church’s leader, the Rev. Sean Moon, said in a prayer that God gave people the right to bear arms. (AP Photo/Jacqueline Larma) Church officials wear pink and white robes, while others donned camouflage gear as they walked through the church with flags Protesters held up signs that read ‘worship God, not guns’ and calling the church an ‘armed cult’

Moon is the son of the church founder Rev. Sun Myung Moon, a Korean evangelist and self-proclaimed messiah who died in 2012 aged 92.

Sanctuary is an offshoot of the Unification Church, whose followers are sometimes called ‘Moonies,’ according to the Southern Poverty Law Center, which refers to it as a cult. Advocate: Emma Gonzalez has emerged as one of the leading voices making the case for stricter gun laws, taking President Trump to task in a powerful speech during a rally in Fort Lauderdale