Heather Locklear was arrested for nearly biting her boyfriend’s nose off in a drunken rage, and then attacking three cops who came to break up the fight late Sunday.

A source in the Ventura police department tells DailyMail.com that Locklear ‘was wasted’ when she and Chris Heisser, the high school sweetheart she recently reconnected with, ‘got into a physical fight’ at her house in Thousand Oaks, California Sunday night.

The former Melrose Place star, 56, ‘practically bit the tip off of Heisser’s nose,’ the source said, before instructing a woman who works with her to call the police.

But her plan backfired when cops showed up on her doorstep and tried to put her in handcuffs.

The source said the actress snapped and ‘attacked three of’ the four officers – all in front of her ‘mortified’ adult daughter Ava, age 20.

Because she had claimed to have been beaten by Heisser, Locklear was first taken to the hospital for evaluation.

She was booked into the Ventura County Jail around 1 am on a felony count of domestic violence and three counts of misdemeanor battery on a peace officer.

Less than an hour later, Heisser himself was arrested, this time for driving under the influence. Captain Garo Kuredjian of the Ventura Sheriff’s Office told DailyMail.com that Heisser’s arrest was for DUI but could not give further details. A spokesman for the California Highway Patrol said the agency was unable to comment until the pending case against Heisser is concluded.

Sources told TMZ that he was spotted driving slowly on Highway 101, blew a 0.19 and a 0.20 blood alcohol level after being pulled over. The legal limit in California is 0.08. 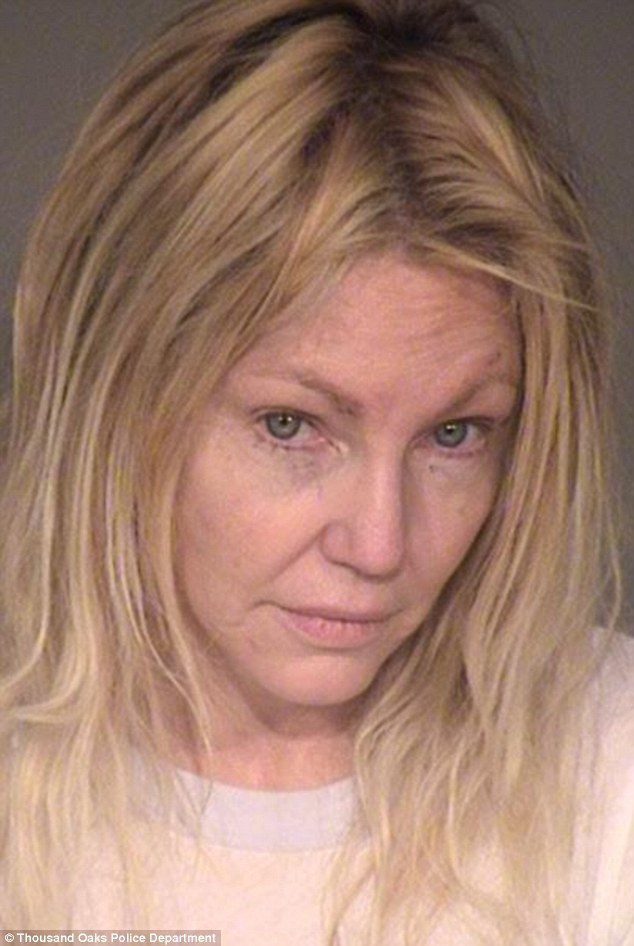 Heather Locklear was arrested for domestic violence and attacking three cops Sunday night. She’s pictured above in her most recent mugshot above 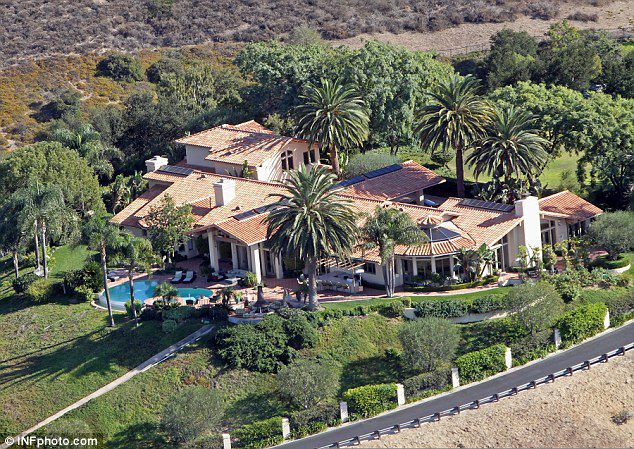 Both were released later Monday morning after posting bail. Locklear’s bond was set at $20,000.

Locklear’s first court appearance is scheduled for March 13, while Heisser’s DUI hearing is set for April.

Troubled Locklear has a history of drunken altercations and was arrested last September after crashing her Porsche into a ditch while driving to Heisser’s home.

No charges were filed after an investigation revealed she was sober at the time.

A source said Locklear and Heisser got into another booze-fueled fight three weeks before that crash.

In recent months, Locklear has posted multiple photos her new beau to Instagram.

Just two days ago, she also posted a picture of her flying to Boston with her dog.

Locklear has been married twice, first to Motley Crue drummer Tommy Lee from 1986 to 1993 and then to Bon Jovi guitarist Richie Sambora from 1994 to 2007, who she had her daughter.

Locklear also had a long-term relationship with fellow Melrose Place alum Jack Wagner. The two got engaged in 2011 but called it quits less than a year later. 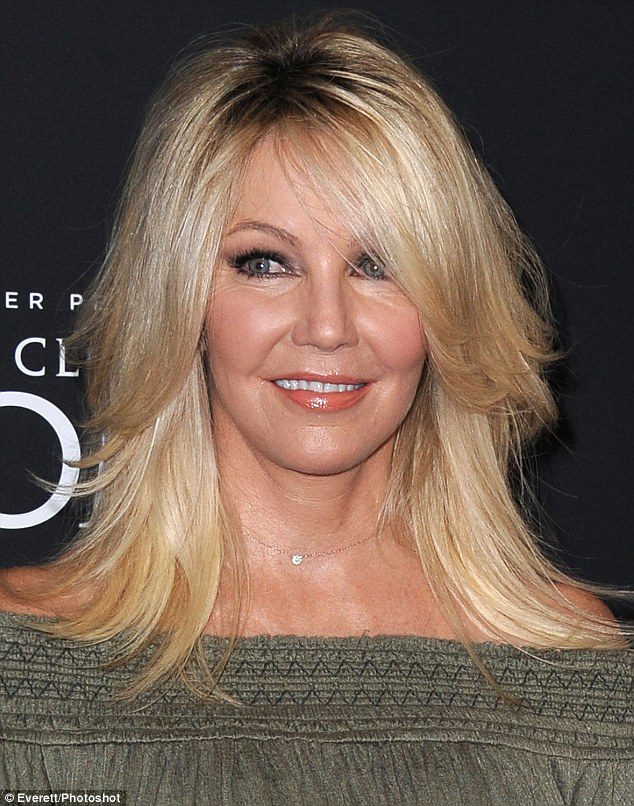 Locklear, 56, starred in such TV shows as Melrose Place and Spin City 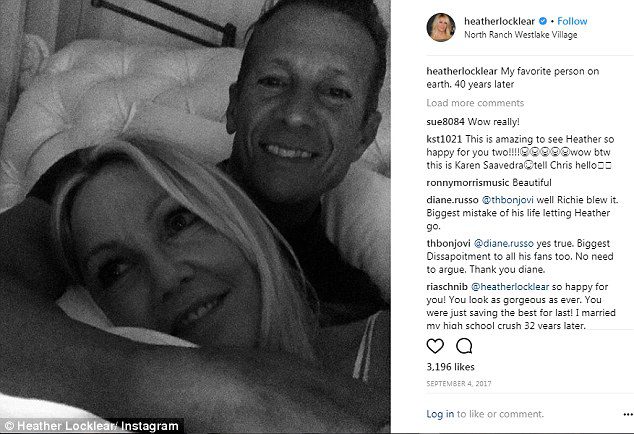 Cops were called to Locklear’s home to break up a fight between her and her boyfriend. Above, another recent picture with Heisser, who was Locklear’s high school boyfriend 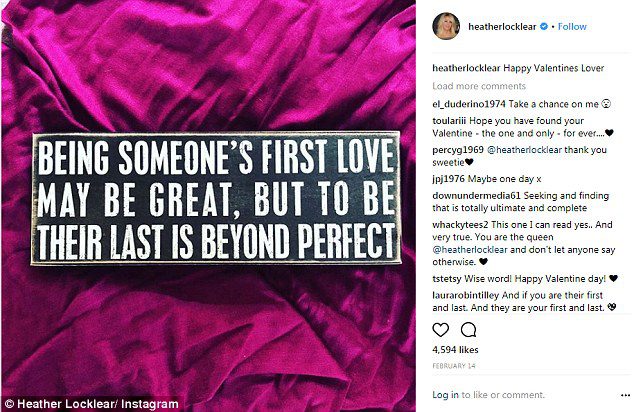 The 56-year-old actress has a history of domestic violence calls, as well as abusing prescription drugs.

In 2011, while dating Wager, LAPD officers were called to his home after the two allegedly got into a heated argument and she punched him.

A law enforcement source told TMZ at the time: ‘She lost it on him and he retaliated.’

No charges were filed by either party after the pair took part in a formal meeting at the LA County Attorney’s Office.

Locklear was pulled over in September 2008 on suspicion of DUI after she was seen driving erratically. An eyewitness told officials with the California Highway Patrol that Locklear ‘was revving her engine loudly, and backed over a pair of sunglasses several times’.

While a drug test found no alcohol or illegal narcotics in her system, she was charged with one misdemeanor count of DUI. 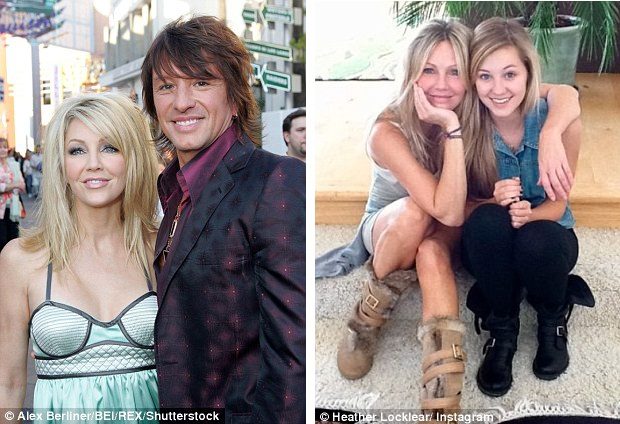 The Santa Barbara County Deputy District Attorney Lee Carter said he believed medication she was on for anxiety and depression ‘could have impaired her ability to safely drive a motor vehicle’.

Locklear pleaded no contest to reckless driving and the DUI charge was dropped. She was sentenced to three years of informal probation, a DMV driver safety class and a $700 fine.

In March of that year, paramedics and police officers rushed to Locklear’s home when a man claiming to be her doctor called 911, saying he feared she was trying to commit suicide. 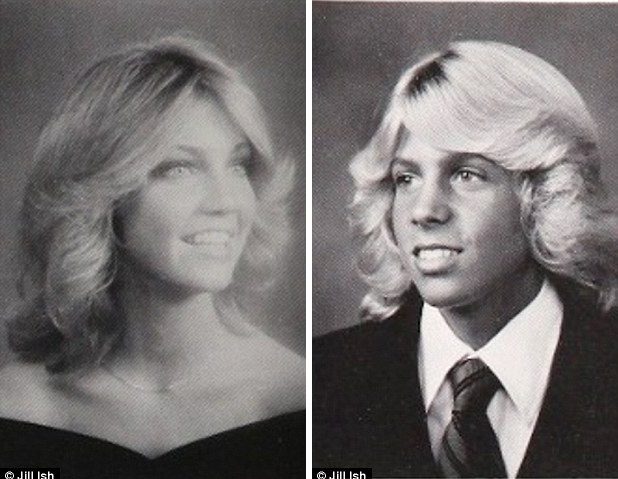 In June, Locklear checked herself into a medical treatment facility in Arizona for anxiety and depression and returned home about a month later.

In April 2010, she was arrested again for felony hit and run after crashing her BMW into a sign close to the gated community where she lived with Sambora. 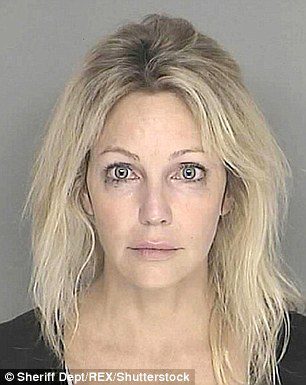 Locklear is pictured above after her 2008 arrest for DUI

On that occasion, Locklear was cleared due to ‘insufficient evidence’.

In January 2012, authorities responded to Locklear’s house again after her sister called 911, who feared her life was in danger after mixing prescription medication and alcohol. Locklear was taken to the hospital but was discharged the next day.

Heisser is no stranger to the inside of a jail cell himself and served two years in prison after being convicted on theft and fraud charges in Riverside, California, in 2011.

Since his release, he has stayed relatively clear of the law – picking up one citation for a traffic infraction in 2015.

But prior to his felony conviction, Ventura County records show he was a repeat offender – picking up a string of citations between 2008 and 2011.

Infractions on his record include using a cell phone while driving, driving with a suspended license and speeding.

Locklear is most famous for her roles on TV in the 90s, such as Melrose Place and Spin City. More recently, she appeared on the TV shows Fresh Off The Boat and Too Close To Home.