A man was arrested on a DUI charge early Saturday after he was spotted riding a horse along a busy Southern California freeway, officials said. 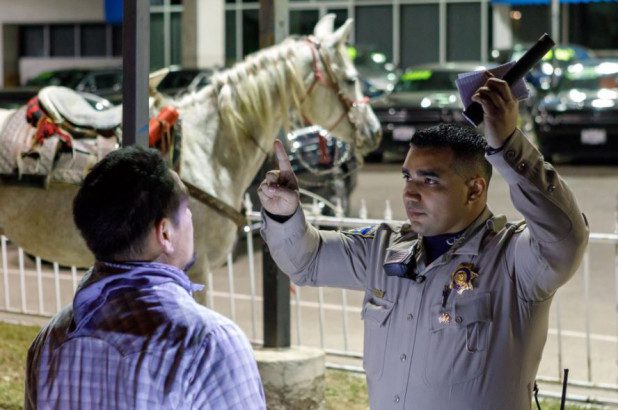 The California Highway Patrol’s Santa Fe Springs district posted on Twitter that the pair were spotted on the eastbound 91 Freeway in Long Beach, located south of Los Angeles.

“We get a chuckle out of the interesting situations we encounter from time to time, but one thing the CHP does not do is ‘horse’ around with DUI,” the patrol district wrote on Twitter.

Police posted photos of the man’s arrest, with the horse keeping an eye on the situation.

No injuries were reported during the entire incident, and while it may make for a good joke the CHP said the arrest served as a reminder to not “put yourself, your beautiful animal, or others in danger of being killed in traffic.”

“No, you may not ride your horse on the freeway, and certainly not while intoxicated,” police said.

The horse was eventually released to the man’s mother who came to the scene quickly after the arrest, according to KTLA.

So a horse walks onto the 91 freeway…no joke. Rider arrested by CHP for DUI in the greater Long Beach area. Don’t put yourself, your beautiful animal, or others in danger of being killed in traffic. @CBSLA @NBCLA @KTLA @ABC7 @FOXLA @CNN @FoxNews @ABC @NBCNews @CBSNews @CHP_HQ pic.twitter.com/YdiL54ctvQ