When Andy Fierlit told his wife that he would stick by her side in sickness and in health he meant it.

Roughly 27 years ago Donna Fierlit suffered a brain aneurysm. She was 45 years old at the time and was left partially paralyzed. She has to use a wheelchair and suffers from short-term memory loss.

Doctors told Andy to put Donna in a nursing home. Andy told CNN in an interview Friday that he refused. 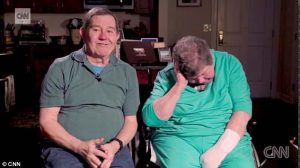 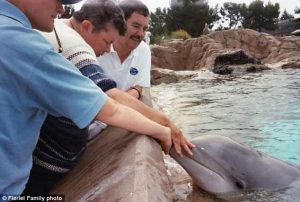 Instead, the couple decided to travel the world visiting more than 20 countries and all seven continents 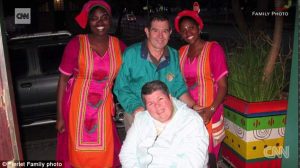 ‘I said no way, that’s not gonna happen. I made a promise to her that we would go on to work out as best a life as possible,’ Andy said 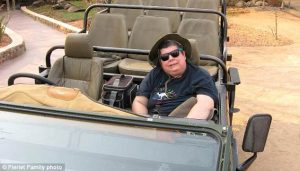 The next place the couple hopes to visit is Scandinavia. They hope with some generosity they will be able to make the trip happen

‘I said no way, that’s not gonna happen. I made a promise to her that we would go on to work out as best a life as possible,’ he said.

Andy and Donna met 58 years ago as teenagers at a church dance. Andy said when he saw Donna he approached her and asked for a stick of gum. She told him to ‘get lost’ but something sparked between them.

Not long after they began dating, the couple tied the knot. That was in 1966. The Connecticut lovebirds now share four children together, 12 grandchildren and dozens and dozens of memories.

‘Love is something you have to work at,’ Andy told CNN.

‘It has to be part of you.’ Donna added.

‘You don’t spray it on you like a cologne and all of a sudden you’re in love.’ Andy continued.

Determined to make the best of their situation after Donna’s aneurysm, the couple started traveling. Their first trip was a cruise to Bermuda.

In the nearly three decades since the couple has traveled to more than 20 countries and all seven continents.

‘Africa, Australia, Asia, North America, South America, Antarctica,’ Andy said, rattling off some of the places they’ve been too.

Traveling with someone in a wheelchair can be tricky, Andy said, but they always manage to make it work. 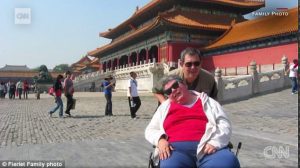 Andy and Donna met 58 years ago at a church dance. He said when he first approached Donna told him to ‘get lost’ 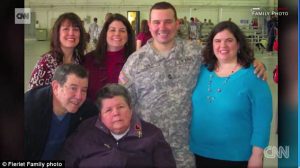 The couple, who married in 1966, have four children and 12 grandchildren 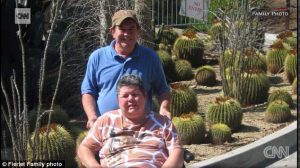 Andy and Donna are pictured during one of their vacations. They plan to keep traveling the world 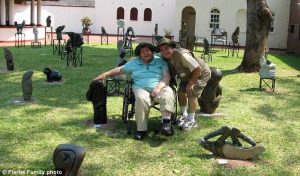 Donna and Andy, pictured on another vacation, nicknamed her wheelchair ‘Proud Mary’ because she said it ‘keeps on rolling’

During a trip to Europe, he said Donna had to ride in the cargo section of a train because it couldn’t accommodate her wheelchair. Regardless, they had a good time.

They even have a hilarious nickname for Donna’s wheelchair: ‘Proud Mary’.

‘She keeps on rolling,’ Donna told the outlet.

Up until now, Donna and Andy have been paying for their trips with their personal savings but it’s starting to run low.

Andy said he’s hopeful that with a bit of generosity they can continue their world travels. The next place they want to visit is Scandinavia.