Albanian police have rescued malnourished and diseased animals from the ‘zoo from hell’ after a government minister in the country saw MailOnline’s report on their plight.

Shocking pictures were taken at the Safari Park Zoo in Fier, southwest Albania, showed a ‘severely malnourished’ lion living in cramped conditions with what appeared to be an untreated eye injury.

Other animals, including a zebra, a thin-looking wolf, and several deer, were seen locked up in desolate concrete cages in the privately-owned zoological park. 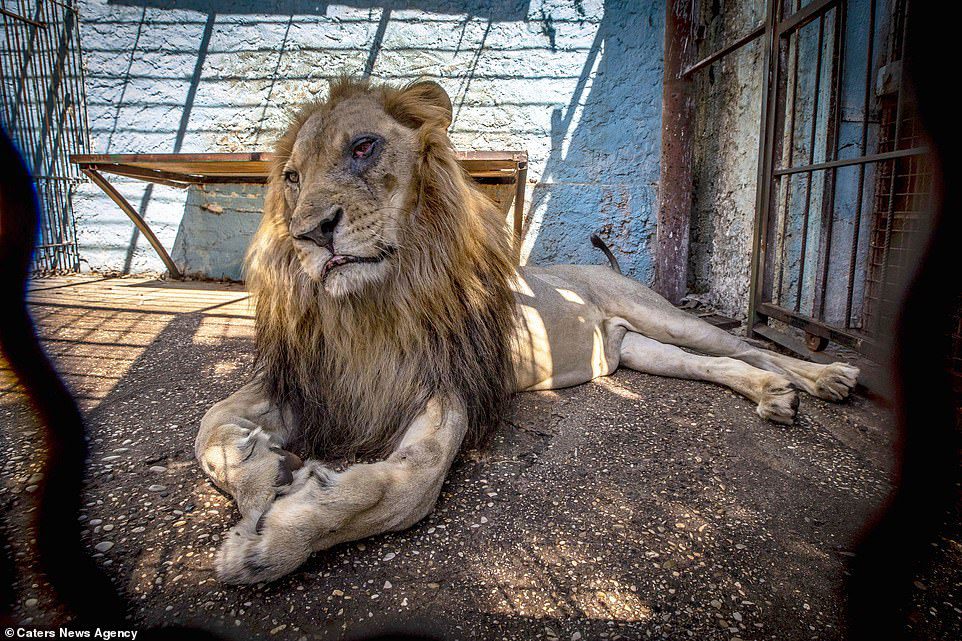 Shocking: A skinny-looking lion with an infected eye lies in its barren cage at a zoo in the Albanian city of Fier 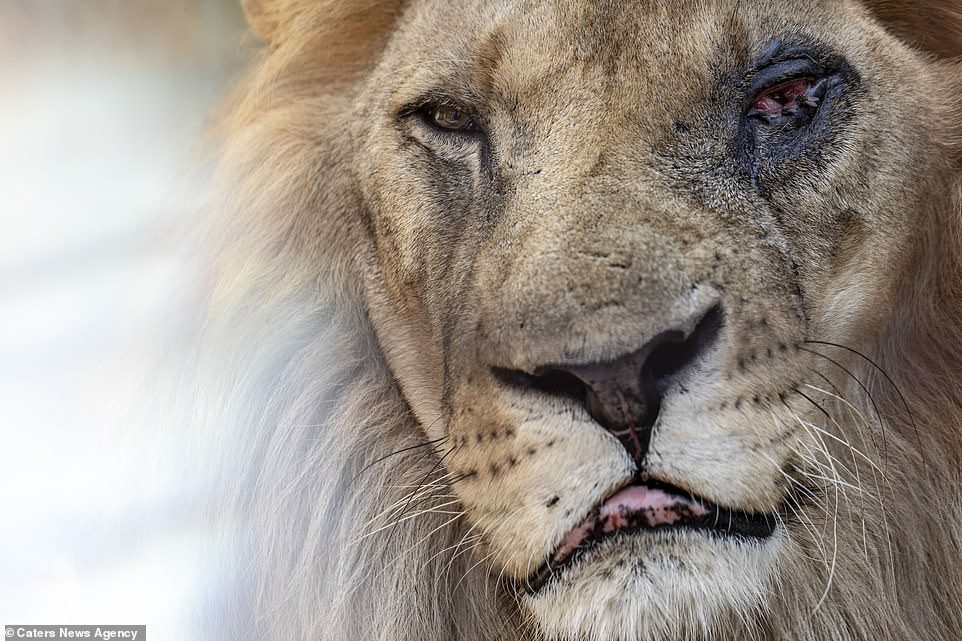 Mistreated: A close-up photograph makes it clear how badly infected the male lion’s eye is 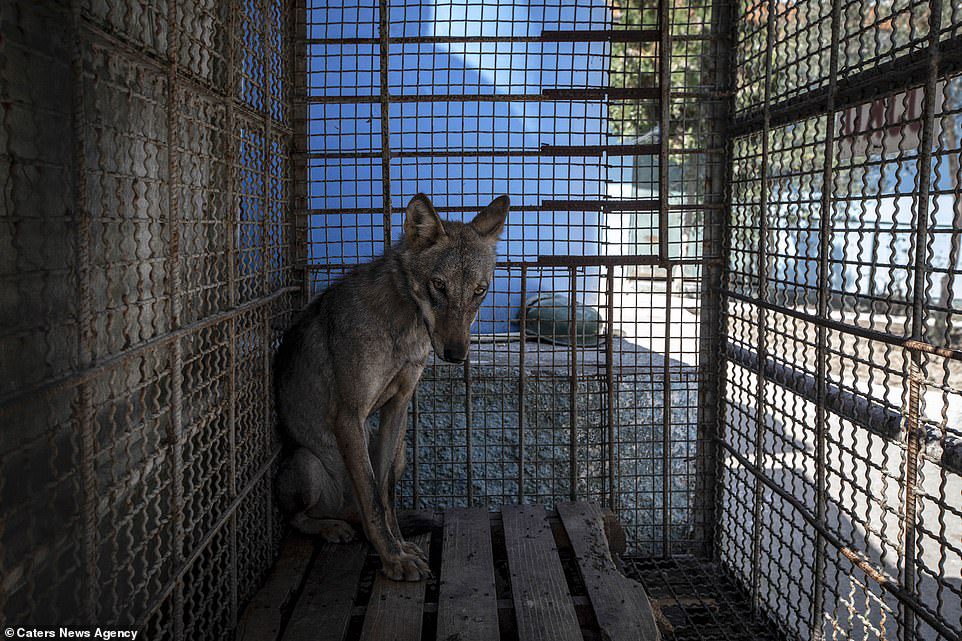 Malnourished: This photo of a wolf shows it huddled in the corner of a tiny cage at the animal park 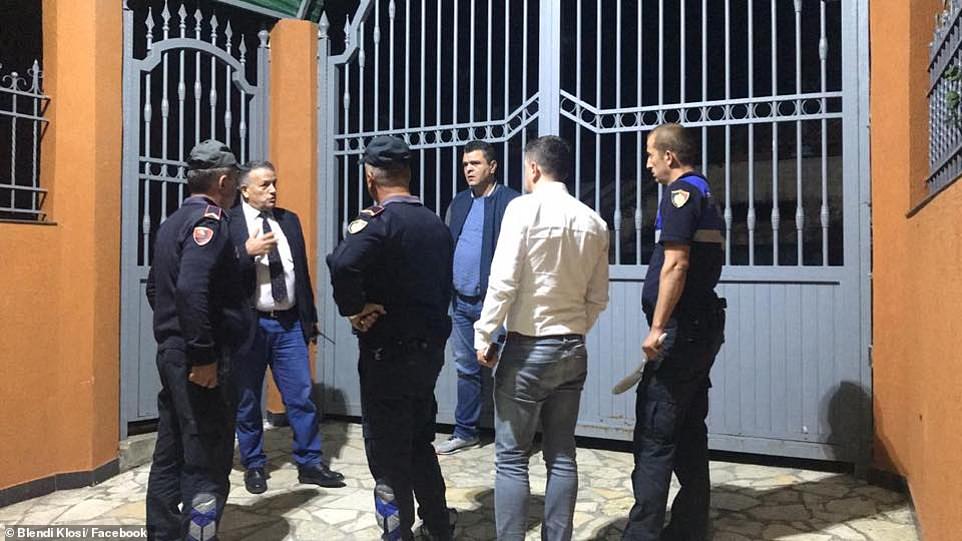 Environment minister Blendi Klosi shared this photo on his Facebook page on Tuesday night. It appears to show a group of police officers at the zoo

He said: ‘In response to the news published in the Daily Mail and dozens of messages on the unacceptable situation where some animals live in a private zoo in Fier, I urgently ordered the launch of an action by the Environmental Inspectorate, which in cooperation with the Fier Police and the Animal Protection Association have decided to displace the animals in order to protect them.’

The images were reportedly taken by an anonymous photographer, determined to expose the conditions at the zoo.

They show lions and other animals languishing in desolate, dirty concrete cages surrounded by their own waste and without even the most basic provisions such as fresh water and shade.

The photographer claimed vets who have visited the macabre facility described what they were greeted with as ‘some of the worst animal welfare conditions they have ever seen’.

They said: ‘All the animals are kept in tiny, unhygienic concrete cages with no possibility to retreat from the elements or from the prying eyes of visitors to the zoo. 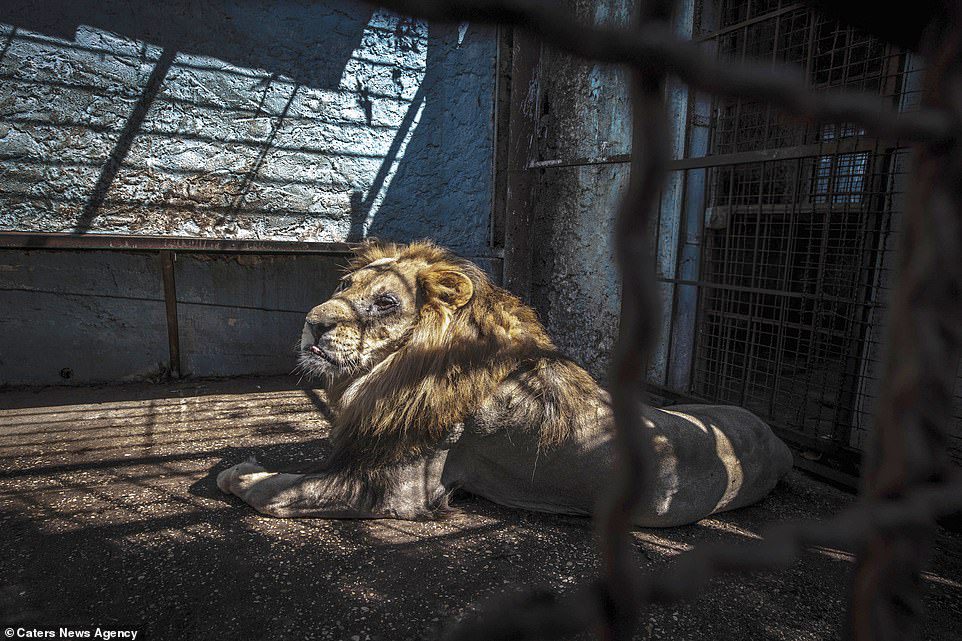 Anger: The Safari Park Zoo in Fier is reportedly attached to a bar and restaurant which is owned by the same person 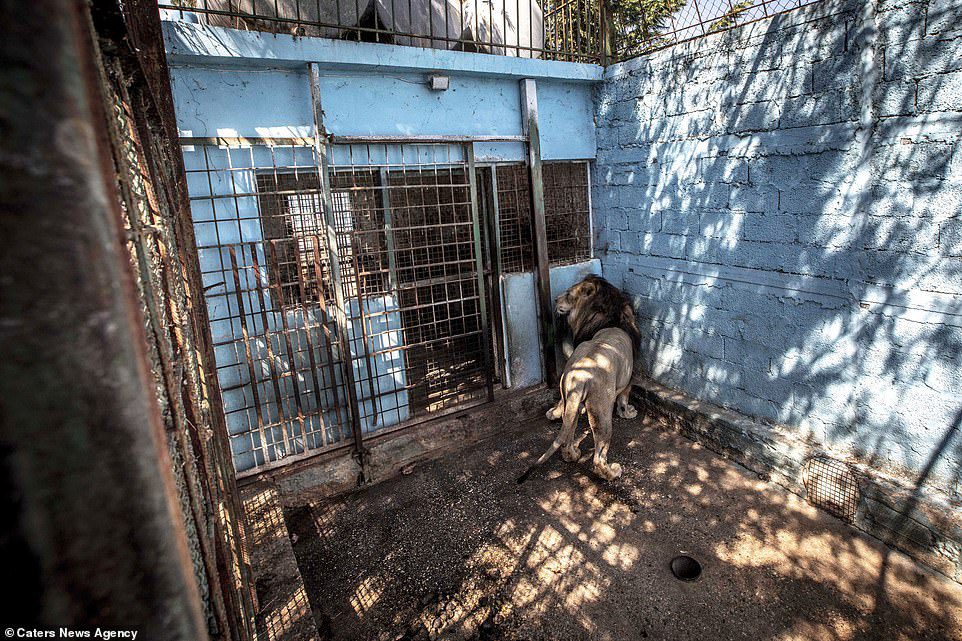 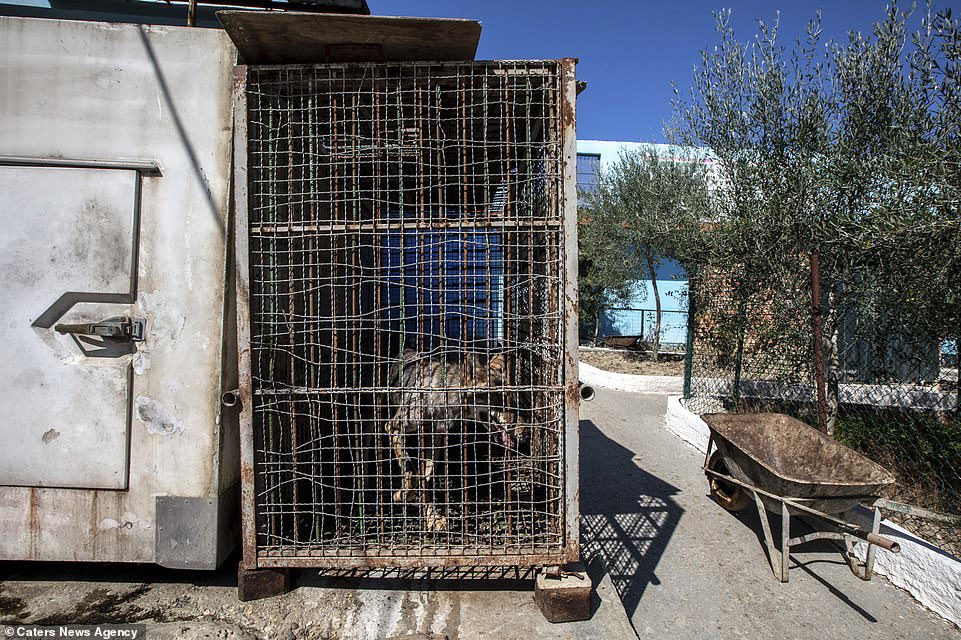 Nowhere to go: The wold is seen in its tiny cramped metal cage in the ‘animal park’ in southwest Albania 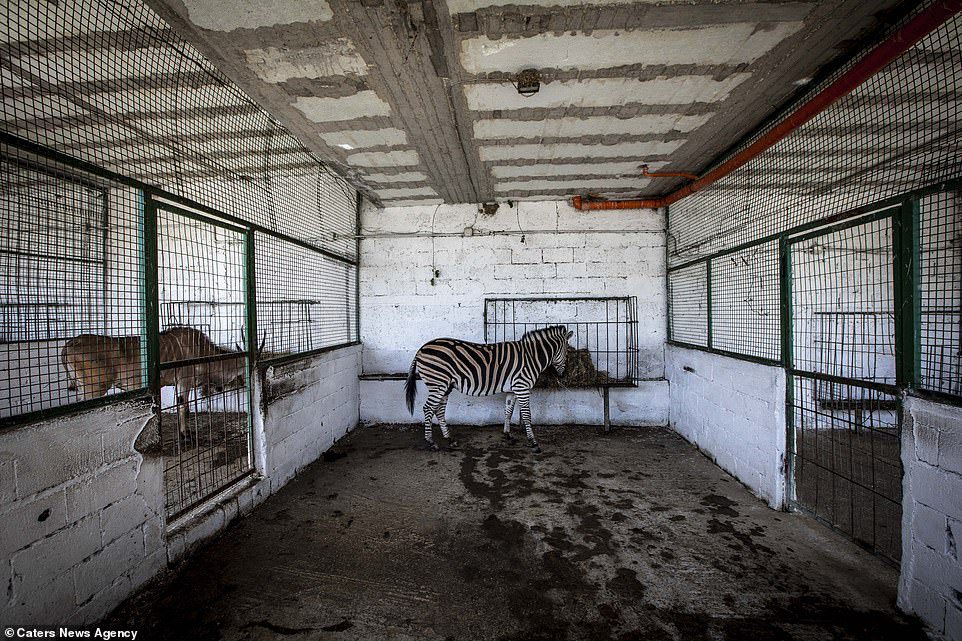 Appalling: A zebra is seen in its pen next to what appears to be a wildebeest

‘The animals suffer from a range of physical and psychological issues caused by the miserable conditions, improper veterinary care and lack of an appropriate diet.’

The photographer said that as well as the animals seen in the images, there are also a bear and monkeys, as well as three adult lions thought to have been there since they were cubs.

It is understood they were among around 14 lion cubs born at the zoo. The rest are thought to have died, been sold or simply been given away to friends of the owner.

International animal welfare organization Four Paws, which has has been active in Albania in recent years, called the situation at the zoo ‘absolutely unacceptable’. 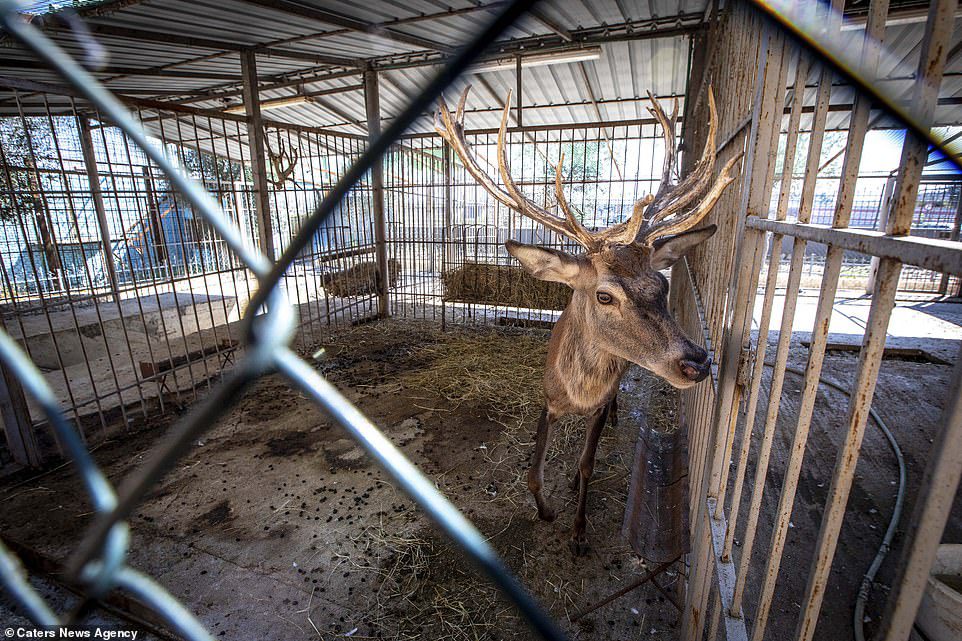 Better than nothing: A deer is seen moving around on the concrete floor where it has at least been given some straw

‘The conditions at the Safari Park Zoo do not even come close to being appropriate, particularly for large wild animals like lions and bears which have very specific environmental and dietary needs,’ said Ioana Dungler, who heads up Four Paws’ Wild Animals Department.

‘Signs of the mental and physical impact of being kept in such abject surroundings can be clearly seen on each of the poor animals at the zoo.

‘It is undoubtedly very far from most peoples’ understanding of a ‘safari park’ and represents an animal welfare emergency.

‘Put simply, if something is not done soon these animals will continue to suffer and most likely die in these unspeakable conditions.’ 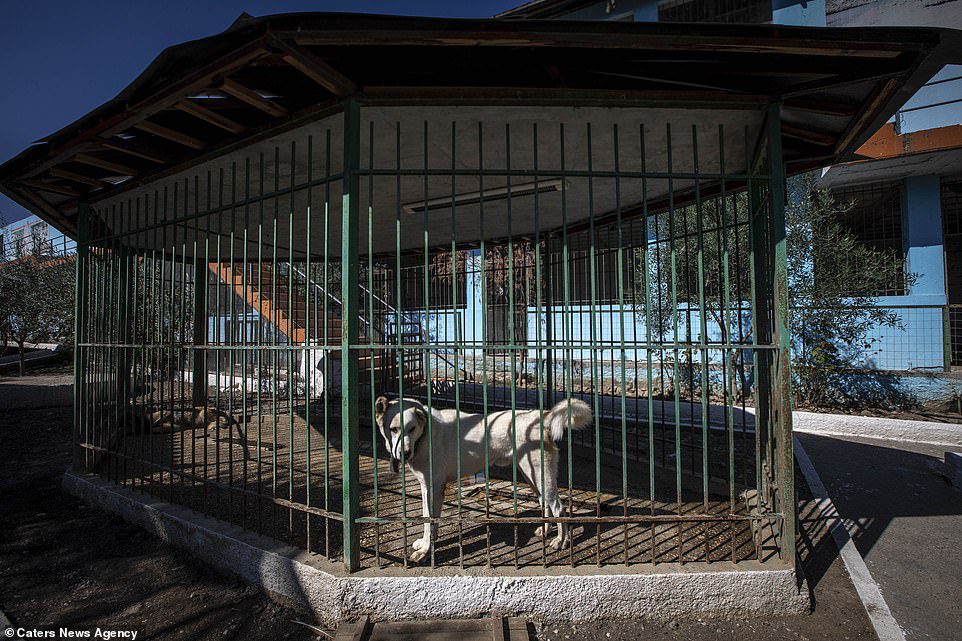 Another cage in the animal park in Fier, southwest Albania, appears to be the home of a lone dog