Muslim women have been warned to hide their hijabs and not to pick up their children from school alone ahead of the sick ‘Punish A Muslim Day’.

As April 3, the day chosen, approaches, several WhatsApp messages circulating in Islamic communities are warning people about going outside and encouraging them to lock their doors properly.

One WhatsApp message explains the shocking letter in full, including details about the ‘points system’, reports the Mirror.

It reads: ‘This is not a joke its sick plan they have a pointing system where they will b giving points and reporting on a site with vids etc punishments include taking off hijabs…beating up and even acid throwing. 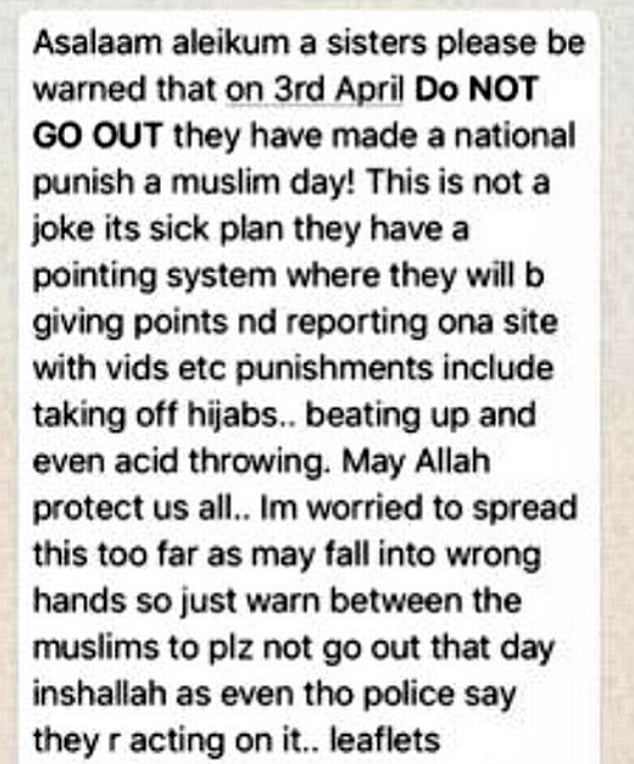 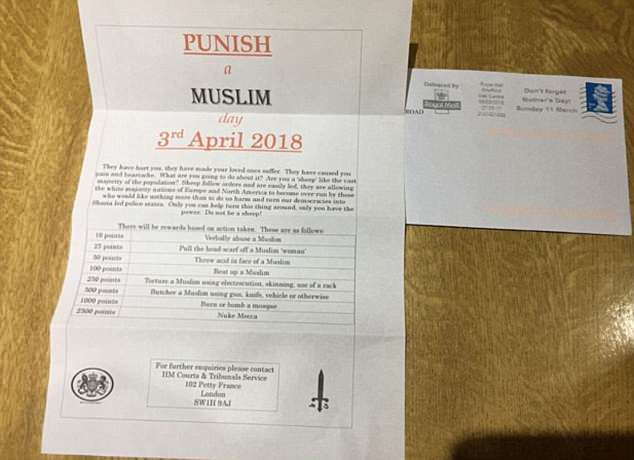 The letter, pictured, was sent to people in London, the Midlands, and West Yorkshire and declared April 3 the ‘Punish A Muslim Day’

‘May Allah protect us all.’

The horrifying points system detailed in the original letter said 10 points would be awarded if you ‘verbally abuse a Muslim’, or 2500 points for ‘nuking Mecca’.

Other sickening acts included 50 points for throwing acid in a Muslim’s face and 1000 points for bombing or burning a mosque.

The message goes on to say that ‘even though police say they r acting on it.. leaflets have been posted thru doors in east London and kids have heard about it’.

Last month the Counter-Terrorism Unit said in a statement: ‘Police are investigating a number of reports of potentially malicious communications sent to individuals across the UK. 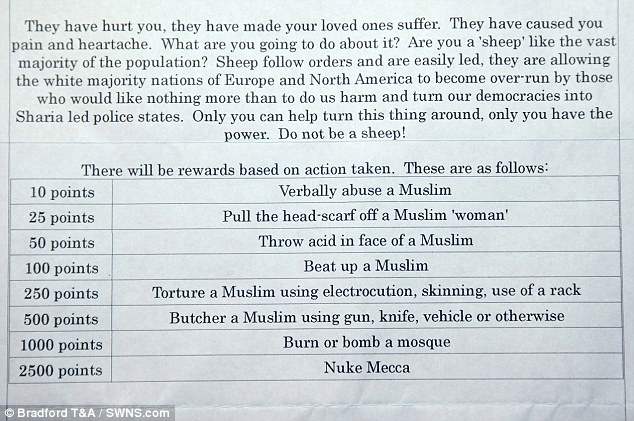 The full letter details rewards based on a points system which ranged from 10 points for verbal abuse to 2,500 for ‘nuking Mecca’. One of the messages circulating warned women to cover their hijab with a hat or coat

‘Counter Terrorism Policing North East are coordinating the investigation at this time and will consider any potential links to existing inquiries.

‘Anyone with any concerns about a communication they may have received should contact their local police force.’

Another WhatsApp message seen by the Mirror advises women to walk in groups of three or four when taking their children to school, and to try and hide their hijab with a hat or coat as one act on the sickening list is pulling hijabs off women.

The message goes on to say that the threat is only for a limited time, but that they should explain what is happening to their children in a calm and non-frightening way.