Saudi Arabia has executed an Indonesian maid who killed her employer during a rape attack, sparking outrage in Jakarta. 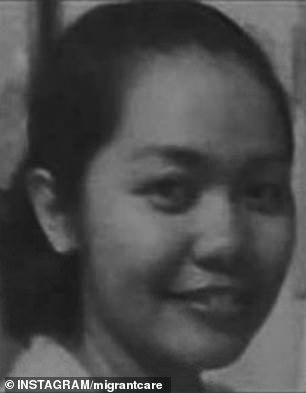 Indonesian maid Tuti Tursilawati was executed by Saudi Arabia after she killed her boss who was raping her. Jakarta has demanded to know why Saudi Arabia didn’t give prior notice of the execution

Ms. Tursilawati, who was working in the city of Ta’if, was found guilty of killing her employer in June 2011.

It was the fourth time in three years that Saudi Arabia had failed to notify Jakarta before executing an Indonesian migrant worker.

‘We have called Saudi Arabia’s foreign minister and conveyed our protest,’ Mr. Widodo was quoted as saying by the office of his cabinet secretary.

Indonesian advocacy group Migrant Care said in September that Ms. Tuti Tursilawati had been defending herself from being raped.

The office of the cabinet secretary cited the Migrant Care assertion.

The Saudi ambassador to Indonesia had been summoned to discuss the matter, the president said. 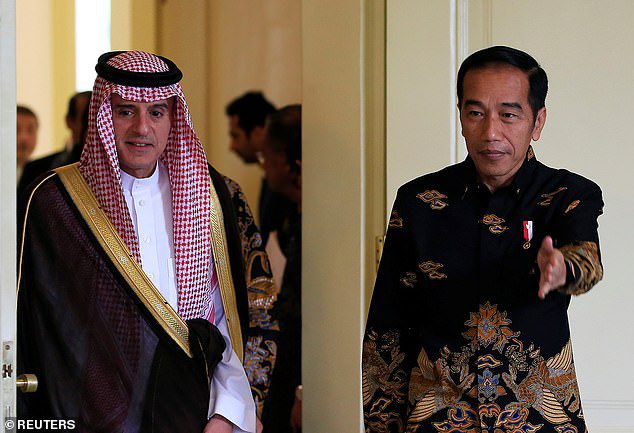 Indonesian President Joko Widodo (right) greets Saudi Foreign Minister Adel Al-Jubeir in his Bogor presidential palace on October 22, 2018, only a week before Tuti Tursilawati was executed. The execution was the fourth of an Indonesian worker in three years where the Saudis failed to give prior notice to Jakarta

The Saudi embassy in Jakarta did not answer calls seeking comment.

‘The kingdom of Saudi Arabia has ignored principles of human rights, including a right for everyone to live,’ said Abidin Fikri, a member of Indonesia’s parliament.

During the meeting, Mr. Marsudi emphasized the importance of having a mandatory consular notification before carrying out death penalties.

Indonesia’s Government has also called for a thorough probe into the death of Jamal Khashoggi, a Washington Post columnist and a critic of Saudi Arabia’s de facto ruler, Crown Prince Mohammed bin Salman. 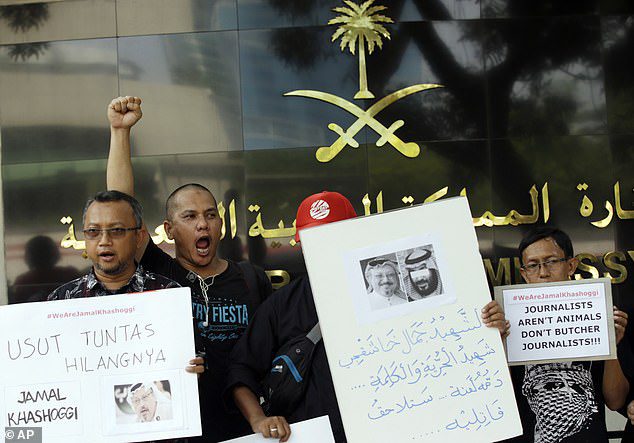 Indonesian journalists protest on October 19 against Saudi Arabia’s murder of columnist Jamal Khashoggi. The Indonesian government has demanded that there be a thorough investigation of Mr. Khashoggi’s death in the Saudi consulate in Istanbul

Saudi Arabia is the world’s biggest destination for Indonesian maids and earlier this month the two countries signed a new agreement to jointly ‘supervise, monitor, and evaluate’ the workers.

After the execution, the executive director at Indonesia’s Migrant Care advocacy group, Wahyu Susilo, called on Indonesia’s government to cancel the agreement.

‘It turned out that Indonesia’s request [to protect the rights of migrant workers] was ignored by executing Tuti.’

There are currently 18 Indonesian migrant workers on death row in Saudi Arabia.

An Indonesian migrant worker, Muhammad Zaini Misrin, was executed in March this year for killing his employer, and two Indonesian female domestic workers, Siti Zaenab and Karni, were beheaded in April 2015.