A father has gone above and beyond to build his toddler son the ultimate cubby house – complete with a carport, a Mercedes convertible, and an outdoor barbecue.

Dale, from Melbourne, transformed the $199 wooden cubby house he purchased from Kmart into a stunning Hamptons-inspired miniature property so he could surprise his little boy on Christmas Day.

Posting on Facebook, the father wowed other parents after sharing pictures of his spectacular cubby house transformation with the caption: ‘Did I go overboard?’

The pictures show the beautiful home with a veranda, a carport with steel roofing, outdoor lighting, and a white picket fence. 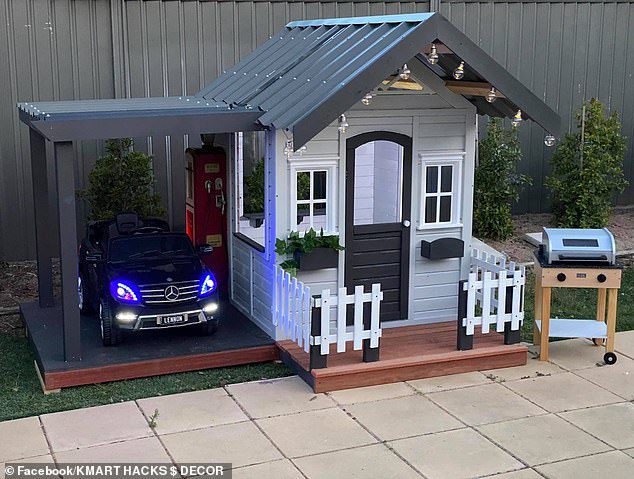 An Australian father has gone above and beyond to build his toddler son the ultimate cubby house – complete with a carport, a Mercedes convertible, and an outdoor barbecue

Dale explained he used Colorbond steel and tinted Laserlite to extend the depth of his son’s cubby house by 600mm.

‘Extended the depth of my son’s cubby using the original roofing panels, made new roof and carport, extended roofline for a veranda,’ he said.

From there, he revamped the space to include raised timber floor and Merbau decking, picket fence made from the trellis, solar lighting and LED interior lighting.

To ensure the cubby house stays waterproof outside all year round, he painted the exterior in weather shield, ‘sprayed with an airless gun’.

He added: ‘Ramp and interior fit-out in the works.’ 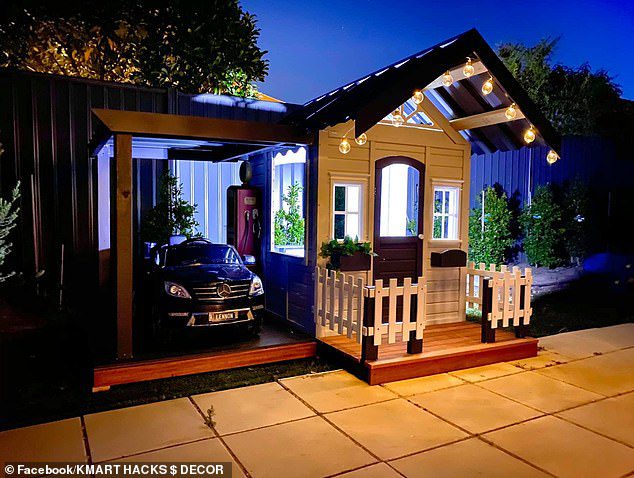 The pictures show the beautiful miniature home with a veranda, a carport with a Mercedes convertible, outdoor lighting, and a white picket fence 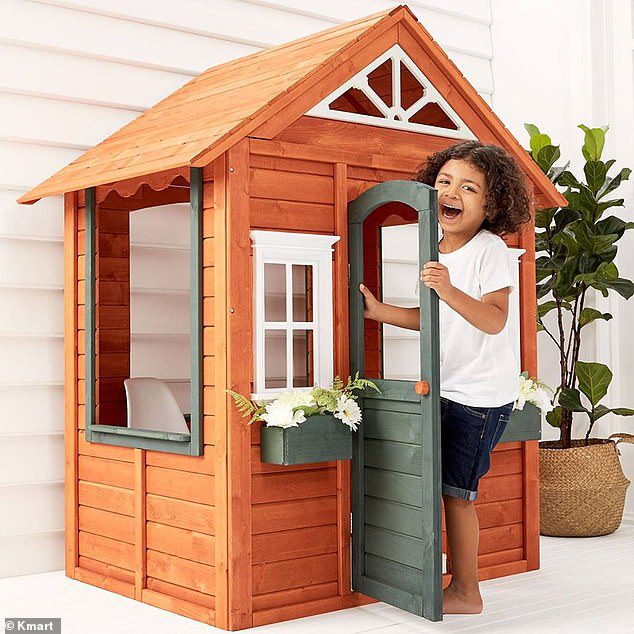 Hundreds of parents praised the father for giving his son the ‘best gift ever’.

‘That is absolutely a dream gift,’ Diane said.

‘Overboard to some, isn’t overboard for others. It looks so good! Plus if it encourages kids to want to play outside it’s a win,’ Bec said.

Chelle said: ‘You won’t be able to use the phrase “whilst you live under my roof”. They will just stroll straight out the back, kick back in their own little home, flipping burgers on their BBQ and cruise off in their car. Best gift ever. I want to be reincarnated as your child.’

Melissa said: ‘So awesome. Best Daddy of the year I reckon.’

Amy said: ‘Who are we to judge how you spoil your kid? I bet their eyes lit up when they saw it, how amazing!’

And Sarah said: ‘Overboard? No way! If I had the ability to do that, I would! Everyone wants to talk about being “too much” or “overboard” but if I had the money and time I would give my kids the absolute world.’