Undercover police officers have performed a covert operation to catch drivers on their phones by dressing up as windscreen washers.

In his right hand was a black and silver squeegee, but the man was not all he seemed. 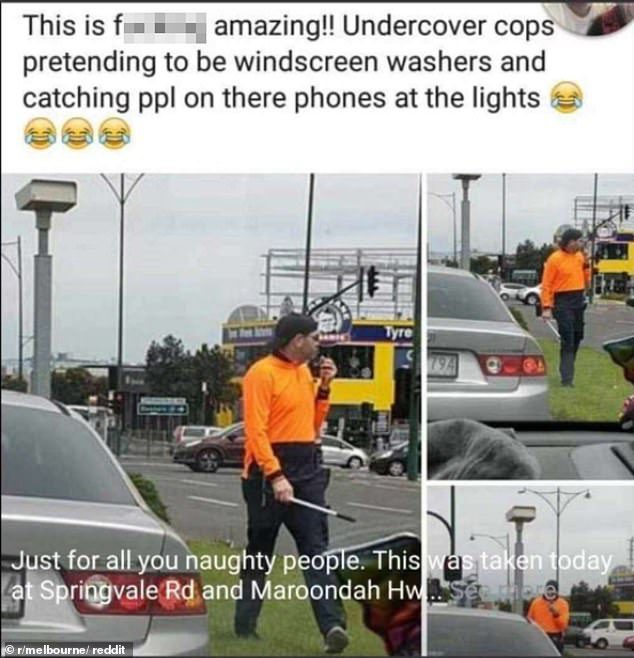 The Facebook post said: ‘This is amazing. Undercover cops pretending to be windscreen washers and catching people on their phones at the lights.’

The photos were taken at the intersection of Maroondah Highway and Springvale Road in Nunawading, eastern Melbourne.

A spokesman said: ‘Part of the operation involved covert observations of drivers in stationary vehicles.’

The undercover officers would radio their colleagues 200m down the road, who then pulled the driver over and issued a fine.

‘Police issued 38 infringement notices to drivers for using their mobile phone while driving.’

Taking into account the standard on-the-spot fine, the operation would have earned authorities around $18,390.

The spokesman added officers did not actually wash windscreens.

The cunning tactic, which has since gone viral, drew widespread praise from social media commenters.

One user said: ‘Clever! You know what if it saves lives go for it. The number of drivers I pass and see them look down at their phones’

One user said: ‘Clever! You know what, if it saves lives go for it. The number of drivers I pass and see them look down at their phones….’

Another also praised the operation, even if it was limited to observing the lights but not the open road.

They said: ‘It is meant to change the blase behavior around touching devices. If you do it at a set of lights, you’re more likely to do it whilst driving.’

But not everyone was thrilled with police resorting to disguises to catch minor misdemeanors, with one user saying ‘how low can you go’.

Some, meanwhile, thought the officer could have improved his disguise as ‘window washers don’t wear hi-vis’

Some, meanwhile, thought the officer could have improved his disguise as ‘window washers don’t wear hi-vis’.

Daily Mail Australia contacted Victoria Police for comment, who said they were investigating the matter.

The penalty for using a mobile phone or device under the Victorian law is four demerit points and an on-the-spot fine of $476.

Roadside window washers are only legal in the ACT in Australia.

That ruling has still been challenged in Canberra in recent years, with one coroner partly blaming the practice for distracting a driver at an intersection – who was then fatally struck by a truck with faulty brakes.