This has been a tough year in terms of the pure talent we lost. Another victim has been claimed, acting legend Carrie Fisher. Fisher’s daughter, Billie Lourd, said in a statement that her mother had died following a heart attack last week, Fisher, herself wants us to think that she died in another way. 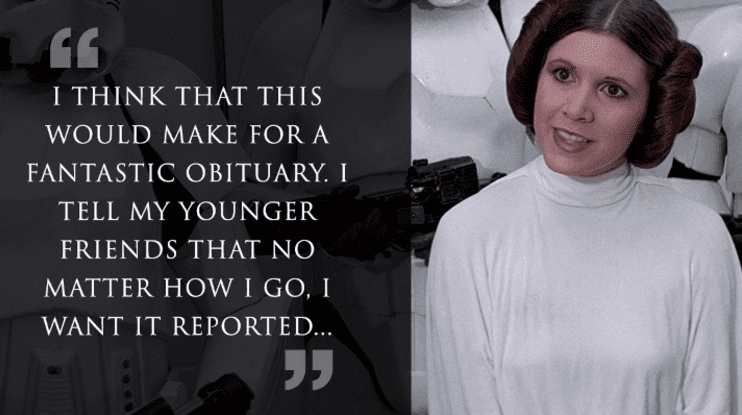 In 2008, Fisher wrote an article in which she retold a conversation she has with director George Lucas on the first day of filming Star Wars: A New Hope.

“Remember the white dress I wore all through that film? George came up to me the first day of filming, took one look at the dress and said: ‘You can’t wear a bra under that dress.'”

“He said it with such conviction. Like he had been to space and looked around and he didn’t see any bras or panties anywhere.”

“He explained. ‘You go into space and you become weightless. Then your body expands but your bra doesn’t, so you get strangled by your own underwear.'”

“I think that this would make for a fantastic obituary. I tell my younger friends that no matter how I go, I want it reported that I drowned in moonlight, strangled by my own bra.”

And her fans seem to prefer this version of events much more than reality.

please honor carrie fisher’s wishes and include in her obituaries that she “drowned in moonlight, strangled by her own bra.” ❤️❤️❤️ pic.twitter.com/Pj5sRsIvkz

@threelisabeth @BenLillie So Harrison Ford was going commando in those tight leather pants?

@threelisabeth @stxrmpiIot thank you for that! I remember her saying that and it made me laugh so hard! I needed that laugh just now❤️❤️❤️❤️

So let’s remember how this legend really died. 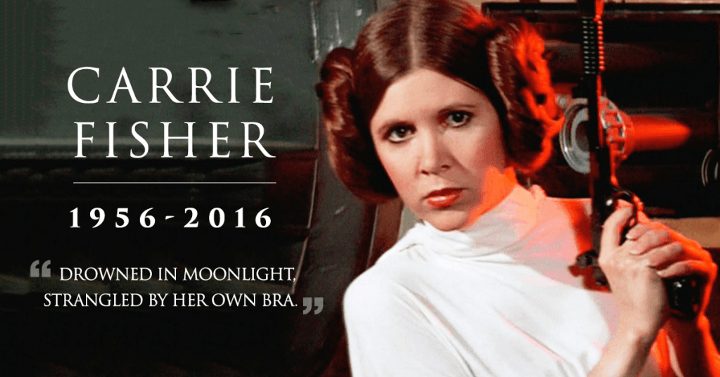