Home
Humanity
When He Passed Away, He Left Something To His Town That Can Never Be Forgotten

Fred Pitzner, a farmer, who lived in Gaylord, Minn., had no heirs.  So when he passed away, he decided to leave his local emergency services organization enough funds to purchase an ambulance. Pitzner’s good dead led the Gaylord EMS to pay-it-forward by making sure another town received an ambulance as well.

President, Tom Webster of Gaylor EMS donated their old ambulance to nearby Comfrey. Comfrey had a 30 year old ambulance.  The old Gaylord ambulance was newer at 17 years old and they were happy to accept it. Webster, was unfortunately unable to see the exchange, as he was killed in a tragic accident before it happened. Pitzner’s nephew, Steve Pitzner said that he knows his uncle would be proud of what has happened! 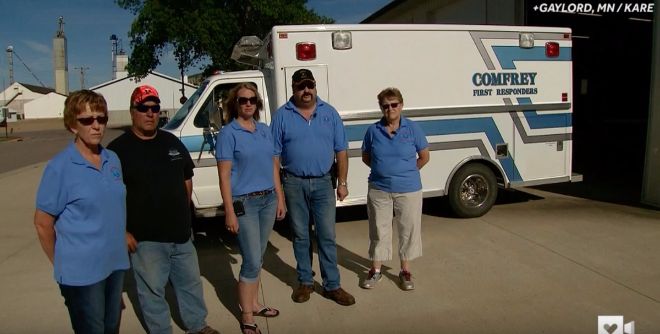 Like the EMS team in Gaylord, the Comfrey emergency responders decided what they had to with their old ambulance. They donated their old ambulance to Sanborn, a town that never had an ambulance. The Sanborn EMS team was elated to receive the gift. “You’ve never seen a happier group,” said Comfrey first responder Amber Thom.  “I mean they loved the buttons and everything. They had the lights going, the sirens going.” Prior to receiving the gift from Comfrey, responders used to use their personal vehicles for emergencies.

Watch the story of the power of paying-it-forward below.