If you had any doubt that Sen. Elizabeth Warren has her eye on the White House, it was dispelled this past weekend when she showed up on the Sunday morning talk shows to say she wasn’t running for president. 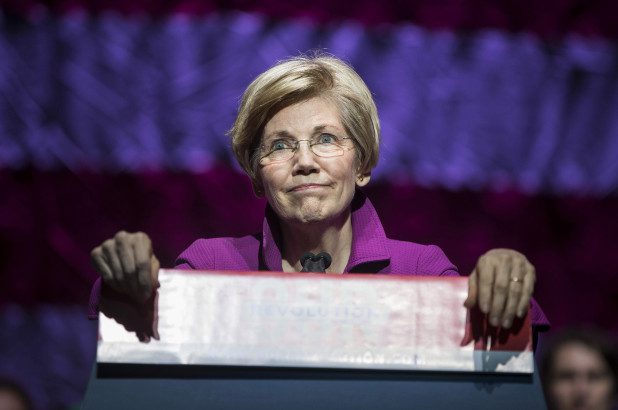 By issuing a deliberately non-Shermanesque denial, Warren signaled her strong interest in 2020. But while the former law professor has learned to speak Washington doubletalk like a native, her other tribal connections — or lack thereof — may yet trip her up.

Rather than retracting or apologizing for past assertions of Native American identity that have been refuted by genealogists and historians, the Massachusetts Democrat is doubling down on her story about being a Cherokee or a Delaware.

Last month, The Post dared her to take a DNA test to prove her story and now a Bay State paper (The Berkshire Eagle) has issued the same challenge. The test results would either compel critics like President Donald Trump to stop calling her “Pocahontas” or force her to admit it was all a lie.

But while Warren won’t take the test, she also won’t shut up about being a Native American. On the Sunday shows, she repeated the story she’s been telling for years about her parents’ epic romance in which her father’s family opposed the match because of her mother’s supposed Indian ancestry.

It’s a sweet tale — but, given that no member of her family has ever shown up on a list of tribe members or any other birth, marriage or death records dating back to the early 19th century — it’s hard to imagine why the blonde-haired, blue-eyed senator’s grandparents would have rejected her mother on those grounds.

At this point, she’s only a degree away from being another Rachel Dolezal, the white woman who passed as African-American while becoming a local NAACP official.

Yet Warren keeps telling America that she “knows who she is” and that “no one is going to take that part of me away.”

Why is she doing this?

Like most people and politicians, Warren is allergic to admitting fault even if just saying you’re sorry and moving on from this mess would be the smart thing to do.

Then, too: In a Democratic Party where identity politics and minority status is the political gold standard, having to give up her claim would be painful.

Despite her denials of profiting from her claims of Native American ties, she likely never would have been appointed to the faculty of Harvard Law without the distinction of being the first “Indian” there. It was a key point in her rise from an obscure academic to her current position as one of the leading lights of her party’s left wing.

Last month, she showed up at a convention of Native Americans and admitted that without a tribal identity — something that must be based on actual proof — you can’t call yourself an Indian. That’s particularly true nowadays when income from casinos has enabled some tribes to prosper.

Yet she still stuck to her myth while saying she would be working to defend Native American interests. It sounded as if what she was looking for was some sort of honorary status — a modern version of “honorary Sioux” Annie Oakley — as a mark of gratitude for her advocacy.

But as perhaps she’s starting to realize the higher her ambitions, the rougher will be the treatment from the press and even popular culture outlets that liberals assume will always be on their side.

In November, Trevor Noah said on “The Daily Show” that Trump was being “woke” for calling out Warren for not telling the truth and never apologizing for her Indian lies. That should have been the wake-up call she needed. But, like taking a test that might produce the truth, that’s not something she seems able to do.

It’s only going to get worse for Warren. In 2020, she will likely be facing off in Democratic primaries against some real minorities, like Sens. Kamala Harris (Calif.) and Cory Booker (NJ). So she’s not going to get the same free pass for her Native American fairy tale that Democratic voters in deep blue Massachusetts have given her.

It’s long past time for Warren to back down. If she doesn’t, the cries of “Fauxcohantas” from Trump and other conservatives will be the least of her problems.