A family set-up cameras in their home after fearing they were being ‘stalked by a demon’ and were left terrified when they discovered poltergeist-like activity.

Robert, Pauline and their son Barry have lived in the same house in Gravesend, Kent for ten years.

However, six years ago they said they began to notice strange things happening around Barry’s room, leading them to think the 33-year-old’s room could have a ‘portal’ to the other side. 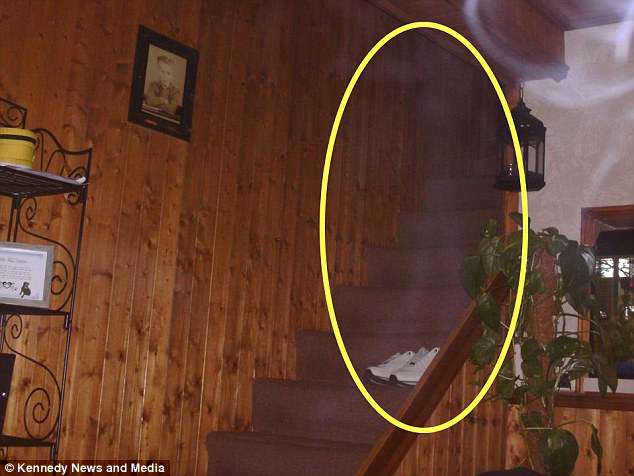 They didn’t share their surname for fear of attracting ghost hunters to their home.

Friends and neighbours apparently became too terrified to even visit the house, leading to Robert installing CCTV cameras earlier this year to try and catch the alleged spirit.

Spooky footage from the cameras showed a series of strange things happening in the house. 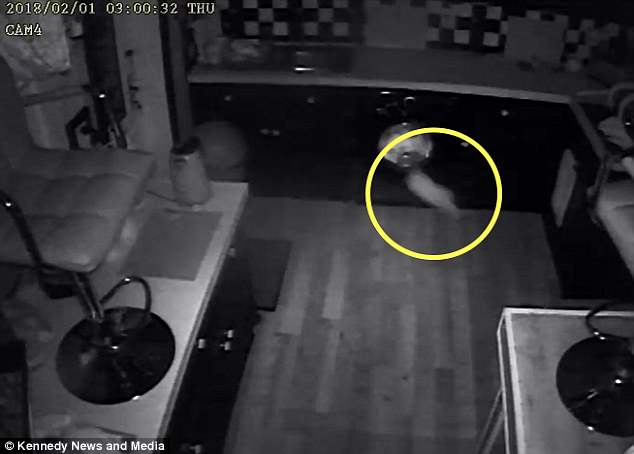 CCTV footage shows a pair of plastic gloves being flung on the floor in the middle of the night, with no one around

A mug can be seen moving on its own while Barry is trying to pour hot water into it while a pair of rubber gloves fly off the kitchen worktop and across the room.

Another clip reveals a chair turning around on its own and doors repeatedly opening and closing in the night on their own.

The family have become so freaked out that they considered bringing in an exorcist or paranormal investigator.

They decided not to in case the ‘spirit’ is a loved one.

Robert, 54, unemployed, said: ‘It’s a really freaky place to live. Friends and neighbours say they are scared to come round, particularly after dark. Not even to use the toilet. 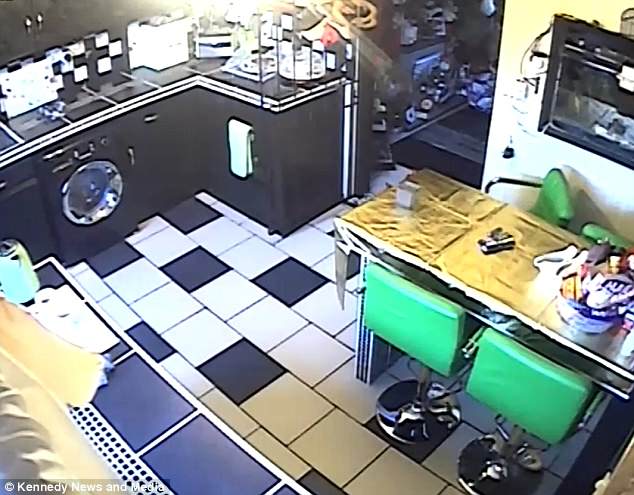 ‘When anyone does come round, they shout ‘bye’ to the ghost too. Sometimes the doors slam after they do.

‘We have talked about getting someone in to fight it but we won’t just in case [the ghost] is my mum and dad.’

Much of the alleged paranormal activity centres around Barry and his bedroom.

Incidents include people seeing or hearing him in the house when he is not in, a black shape that follows him around and doors slamming. 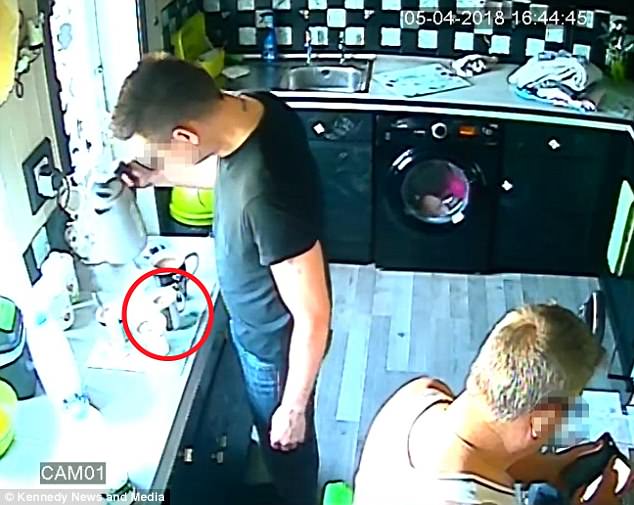 The family believe that Barry, 33 (pictured), is most affected by the ‘spirit’ with footage showing a mug moving on its own as he tries to pour water into it

Barry, a welder and martial artist, said: ‘I have seen that shadow three times in the house. But it tries to hide from me whenever I see it.

‘One time when I was going down the stairs I felt this presence behind me and turned around and saw it.

‘It’s definitely not my shadow but I can’t make out what it is as it’s like a black mass. 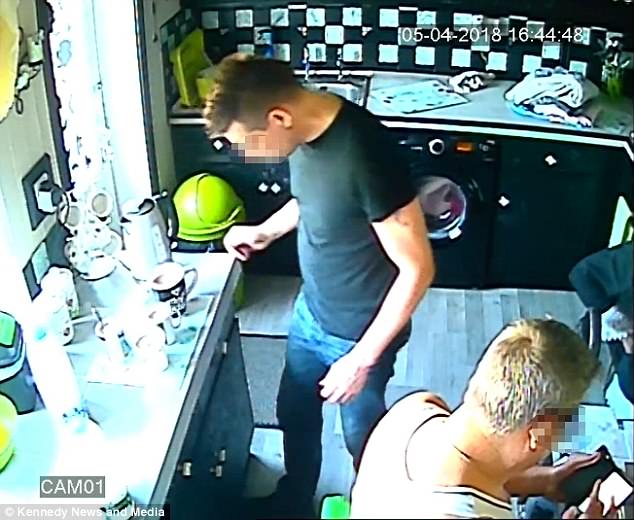 In the footage, Barry is left shocked by the cup moving on its own and can be seen checking if the surface is wet – he says it is ‘bone dry’

‘I kept waking up at 3.47am and I heard a bang and when we checked downstairs, pictures had been thrown around.

‘There was something making me feel scared. It wasn’t just in my head. There was definitely something in my room.

‘It kept trying to wake me up. The way it moves is odd. I felt dread for the first time.

‘In the end, we decided we had to get footage as something was obviously there and we wanted to prove it. 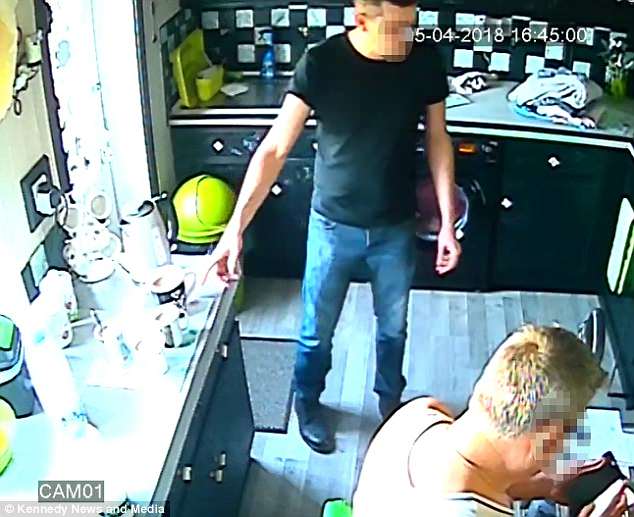 ‘So we put cameras around our home to see if we could capture it.

‘When we caught the cup move on CCTV, at first I thought it could have been water that it slid on. But I checked and the surface was bone dry.

‘Mum wouldn’t let me get away without drying the pots properly so I know the cup was dry too.

‘I feel as if there’s something attached to me. I don’t know what it is.

‘I don’t think whatever it is our family members. If it was, they wouldn’t make us feel like this. 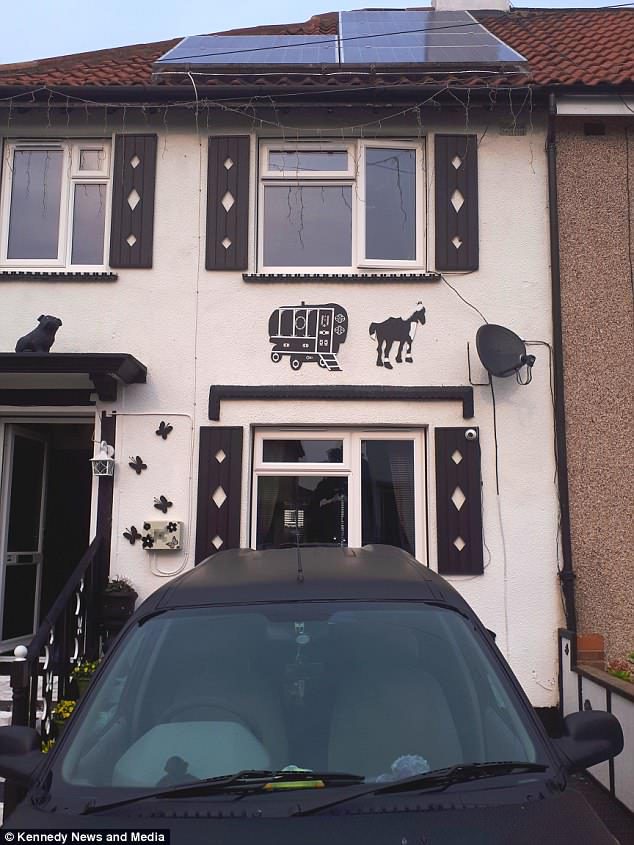 ‘It’s something else. It’s not human. I think it’s a demon.

‘It reminds me of that film Insidious, especially the big black thing I keep seeing.’

Pauline, 52, said: ‘I believe it is a monk that’s haunting our house. I know what I saw – it was not a figment of my imagination.

‘Barry’s bedroom could be a porthole. It’s following my son.’

Robert explained that Barry had seen the black shape once before when Barry was just eight or nine and he had to save his young son from climbing out of the window as it was ‘calling him’.

Robert said: ‘We have another photo of a grey shape we caught on the stairs. No one smokes in the house.

‘People come up with different ideas and I’m not saying the house is definitely haunted but there’s something going on. We don’t know what it is.

‘My mum believed all of this paranormal stuff and she said she could talk to the dead.

‘It was only after she came round to the house that these things started happening.’