Led by Stephen Hawking, scientists are using high-tech scanners to discover if a huge, cigar-shaped space object currently hurling through our solar system was sent by an alien civilization.

The object, christened ‘Oumuamua’, is a quarter of a mile long, 260 ft wide and is currently traveling at 196,000 mph. While it may just be an asteroid, researchers are taking seriously the possibility that it could instead be a spaceship.

Breakthrough Listen the name of the team of scientists, will use the world’s largest directable radio telescope, at Green Bank in West Virginia, to follow it for ten hours.

The scientists are listening for electromagnetic signals, no stronger than those emitted by a mobile phone, that cannot be produced by natural celestial bodies. It would be proof that extraterrestrial forces really could be at play if they find them. 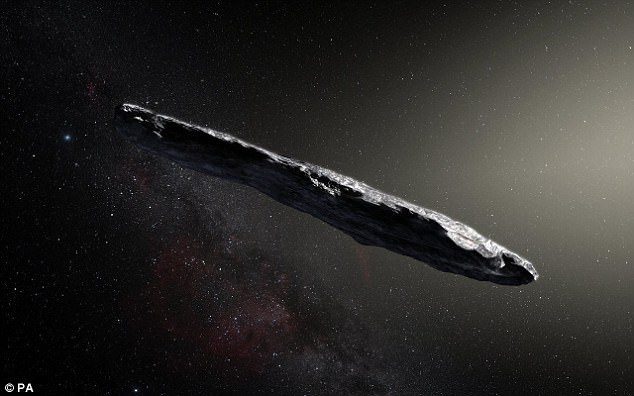 The object in question, christened ‘Oumuamua’, seen above in an artist’s impression, is about a quarter of a mile long, 260ft wide and currently traveling at 196,000mph 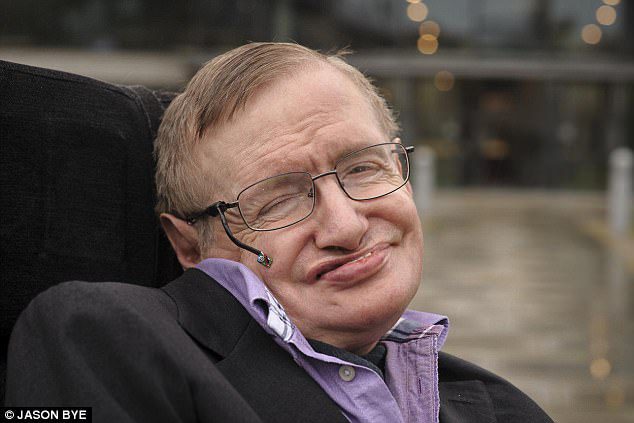 Scientists led by Stephen Hawking, pictured, are today using high-tech scanners to discover if a huge, cigar-shaped space object currently hurtling through our solar system was sent by an alien civilization

They are trying to contain their excitement, however, the name they have given this bizarre object betrays their optimism. Oumuamua is a Hawaiian term meaning ‘a messenger from afar arriving first’. (The far less sexy official name is A/207 U).

It is the wrong shape for an asteroid, they are typically round.

Hawking and his colleagues at Breakthrough Listen report: ‘Researchers working on long-distance space transportation have previously suggested that a cigar or needle shape is the most likely architecture for an interstellar spacecraft since this would minimise friction and damage from interstellar gas and dust.’

Oumuamua is flying very ‘cleanly’, without emitting the usual cloud of space dust that astronomers observe around asteroids. The experts say this suggests it is made of something dense: probably rock, but possibly metal.

The bizarre shaped object was first detected on October 19 by a long-running research programme called Pan-STARRS. Pan-STARRS uses powerful telescopes to photograph and monitor the night sky at the University of Hawaii. The amazing speed has led some experts to conclude it is the first such object to have come towards us from outside our solar system. Analysts say its faintly red color indicates it has been subjected to interstellar cosmic radiation, which is harsher than we experience in our solar system.

It doesn’t seem to have engines or show signs of propulsion that may wreck the interplanetary-spacecraft theory. Professor Avi Loeb, an astrophysicist at Harvard University, suggests it might just be coasting.

‘Perhaps the aliens have a mothership that travels fast and releases baby spacecraft that freely fall into planetary systems on a reconnaissance mission,’ Professor Loeb told the journal Scientific American. 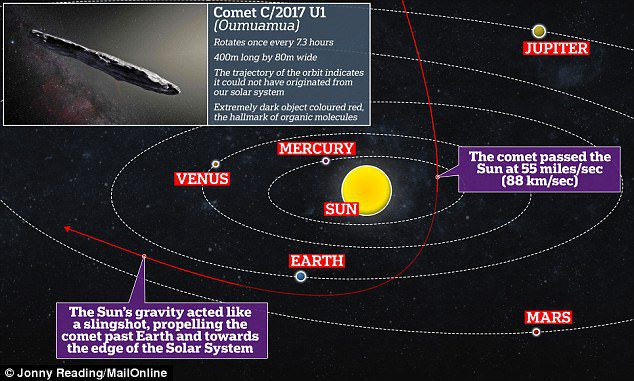 The cigar-shaped object, named ‘Oumuamua by its discoverers, sailed past Earth last month and is the first interstellar object seen in the solar system

‘In such a case, we might be able to intercept a communication signal between the different spacecraft.’ While he acknowledges that the chances of detecting alien activity are ‘very small’, Prof Loeb adds that it’s ‘prudent’ to check. After all, it could even turn out to be some sort of intergalactic Marie Celeste, the infamous ghost ship found drifting with no crew.

‘Even if we find an artifact that was left over — some space device or junk from an alien civilization — and there are no signs of life on it, that would be the greatest thrill I can imagine having in my lifetime,’ he says. ‘It’s really one of the fundamental questions in science, perhaps the most fundamental: are we alone?’ Today, we may finally find out, even if it is a bit late.

Oumuamua was first spotted already heading away from Earth, having passed within 15 million miles of us on October 15. (That’s about 85 times the distance from Earth to the moon, which sounds like it is an awfully long way, but considering the speed it travels, it’s really a squeak away.)

‘We can still get a good enough look at Oumuamua’s rear end to detect any extraterrestrial technology on board,’ says Andrew Siemion, the research center director at the Search for ExtraTerrestrial Intelligence (Seti) in California, that works with the scientists at Breakthrough Listen.

‘The Green Bank telescope’s ten-hour scan will check for any transmissions across the full spectrum of electromagnetic wavelengths,’ Dr. Siemion says.

‘It’s like a radio station you tune into with your car stereo,’ he explains. ‘Nature doesn’t broadcast on a very specific frequency — it smears it out. Technology behaves differently. It can compress electromagnetic energy. So we look for those specific signs and for repeating patterns which nature doesn’t tend to do. We look for structure.’

They are also looking for Nobel Prizes, along with a place in the roll-call of humankind’s greatest discoveries.

If Green Bank draws a blank, there is always the possibility that the aliens are using technologies that even our best kit can’t detect.

Meanwhile, Oumuamua will still present us with a host of other problematic questions.

Where did this weird object come from?

Scientists’ initial calculations suggested Oumuamua came from Vega, a star some 25 light years away in the Lyra constellation. This might be plausible, if not for the fact that, even traveling at its amazing speed, it would have taken around 300,000 years to get here.

Space doesn’t stand still, and Lyra wasn’t in that position 300,000 years ago. It’s likely Oumuamua has been traveling through space for hundreds of millions of years.

How many other Oumuamuas are there pinging about, and could they pose a lethal danger to us if they were to come rather closer than this one?

The answers to those questions: ‘a lot’, and ‘yes’.

Astronomers have finally confirmed the existence of such an ‘interstellar interloper’ may prove earlier theories true: there are multitudes of these things flying through our cosmic neighborhood.

The Astrophysical Journal report, by astronomers at the University of California, makes the bold projection that there could be as many as 1,000 interstellar visitors arriving and leaving our solar system every year — or one every three days.

Oumuamua is due to pass Jupiter in May 2018, and Saturn in January 2019. It will fade from view and leave us forever after that. But what about the others? The odds suggest that our planet has survived countless near-misses by these intergalactic speedsters, and each time one shoots past, the odds against a collision can only get smaller.

However, it is not clear what would happen if one were to hit us. A report in the respected journal Nature warns that the sheer speed of an intergalactic object such as Oumuamua would make its impact on Earth more catastrophic than any wrought by a comet or asteroid from within our home solar system. It is possible it could wipe out life on the planet, depending on its size.

The likely lesson Oumuamua brings is that we may be a cosmic hair’s width away from being smashed out of existence. Perhaps it would be reassuring if this interstellar visitor turned out to be a tin can full of aliens.