Home
Humanity
Biracial Twins Reveal What It’s Like Growing Up One Black, One White
Prev Article Next Article

A striking set of twins born with different skin colors – one black and one white- are speaking out on their unique ‘one-in-a-million’ story.

The girls Marcia and Millie Biggs reveal that at just age 11 they are already aware of racism and are daily peppered with the question ‘Are you two really twins?’

The twins, of Birmingham, England, were born on July 3, 2008 to a white mother and black father 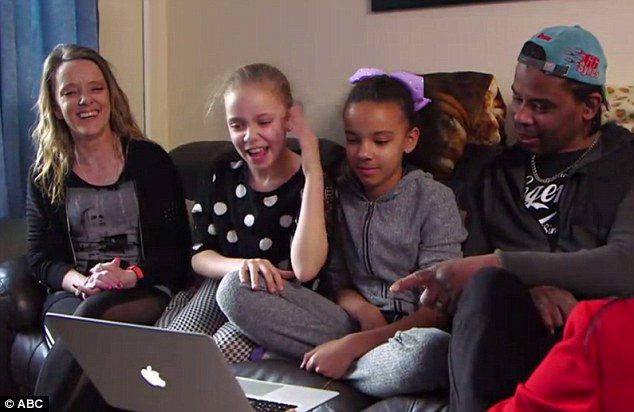 The girls wedged in between their parents Amanda Wanklin, left, and Michael Biggs, right on Good Morning America reacting to their National Geographic cover displayed on the laptop

Experts say that the phenomena, although unique, occur in one in 100 fraternal births.

Their mother calls the girls a ‘one-in-a-million’ miracle.

The girls shared the story of their race-defying appearances in the April issue of National Geographic.

Their parents, a biracial couple, said they ‘didn’t give a toss’ of what people might think of their interracial relationship and brought the same approach towards their mixed-race children. 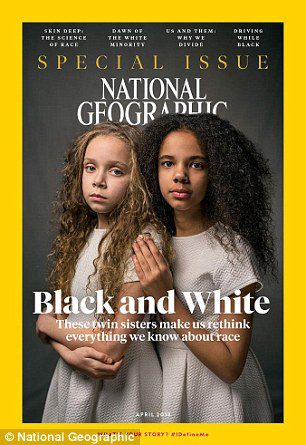 At first, the parents thought their daughters – who they gave the mixed names of Millie Marcia Madge Biggs, the other Marcia Millie Madge Biggs – were identical as they shared similar skin tones.

At about 10-months their skin began to change into more distinct colors.

‘We never worried about it; we just accepted it,’ Michael said to National Geographic.

From their infancy, the girls were scrutinized for their different appearances.

She’d respond ‘Yes’ to which the reply would always be ‘But one’s white and one’s black’.

She clarified that passersby were never hostile to the girls if anything they were curious about the contrasting appearances that made them pass off as friends rather than sisters.

‘As time went on, people just saw the beauty in them,’ Amanda said.

‘Sometimes people don’t believe us when we say we are twins. They think we’re just telling a lie,’ Marcia said to Good Morning America. 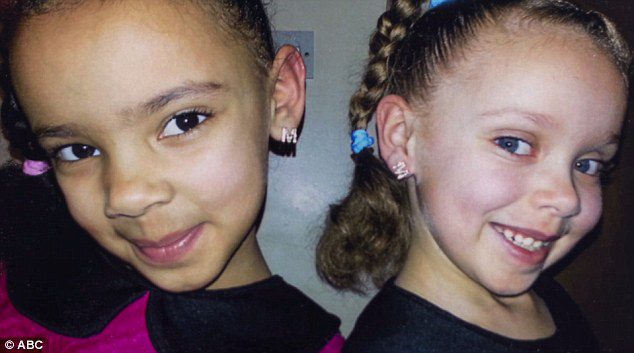 The girls share similarities in facial features but vastly differ in eye, skin, and hair color 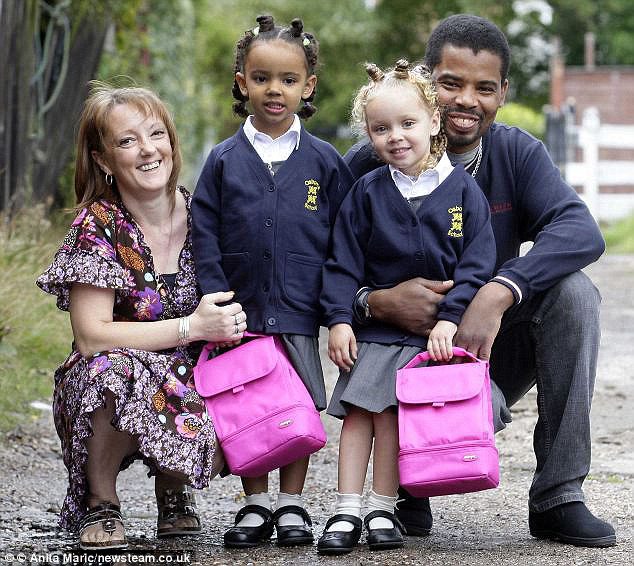 The girls, posing above with parents in matching hair and outfits heading off to school, are often mistaken for best friends rather than twins 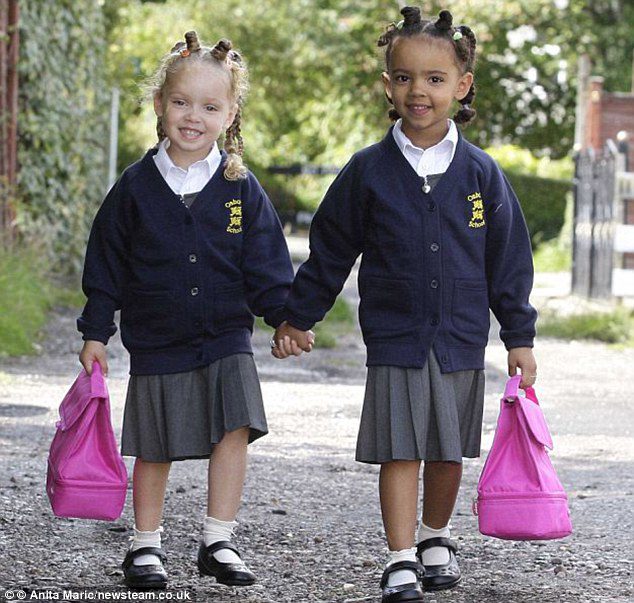 The girls reveal they are often peppered with curious questions asking if they are really twins despite one being white and the other black, but they say they never experienced racism

When speaking of racism the girls reveal they understand the concept quite well.

‘Racism is where somebody judges you by your color and not by your actual self,’ Millie said.

Marcia said racism is ‘a negative thing because it can hurt people’s feelings.’

He and wife Amanda say they’ve never seen racist behavior towards the girls. And the girls too say they never felt it either, even when people pick apart their looks.

‘When people see us, they think that we’re just best friends. When they learn that we’re twins, they’re kind of shocked because one’s black and one’s white,’ Marcia said.

Although their radical differences may seem to be the most prominent thing about them, the race is actually the farthest concern from the girls’ minds.

When asked about what made the two different, the girls began to talk about their different styles and favorite colors rather than fixating on the skin and eye colors.

‘Millie likes things that are girlie. She likes pink and all of that. I don’t like the color pink; I’m a tomboy. People are made how they are,’ Marcia said. 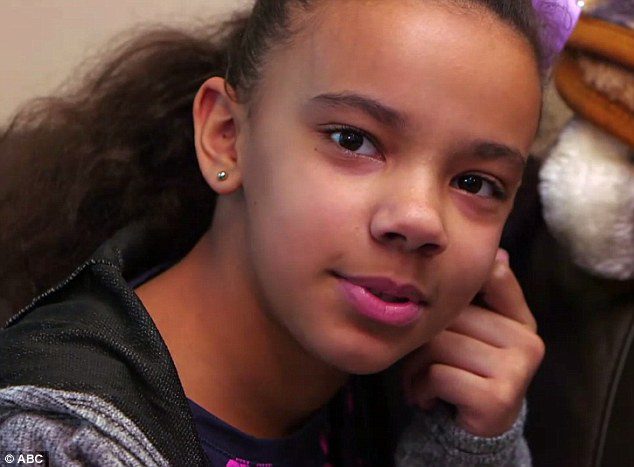 The girls, pictured above on Good morning America in March say they are very close

Their parents revealed that at first the babies seemed identical, but around 10 months their skin colors began to vary and Millie became darker 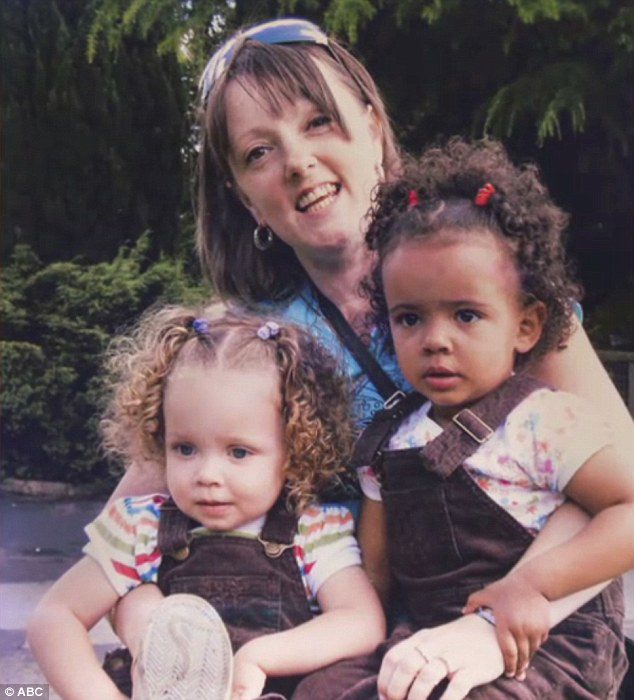 The twins, pictured with mom when they were younger, say they differ not in skin color but in that Millie, right, is girlie, and Marcia, left, is a tomboy 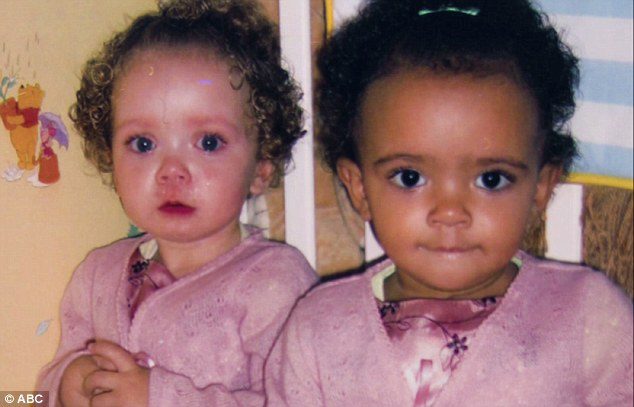 Marcia left, said: ‘I think it’s better to be different from other people because you can just be yourself’

But the girls say they don’t feel racism against them as they fit in between constructs, with parents of two different backgrounds.

‘I think it’s better to be different from other people because you can just be yourself,’ Marcia added.

The reason for their starkly different appearance is that the girls are fraternal twins, not identical, meaning that the mother’s two eggs were fertilized by two different sperm.

Therefore the girls are no more alike than any other sibling as the eggs share just 50 percent of the same DNA.

For biracial couples, fraternal twins’ traits depend on numerous variables such as the ‘where the parents’ ancestors are from and complex pigment genetics’, according to statistical geneticist Alicia Martin as told to National Geographic.

She adds that it’s not rare at all that biracial couples see their fraternal twins look more like one parent than the other.